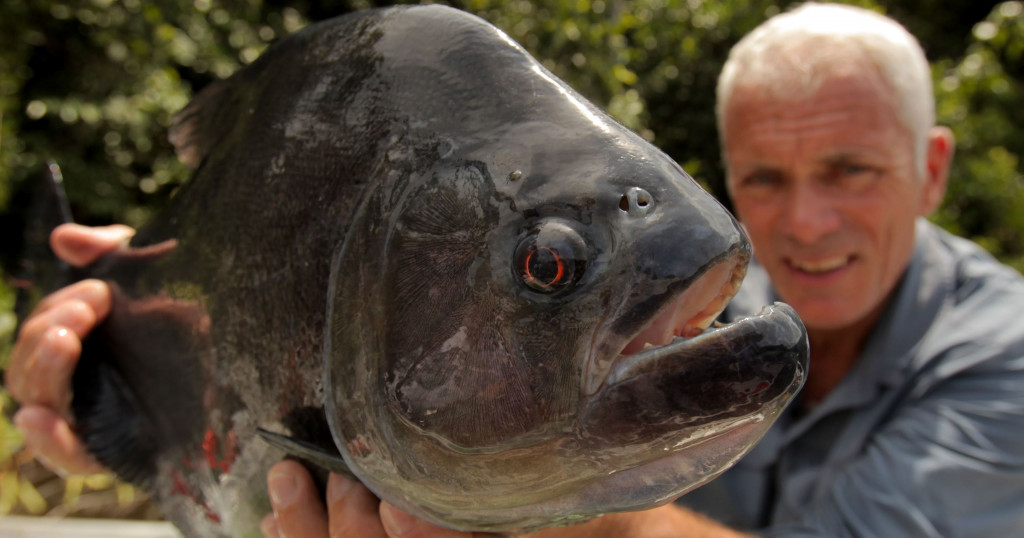 Marking the third collaboration between Jeremy Wade and Animal Planet, ‘Jeremy Wade’s Dark Waters’ follows the master angler and biologist Wade as he investigates unsolved aquatic mysteries in remote areas of the world. Previously, Wade has been seen travelling around the globe in search of the most fearsome freshwater killers, looking for clues, eyewitnesses, and stories about people who were dragged underwater by these vicious predators in the American wildlife documentary show ‘River Monsters’, produced for Animal Planet by Icon Films. Premiering on ITV in the UK, ‘River Monsters’ became one of the most watched, most successful broadcasts in Animal Planet’s history, running for a total of 9 seasons. Thus it comes as no surprise that Animal Planet decided to reprise Wade’s appearance in ‘Dark Waters’.

Produced by Icon Films, ‘Jeremy Wade’s Dark Waters’ is accompanied by additional content which includes the short-form series ‘Monster Moments’ showcasing the physical attributes of fish, sharks, and other marine animals featured in the linear series. Additionally, another four-episode digital mid-form series ‘Dark Waters: How to Catch a River Monster’ compliments the show. In this series, Wade explains the techniques, strategy and equipment used to locate some of the fish featured in the actual series.

While speaking about Dark Waters, Wade said, “These are detective stories with a difference- fishy tales from remote waters, and from right under our noses. If anybody thought that by now I’d seen it all, you’re in for a surprise- as I was.” Structured in a documentary format, Laura Marshall and Andie Claire serve as executive producers with Nicholas Head as show-runner. For Animal Planet, Lisa Lucas is executive producer with Patrick Keegan taking up the position of supervising producer.

Each episode follows the host, biologist Jeremy Wade, as he locates the bizarre, baffling mysteries of the little known underwater universe through his professional investigation. The official description reads, “He (Wade) takes Animal Planet’s audiences on journeys beneath the water in remote areas, to islands lost in time and out in the open ocean to investigate reports that include, among others, entire fish species suddenly disappearing; unexplained sightings of mythical beasts; once thriving rivers now empty; and genetic oddities that may have produced the biggest monsters yet.”

Jeremy Wade’s Dark Waters Plot: What is it about?

As mentioned earlier in the article, the new documentary series on Animal Planet, follows biologist and extreme angler Jeremy Wade in his investigation of some of the most baffling underwater mysteries on Planet Earth. “Jeremy is adventurous, passionate and one of our best storytellers. We look forward to sharing new stories and mysteries with our audiences across all screens around the globe,” said Global President of Animal Planet Susanna Dinkage. Executive producer and CEO of Icon Films, Laura Marshall adds, “Once again Jeremy invites us to wade back in to the water and takes us with him across the globe, connecting with people and stories, in his entirely original and immersive style.”

One of the bizarre underwater mysteries featuring on ‘Jeremy Wade’s Dark Waters’ follows the investigation of the mythical, Italy’s Lake Monster. According to legend, one of Europe’s most beautiful lakes guards an ancient secret. With its alleged initial sightings dating all the way back to the 16th century, the Lake Garda Monster has been described as a huge humped beast– half snake, half dinosaur. Jeremy travels to Northern Italy to investigate, but is faced with more than one possible culprit. It turns out that these lakes and rivers, despite being in one of Italy’s most populous regions, could be host to more than one enormous beast worthy of the monster title.

Another episode titled Alaska’s Lost River Kings, takes Wade to the remote American state of Alaska in his investigation of reports pertaining to the mysterious disappearance of the majestic King Salmon. His quest for answers takes him from the state’s most heavily fished rivers to the mighty Yukon River, where the King Salmon is the lifeblood of the local communities. Ultimately, Wade reaches the Pacific while following a trail of evidence that leads him to encounters with some of Alaska’s most formidable predators.

Titled ‘Return of the Outback Beast’, the third episode takes Jeremy Wade all the way to the land down under. Following a report of a suspicious underwater attack in Australia, where a diver has apparently been subject to an attack by a colossal fish in an area which is otherwise not known to be host for any such sea creature, Wade diverts his attention to its investigation. Chasing a lead, Jeremy travels to Eastern Australia to investigate, and discovers that the fish responsible for the ‘attack’ might just be a species back from the brink of extinction. Unfortunately, synopses of the subsequent episodes have not yet been disclosed. Keep watching this space for regular updates.

Jeremy Wade’s Dark Waters Season 1 premiered on April 21, 2019. Fans of Jeremy Wade-Animal Planet collaborations, ‘River Monsters’ and ‘Mighty Rivers’ really appreciated Wade’s foray into underwater adventure again. As far as the next season goes, we don’t have an official announcement yet. Though considering the fact that Animal Planet highly trusts Wade, we would be surprised if it doesn’t get another season. Our best guess is that if the show does get renewed, Jeremy Wade’s Dark Waters Season 2 can release sometime in April, 2020. We will update this section as soon as we hear more.

While we wait for season 2, check out trailer for season 1 below. Feel free to let us know your thoughts regarding Jeremy Wade’s captivating new series in the comments section.