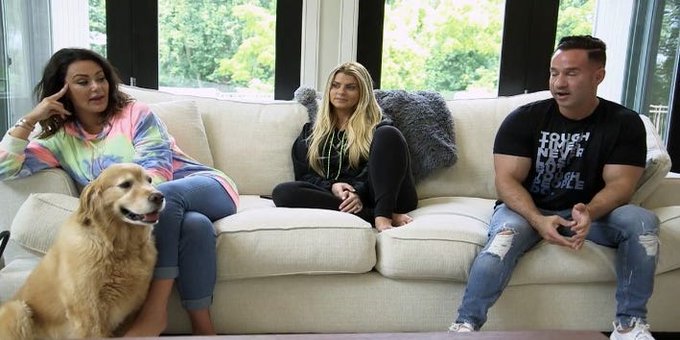 ‘Jersey Shore Family Vacation’ Season 4, which premiered with two back-to-back episodes this Thursday, sees the fan-favorite stars from the popular reality series getting cozy in the Hilton Lake Las Vegas Resort. Of course, they remain in their own bubble while adhering to COVID-19 safety norms. We also see self-shot footage of the cast as they navigate the pandemic.

The fourth season marks the comeback of many beloved stars: Deena Nicole Cortese, Paul “Pauly D” Delvecchio,” Jenni “JWOWW” Farley, Vinny Guadagnino, Ronnie Ortiz-Magro, Angelina Pivarnick, and Mike “The Situation” Sorrentino. While Snooki appears only via FaceTime in some of the episodes, Nikki Hall is seen making a recurring appearance. Ready for more drama to unfold among the ‘Jersey Shore’ “family” members? Well, our preview gives you all the details on how to stream every new episode as soon as it hits tv screens!

You can watch ‘Jersey Shore Family Vacation’ season 4 episode 3, by tuning to MTV at the above-mentioned time slot. You can also catch the show on MTV’s official website. If you don’t have a cable subscription, you can watch the show on DirecTV and Fubo TV. ‘Jersey Shore Family Vacation’ is also available on Philo and Sling TV. You can even purchase the episodes on Amazon Prime. You can additionally catch the important highlights and exclusive sneak peeks on the show’s official YouTube Channel.

The premiere episodes are titled ‘The Mediation’ and ‘Taken Pauly’ respectively. Angelina attempts to forgive the ladies, Deena, Snooki, and Jenni, after their tacky bridesmaid speeches. The trio had made cringe-worthy comments about Angelina’s partying, romances, and Staten Island roots. They even called her names like ‘the trash to our bags’ and ‘the dump to our island.’ In the season premiere, the newlywed, who is married to Chris Larangeira, explains how she is still furious over the entire chain of events. In a confessional, Angelina says: “Even if it’s a joke between us, I don’t think it should have been said in front of people that don’t know those jokes. I thought it was a little f***ed up.”

Finally, over a group chat, following the wedding, Jenni, Deena, and Snooki apologize to Angelina. Meanwhile, Ronnie has invested in a CBD company and has moved to Los Angeles, after selling his home. Jenni is now together with her ex Zach Carpinello. Vinny visits her in her new home in Holmdel, New Jersey, which is quite near to the house of Mike ‘The Situation’ Sorrentino.

The second episode takes a new turn, with the cast dealing with the coronavirus pandemic. The group, leaving Angelina, meets on Zoom for one of their family dinners. It is revealed that Vinny has left behind his days of casual hook-ups while Pauly is dating Nikki Hall. The guys then Zoom call Angelina but nothing is solved. On the other hand, Ronnie & Pauly, wearing protective face coverings, meet up in Seaside Heights Las Vegas. This is when Ronnie meets Nikki for the first time.