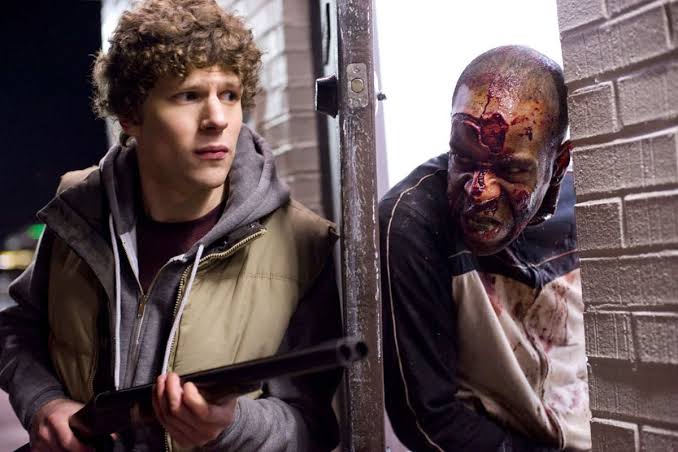 If you generate an unreasonable interest on actor Jesse Eisenberg on a fine morning and start googling for information, you may end up with reports of his awkward encounters with journalists. The reclusive actor never looks comfortable, a fact visible in his maneuvers when he mocked host Romina Puga while appearing on her show ‘Say My Name With Romina.’

Romina’s acidic reaction was she had left feeling ‘humiliated’ and her self-esteem had been ‘butchered’. That is Jesse Eisenberg for his fans, unpredictable, awkward at moments and mercurial! As a child, Eisenberg has struggled with anxiety and he took theater as a way out. He played Oliver in a theater production of the musical ‘Oliver!’ at the age of seven, and made his TV debut with the series ‘Get Real’ by 16.

Today, Eisenberg has blockbusters like ‘Batman v Superman,’ in which he plays the villain Lex Luthor, as well as ‘The Social Network,’ in which he plays Facebook founder Mark Zuckerberg to his credit. He earned more popularity as the magician in the ‘Now You See Me‘ franchise. Eisenberg has another life as a writer and has published a book of short stories under his name. At this point, the question that might be circling your mind is what is the next Jesse Eisenberg project? Well, the good news is that we have a clear answer to that question. Here’s the list of upcoming Jesse Eisenberg films and tv shows scheduled to release in the near future. We can only hope that these latest Jesse Eisenberg movies and tv shows will be as good as some of his recent ones. 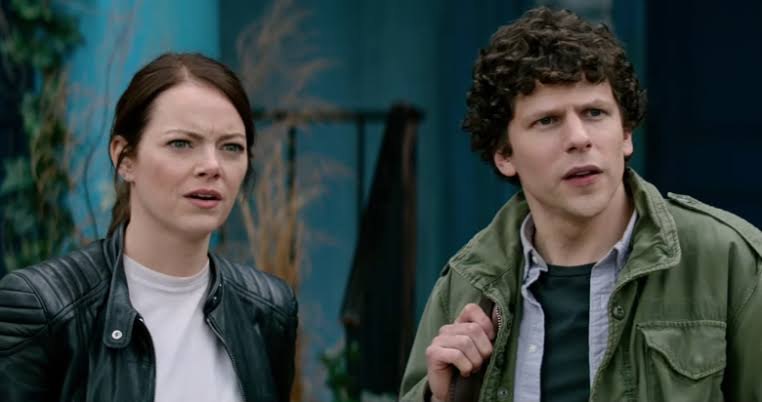 The news of the second coming of the ‘Zombieland‘ created quite a buzz among the fans of the 2009 cult horror-comedy. Director Ruben Fleischer returns for the ‘Zombieland’ sequel, titled ‘Zombieland: Double Tap’, with scribes Rhett Reese and Paul Wernick, who also wrote the first film, and David Callaham joins the writing department as the new entrant. Reports suggest that the zombie slayers of the first movie must face the threats of a new kind of zombie race, which has evolved within the time span of 10 years. Eisenberg reprises his iconic role as Columbus, while Emma Stone, Woody Harrelson, and Abigail Breslin also return. ‘Zombieland: Double Tap’ will be released on October 18, 2019. 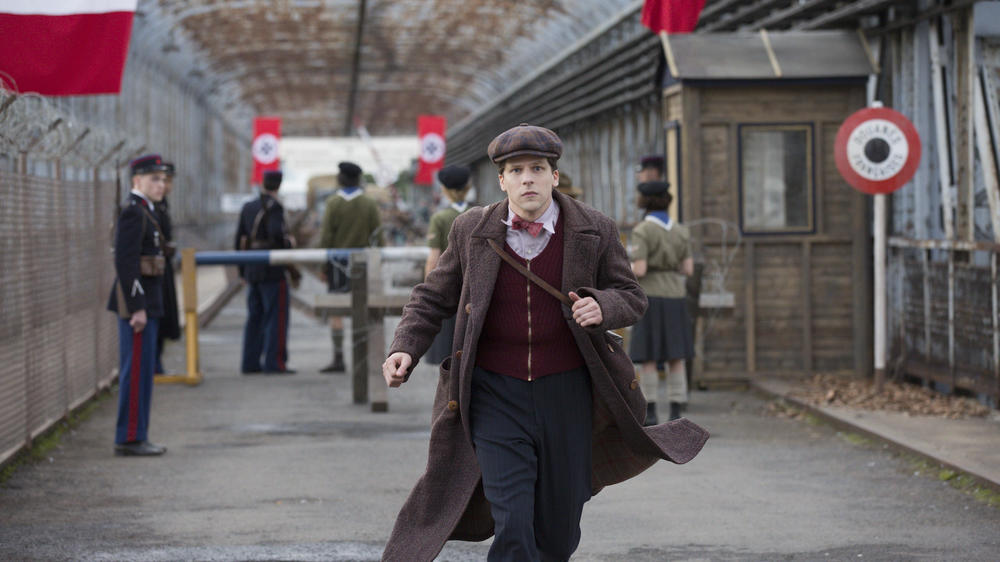 ‘Resistance,’ a World War 2 drama set in the capital city of the Czech Republic. It features Jesse Eisenberg as Marcel Marceau. The character is inspired by the real-life performer who joined the French Resistance during the Nazi invasion. Marceau coordinated the Jewish Boy and Girl Scouts and saved the lives of thousands of orphaned refugees.

‘Resistance,’ directed and written by Jonathan Jakubowicz, has the German actor Matthias Schweighöfer in a key role. The project caught the headlines for the wrong reasons when the descendants of Marcel Marceau disavowed the movie publicly. Marceau went on to become the legendary performer and mime artist in the post-war era and Michael Jackson had credited him as the inspiration for the Moonwalk. The movie is expected to hit theaters in the midst of disputes. 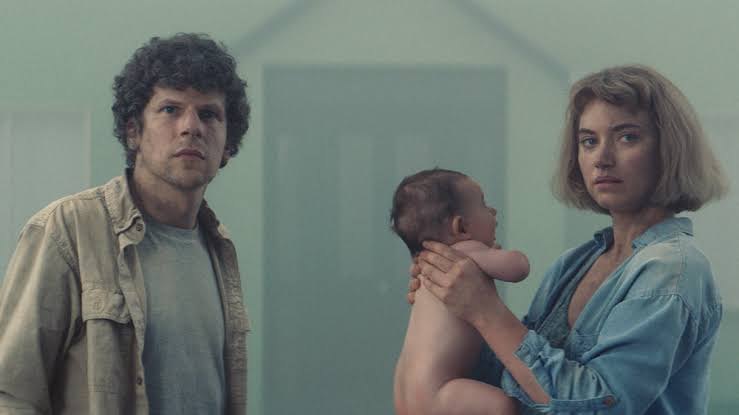 Director Lorcan Finnegan, who is known for ‘Without Name,’ has roped in Jesse Eisenberg and Imogen Poots to play lead roles in the Irish sci-fi thriller ‘Vivarium.’ Reports suggest that the movie will show Eisenberg and Poots as a desperate couple who gets lost in a labyrinth of identical houses. Trapped by a mysterious real estate agent, the couple is forced to raise an alien kid. The movie made its world premiere at the Cannes Film Festival in 2019. 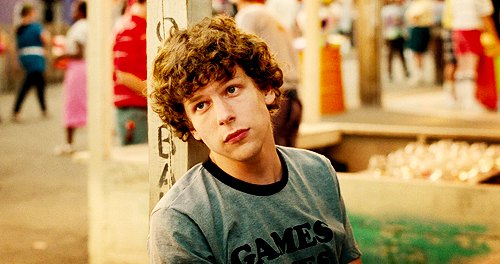 ‘Bream Gives Me Hiccups’ caught headlines three years back as Eisenberg’s directorial debut. Based on his collection of stories of the same name, Eisenberg is reportedly creating, writing and directing the comedy series. The actor called it a bittersweet comedy that follows a quietly observant child, Oscar, played by Elliot Smith, and his recently divorced mother, played by Parker Posey. Oscar keeps a diary filled with restaurants his mother dragged him to, each night, for dinner. He writes the vignettes in the janitor’s closet at school. In many aspects, Oscar resembles Eisenberg’s childhood as an observant and budding writer. However, the series has been trapped in development hell for the last three years and the release details are still unknown. 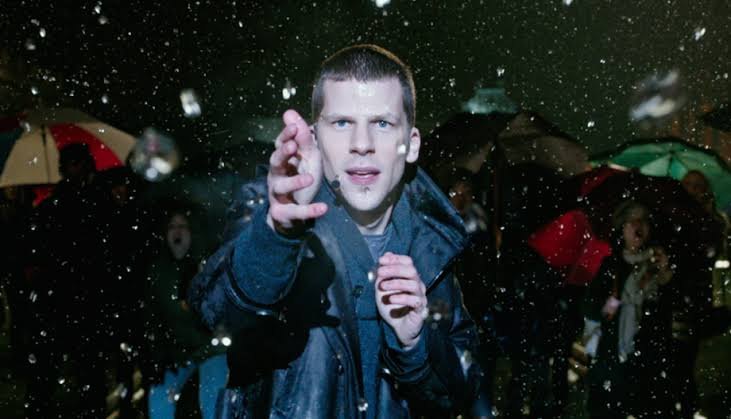 In the upcoming biopic of artist Théodore Géricault, ‘The Medusa,’ Eisenberg plays Géricault with Pierce Brosnan as his evil uncle, Caruel. Vanessa Redgrave plays the painter’s innkeeper. The movie explores the backstory of one of the world’s most famous paintings, ‘The Medusa’ and the dramatic events which inspired Géricault to create his harrowing and political masterpiece. The movie is produced by Peter Webber based on the script by Sophia Al-Maria, which she has adapted from Jonathan Miles’ 2007 book, ‘The Wreck Of The Medusa’. 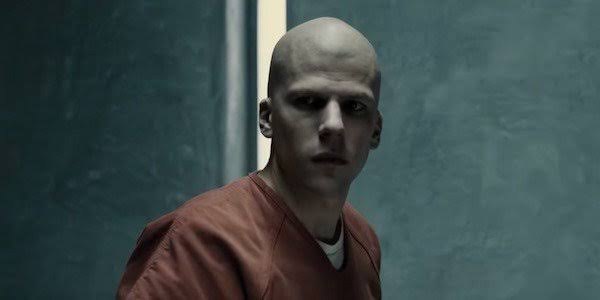 While doubts about a possible sequel to the 2017 sci-fi flick ‘Justice League’ are still around, fans are clamoring for the release of ‘The Snyder Cut,’ the original version of ‘Justice League’. The sequel has been put in uncertain waters after Zack Snyder was sacked from the franchise after the release of ‘Batman V Superman.’ In the event that the sequel is made, as announced, we can expect Eisenberg to return as Lex Luthor, the resourceful and capable villain who is Superman’s enemy but becomes a thorn in the side of the entire Justice League.

Riley Stearns’ upcoming dark comedy ‘The Art of Self-Defense,’ has Jesse Eisenberg, Imogen Poots and Alessandro Nivola play important characters. Eisenberg plays a man who becomes extremely insecure after an open attack on the street. In order to overcome his insecurity, he joins a dojo, led by the sensei, played by Nivola. In his struggle to cope-up with the insecurity and threats, he unknowingly uncovers is a dangerous underworld of fraternity and violence. The plot thickens when he aligns himself with a mysterious woman, played by Poots, who fights for survival in that world of megalomaniacs.