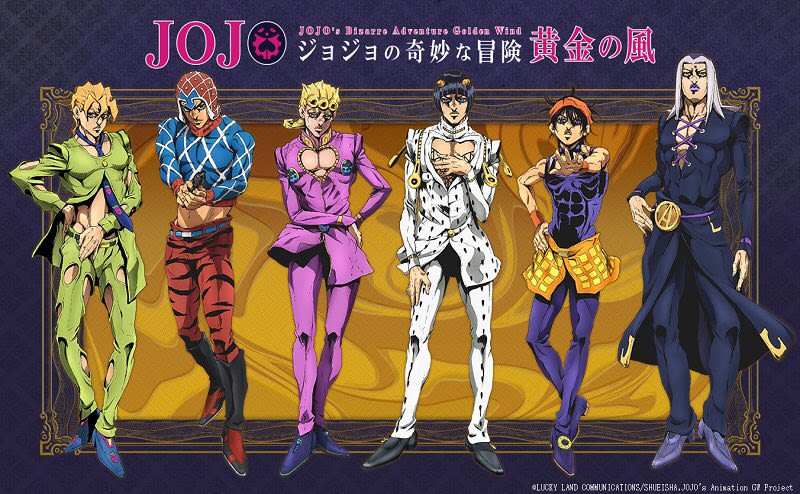 JoJo’s Bizarre Adventure (also known as JoJo no Kimyou na Bouken in Japanese) is an action anime television series which is based on a hugely popular and successful manga series of the same name. Written and illustrated by Hirohiko Araki, the manga series began serialization in the Weekly Shōnen Jump magazine more than three decades back in 1987 and new story arcs are being published even to this day.

Till date, Jojo’s Bizarre Adventure has sold more than 100 million copies in print, which makes it one of the most successful manga series in history. Understandably, a few years after it began serialization, the manga series was adapted into two separate original video animation (OVA) series in the 1990s and the early 2000s, and into an anime film in 2007. Years after these series were aired, famed Japanese animation studio David Production, in 2012, announced plans to adapt the manga series into an anime television series.

Subsequently, Season 1 of the show made its way to viewers’ screens on October 6, 2012. A couple of years later, Season 2 of the show, covering another story arc, was released on April 5, 2014. Subsequently, the show was renewed again for a third season, which made its debut on January 10, 2015. With momentum building up, David Production renewed the show for a fourth season, which premiered on April 2, 2016. A couple of years later, on October 6, 2018, a fifth season made its way to viewers’ screens, and fans are already clamouring for another season of the hugely successful show. Here’s everything we know about the prospects of Season 6 of JoJo’s Bizarre Adventure thus far.

JoJo’s Bizarre Adventure Season 6 Release Date: When will it premiere?

JoJo’s Bizarre Adventure season 5, titled JoJo no Kimyou na Bouken Part 5: Ougon no Kaze and consisting of 39 episodes, premiered on October 6, 2018 and ended its run on July 28, 2019. Hence, it’s too early to expect a renewal announcement.

That being said, we’re fairly confident that the show will be renewed for a sixth season. As it stands, the manga series has eight parts or story arcs, and so far, the show has covered five – Phantom Blood, Battle Tendency, Stardust Crusaders, Diamond Is Unbreakable, and Golden Wind. With new chapters in the manga series still being published, there’s enough source material for at least three more seasons, and it seems unlikely that David Production will stop making new seasons, especially considering the show’s commercial success both in Japan and overseas. Thus, we think that there’s a solid chance that David Production will renew the show, and you should expect a renewal announcement soon. Our best guess is that JoJo’s Bizarre Adventure season 6 release date could fall sometime in 2020 or 2021. We will update this section as soon as we hear more.

If you like watching anime shows in English, the good news is that JoJo’s Bizarre Adventure has received English dubs for most seasons. Even if a season lacks an English dub, you can be sure that it will be dubbed in future since the show is extremely popular among Western audiences too. If you want to watch the show in English, you can find dubbed episodes on Crunchyroll and Netflix (only Season 1 is dubbed on Netflix).

Read more in anime preview: Phantom in the Twilight

Although JoJo’s Bizarre Adventure has one overarching plot, each part is a separate story which ties into the overarching plot. As a broad overview, the show tells the story of members of the Joestar family, who, through one way or another, discover that they are destined to take down supernatural threats with their unique powers to keep humanity safe from harm.

Each part of the show follows one member of the Joestar family as they try and combat the existential threats posed by the supernatural. As a result, the stories are told over multiple generations, spanning nearly two centuries.

Season 1 of the show covers the Phantom Blood and Battle Tendency story arcs from the manga series. Phantom Blood is set in 1880s England and follows a young Jonathan Joestar who has to use his unique powers to stop his adopted brother, Dio Brando, from taking over the world. Battle Tendency, meanwhile, is set decades later in 1938 in New York, and follows Jonathan’s grandson, Joseph Joestar, who has to strive against all odds to make sure that the world does not end.

Seasons 2 and 3, meanwhile, covers the Stardust Crusaders story arc in two parts. This story arc is set in 1989, decades after the events of Battle Tendency and follows a high school student named Jotaro Kujo, who eventually comes to know that he is the descendant of Jonathan Joestar. After awakening powerful abilities, Jotaro then has to combat Jonathan’s old foe, Dio Brando, who has resurfaced almost a century later.

Season 4 of the show covers the Diamond Is Unbreakable story arc, which is set in the year 1999 in the fictional Japanese town of Morioh. This story arc focuses on Josuke Higashikata, the illegitimate son of Joseph Joestar. After discovering his true identity and awakening powerful abilities, Josuke has to face a formidable foe in the form of supernatural serial killer Yoshikage Kira.

Season 5, meanwhile, is set two years after the events of Season 4, and follows Giorno Giovanna, who also has connections to the Joestar bloodline. When Season 5 starts off, Jotaro, the protagonist of Seasons 2 and 3 travels to Italy to investigate Giorno and finds out whether he is of a pure heart. Jotaro then realizes that Giorno indeed has a pure heart, and the rest of the show follows Giorno and his attempts to reshape a Mafia organization for the good of the people.

Season 6, if it happens, will follow the Stone Ocean story arc and will follow, Jolyne Kujo, who is the estranged daughter of Jotaro and part of the Joestar bloodline.

As is evident from the section above, there’s no dearth of characters in JoJo’s Bizarre Adventure. With each season following a different story arc(s), each season has its own set of protagonists and antagonists. However, what is constant is that the protagonist of each season is part of the Joestar bloodline and the show is a multi-generational tale of a family’s struggle to keep humanity safe from supernatural threats.