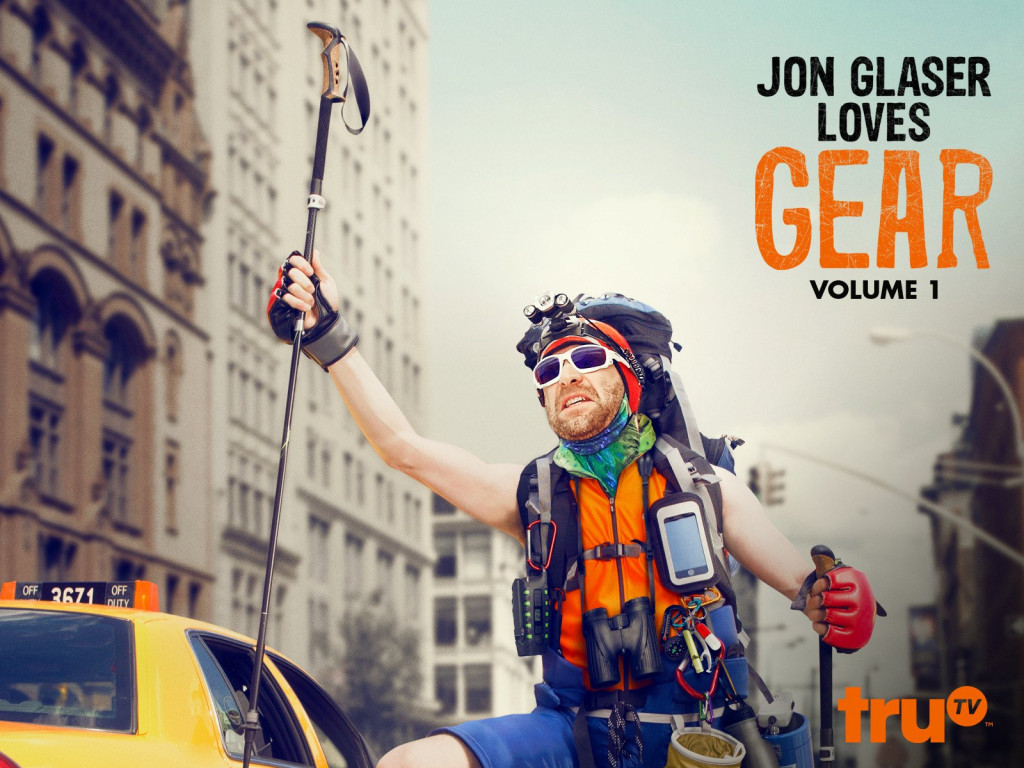 Jon Glaser Loves Gear is an American documentary television series with a touch of reality that airs on truTV. The show is hosted by Jon Glaser, playing himself and focuses on the comedian’s affection for clothing, accessories and gadgets. Jon, born as Jonathan Daniel Glaser, is an American producer, director, actor, comedian and writer.  He is a five-time Emmy award nominee and is best known for his role as a writer and sketch artist in the show Late Night with Conan O’Brien. The show premiered on truTV with the first season running from October 25, 2016, to December 21, 2016, and the second season from January 9, 2019, to March 11, 2019.

The show is primarily based on Jon Glaser, who plays himself albeit a fictional version.  He even has a “real family,” made up of people who are seen getting annoyed by his obsessions and the cameras that follow him, and a “reel family” that is paid to dote on his antics. While Eva Solveig plays herself as Jon’s fake wife, Miriam Tolan plays Leslie, Jon’s real wife. Eli Tokash plays Jon’s real son whereas Charlie Jones plays Jon’s reel son. Steve and Wyatt Cirbus, the father and son duo play themselves as the gear experts. In the series, John Hodgeman and Greta Lee, add voice to the Gear-I and Drone-I Malonie respectively.

Jon Glaser Loves Gear Plot: What is it about?

The series was initially planned as a reality show with some comedy-bits thrown in, with its characters and storylines based around a different activity in each week. In each episode, Jon tries his hand at some activity varying from surfing to photography to taking a lesson or talking with a gear expert. As he goes about his work and activities, he displays the gear he uses to complete the tasks, all the while getting into conflict with the people around him, his family, friends and co-workers.

Most of the show’s jokes come from Jon Glaser’s very own personality who is extremely obnoxious by nature and plays a jerk-like character who is pretty much willing to do anything to get some “cool shots.” As per sources, Glaser explained that when an actor plays a jerk, “You have the freedom to act obnoxiously, which, with comedy stuff, is just fun. I think it really just comes down to getting a lot of great lines”. Still, he said it hasn’t been a piece of cake to be associated with the most detestable and cringe-worthy version of himself, “Sometimes I feel like, ‘ick, I can’t do this anymore,’ — just being such a jerky version of myself, but it’s still fun.”

One of his annoying habits including shortening words to give them a cooler touch like “nature” to “naytch” and refer to the sea as “osh” ironically. Though it can be distasteful in a funny way, Glaser doesn’t mind being acknowledged for the character he plays and be associated with him. “It’s always funny to hear someone say ‘the character’ because it’s just a different version of myself,” Glaser said. “The show comes from this genuine place of I do love gear. A lot of it is scripted, but a lot of it comes from moments or things from my life.” Glaser pointed out that there are storylines, for example, his failed attempt to play hockey come from an actual experience head had in his younger days. Not unlike his reel character, the real Jon also couldn’t skate until he was in his 30s. He says, “It’s a blurred line, which is very confusing sometimes, but I think is also good.”

With the possibility of season 3 looming ahead, will Jon’s unending obsession for gear deteriorate his relationships and camaraderie, both real and fake? We’ll soon find out!

In May 2017, it was announced the truTV had ordered the second season of Jon Glaser Loves Gear judging the success of its first season. It was initially expected to premiere in 2018 but eventually, the release date was shifted to January 9, 2019. Season 2 ran till March 11, 2019. There was a gap of over two years between the two seasons. But looking at the huge popularity garnered by the past two seasons of the show, and Jon’s individual popularity, we are sure that by the end of the year we can expect an announcement with regards to the renewal of the next season. Season 3, likewise, might release sometime in January 2020, if there are no delays as such this time around. Stay tuned for all the latest bits!

While you wait for updates on season 2, you can watch the season 2 trailer on YouTube and watch all the episodes of season 1 on Amazon Prime now. So happy “gearing”!!!