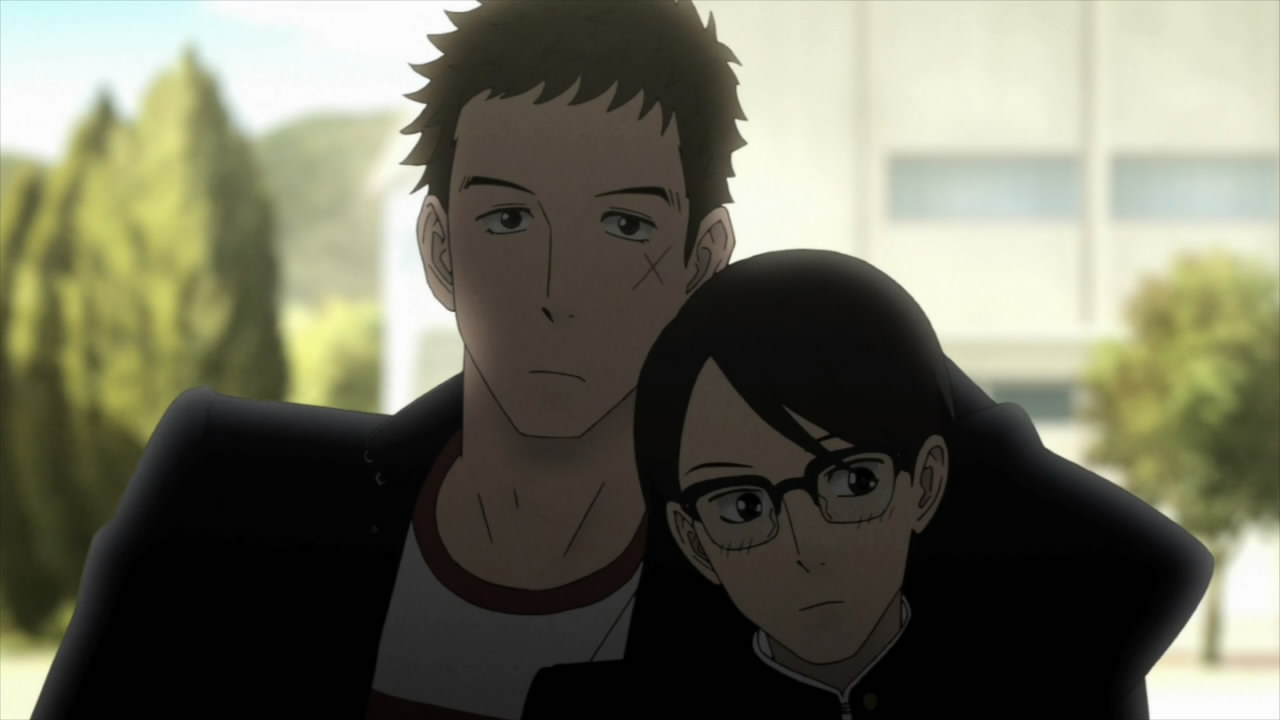 There are days when you just want to sit back, relax and listen to some peaceful Jazz music that takes you back to the 1960s when the world was a much simpler and better place. ‘Sakamichi no Apollon’ is just the perfect anime for days like these as it brings a very deep story set in the 60s along with some soulful Jazz music. If that itself is not a good enough reason for you to watch it, then the fact that it has been directed by Watanabe Shinichi (director of ‘Samurai Champloo’ and ‘Cowboy Bebop‘) along with music composer Yoko Kanno should be. With that being said, the music of the anime has to be its “main event” for obvious reasons. The OSTs in this one are not merely background scores but are actual tone setters of the melancholy and drama in the show. And if you carefully notice, even the way in which the characters play their instruments also reflects a lot on their personalities and art style.

Initially, one might think of dropping the show for its simplicity and shounen-less theme. But there are already so many other shows that are airing the same old complex love triangles and “friendship above all” stories; so why not go for something new? We already live in a world that is quite complicated and sometimes it’s just good to indulge ourselves in shows like these to escape and dive into a simpler place that has the naturalism and culture of the 60s.  ‘Sakamachi no Apollon’ is the perfect anime for a weekend binge when you really need that escape from your reality and in the end, it is simply an old school coming of age story that offers a very pleasurable audio-visual experience which can be enjoyed by pretty much anyone, especially by those who are fans of music anime.

Sakamichi no Apollon Season 2 Release Date: When will it premiere?

‘Sakamichi no Apollon’ Season 1 premiered on April 13, 2012 and with a total of 12 episodes, it ended on June 29, 2012. Jazz may not really be the talk of the town anymore when it comes to music but ‘Sakamichi no Apollonn’ definitely was and will be remembered as one of the best music anime ever made. The first season has a brilliant ending that leaves no loose strings and concludes the plot in a perfect way. But this also suggests that the possibilities of getting a new season are slightly low. Though the last two volumes of the manga were crammed in the last episode of the show, it pretty much covers all 9 volumes that exist.

From all of this, it seems pretty obvious that a season 2 was never meant to happen and it is safe to say that ‘Sakamichi no Apollon’ is going to be nothing but a one season wonder. But even then, we can expect a spin-off series that would probably revolve around the other secondary characters of the story. While there is no confirmation regarding this, a popular anime like this has a fair chance of getting renewed in one way or the other. As of now, there is nothing more to it than an amazing Season 1 but we hope that there will be more of it in the future. If we get any updates regarding its renewal, we will update this section with ‘Sakamichi no Apollon’ Season 2 release date.

The English Dub of ‘Sakamichi no Apollon’ Season 1 is available on Crunchyroll and also on Hulu along with other anime licensed under Sentai Filmworks.

Kaoru Nishimi has moved from one place to another pretty much all his life and again, after he moves to Kyushu for his first year of high school, he expects himself to be lonely and withdrawn. He drowns himself in his passion for playing the piano and also does really well at studies; but by this time, he expects to make no new friends. All of this changes one day when he meets Sentarou Kawabuchi, who is a delinquent having an immeasurable love for Jazz music.

Sentarou’s love for Jazz really inspires Kaoru to learn about the music genre and also helps him break out of his world of introversion. After he makes his first friend in school, he dives deeper into the world of music and starts practicing piano at after-school sessions that are located in the basement of another student’s family-owned record store. Soon, his love for music takes over his entire life and through this, he not only finds a sense of purpose but ends up making new friends as well. Music gives him a lot more than he could’ve ever asked for and the sheer joy that he gets from it makes his new high-school experience a very enjoyable one.

Sentarou Kawabuchi is one of the main characters of the show who is infamously known as the “East High’s Kawabuchi”. He has an undying love for Jazz music and is also a very passionate drummer. He refuses to accept that any form of music is better than Jazz and often gets into fights at school. He has pale skin, short spiky hair, and tough-looking brown eyes. He has a strong jawline and a broad muscular physique, which scares most other students. Kaoru and Sentarou are the exact opposites of each other but their love for music unites them.

Ritsuko Mukae is another main character of the show, who is a first-year student at the high-school. She has straight dark brown hair that she keeps tied up with yellow colored ribbons. She has brown colored eyes and freckles all over her nose. She is a very kindhearted girl who really cares about everyone around her. Sentarou and Ritsuko have been friends since childhood and since both of them are Catholic, they usually attend church together. Her parents own a record store which becomes an after-school jamming spot for all jazz lovers including her father, Sentarou and Kaoru.

Kaoru Nishimi is the main protagonist of the show who is really brainy when it comes to studies and is also a passionate pianist. Despite his nerdy look, he is considered to be quite good looking with his jet black hair and deep brown eyes. He sports a pair of thick glasses and holds a strong resemblance to the Jazz pianist Bill Evans when his hair is held back. He also seems to be quite tiny when compared to Sentarou. At the beginning of the show, he is an extreme introvert and even tends to throw up when he gets too anxious.

As a kid, he was forced to move from one city to another that reinforced his social anxiety. But after meeting Sentarou and Ritsuko, he starts to open up and even becomes best friends with Sentarou. He gradually gets quite close to Ritsuko as well, who later becomes his love interest. He is a classically trained pianist and later finds himself drawn towards Jazz piano music after being influenced by Sentarou. Being the prodigy that he is, he learns really quickly and within no time gets quite good at playing Jazz as well.