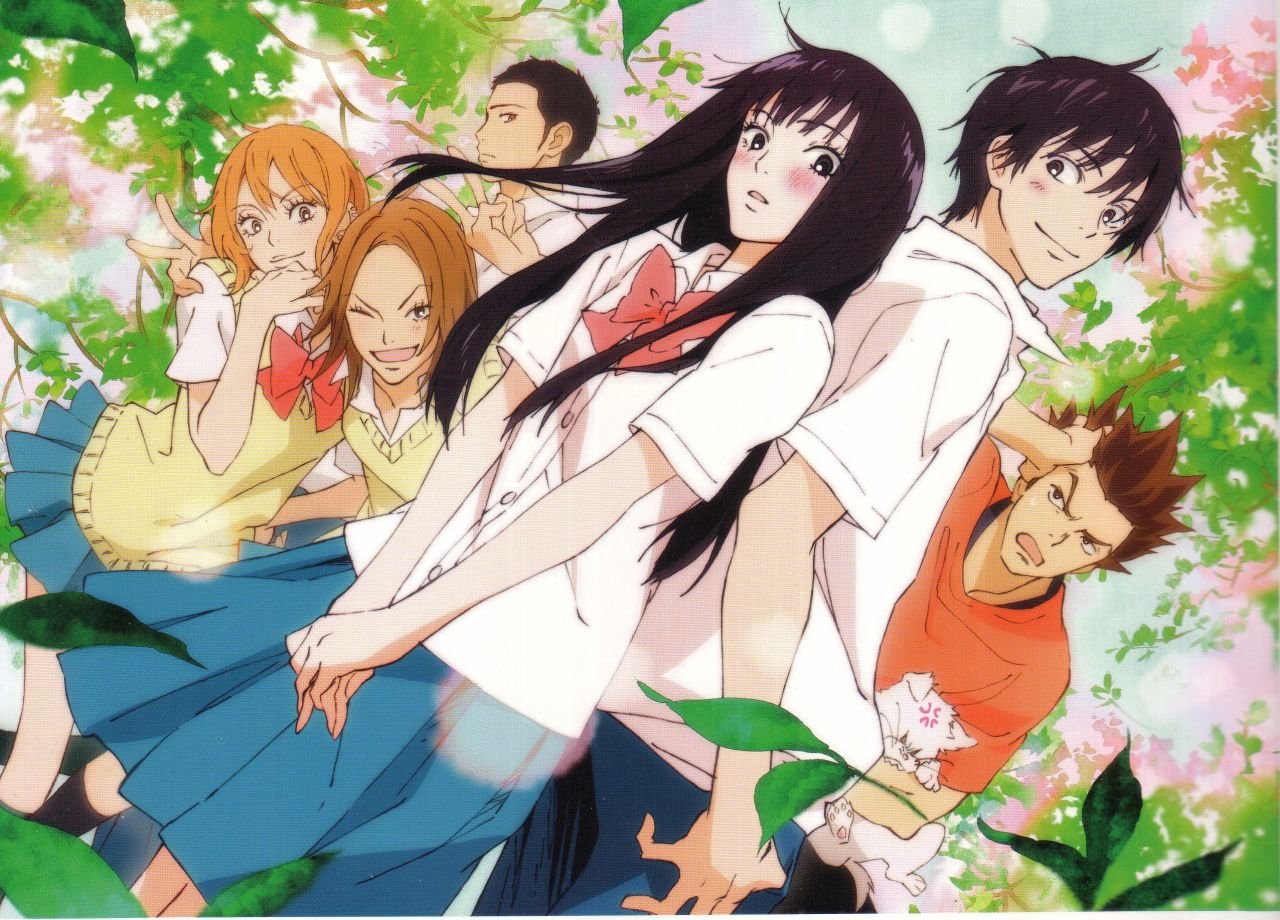 ‘Kimi ni Todoke’ is a Japanese romantic shōjo manga series written by Karuho Shiina and published by Shueisha in their magazine ‘Bessatsu Margaret’. The manga is noted for its character development and portraying human emotions in a different manner. As a result, it is massively popular both inside and out of Japan. The manga started printing in 2005 and continued till 2017, producing a total of 30 tankōbon volumes. In only its third year of printing, it won the Best Shōjo Manga award in the Annual Kodansha Manga Award, one of the most prestigious in the country.

As result of its popularity, the series expanded into various formats like light novels and video games. Two light novel series were released by Shueisha, one under Cobalt imprint and the other under Mirai Bunko imprint. There are a total of 15 volumes under Cobalt imprint with a further 13 under the Mirai Bunko imprint. These are written by Kanae Shimokawa and can be found as individual volumes on their respective portals. In addition to the original light novels, another independent series was also published by Shueisha when Karuho Shiina took a break from the manga since she was pregnant. This series replaced the original manga in the Bessatsu Margaret magazine for the time when Shiina took a break. It focuses on the time when the main protagonists met for the first time before the events of the manga.

There are two video game titles in the series, both released by Banpresto for Nintendo DS system. The first one is called ‘Kimi ni Todoke ~Sodateru Omoi~’, which follows the events of the manga as of October 2009. The second game entitled ’Kimi ni Todoke ~Tsutaeru Kimochi~’ was released in spring 2011 and picks up the story from where the first game ended. Both have received favorable reviews from critics, with praise directed towards the narrative style.

A live-action film, directed by Naoto Kumazawa, has also been released that shares the same name as the manga. It stars Mikako Tabe and Haruma Miura and was released in theatres on 25th September, 2010 with a Blu-ray format being released on 11th March, 2011. On release, it generated a total of 234 million yen in its first weekend alone, making it the second-highest-grossing film that weekend. It generated a total of $18,027,475 in Japan alone, which makes it one of the most commercially successful live-action adaptations of all time.

Kimi ni Todoke Season 3 Release Date: When will it premiere?

Kimi ni Todoke season 1 premiered on October 7, 2009 and ended its run on March 31, 2010 after a total of 25 episodes. The anime was well received and a second season was announced soon after. Kimi ni Todoke season 2 started airing in January 2011 and continued till March 2011, for a total of 13 episodes. Both seasons are directed by Hiro Kaburagi with production being handled by Production I.G. and music by S.E.N.S Project. NIS America holds the rights to the anime in North America and they released the first season on DVD/Blu-ray in January, 2012, followed shortly by the second season later that year.

There have been no official announcements about the next season so far. However, there have been talks on the internet about the third season being in production, but until we hear from official sources, we recommend disregarding them as rumors at best. Our best guess is that in the unlikely scenario of the anime getting renewed, Kimi ni Todoke season 3 release date could be sometime in 2021. If there are any developments on the matter, we will definitely update you with the details in this space.

There is no official English Dub for the anime at present. The original version with Japanese audio and English subtitles are available for streaming on Crunchyroll.

The main theme of the anime revolves around human emotions and the toll that they can take on an individual. It shows how negligence on one’s part can lead to unforeseen circumstances that affect others around them. It also lightly strives to highlight the impact of friendship on our day-to-day lives by including clever pop culture references. ‘Kimi ni Todoke’ explores the boundaries of friendship as dictated by the norms of modern society, but does not tread into taboo territory. It maintains a proper balance between the realities of modern life while expanding on the boundaries set by it.

Not for once do the incidents feel far-fetched and it allows its viewers to connect with the characters on a personal level. This is further enhanced by the meaningful conversations between the characters that truly represent the situation that they are in. This is an anime that’s very much grounded in reality and that’s the beauty of it. The writers do not take liberty at deviating from the original source material and stays pretty loyal to it. They also don’t take the freedom of introducing elements just because of the medium of expression. This is one factor that a lot of anime suffer from. As a result, people who have read the manga before feel disconnected with the anime and spend most of their time drawing parallels when they should be enjoying the experience. But in this anime, you will instantly get a feel for the characters if you have read the manga before and vice-versa. This is one thing that the anime does right and we felt that it should be highlighted before we get on to the actual story.

There is nothing much to comment on the main storyline, if spoilers are to be avoided. From the top, it seems like any other romantic manga targeted towards 13-year-olds and it does not shy away from that. In fact, it braces that concept and strives to build on it, managing to create intrigue in a setting that has been explored to the brim. For starters, the characters are pretty generic. If you have watched any other shōjo before, then you will know instantly what we are talking about. The High School setting? Check. The hopeless romantic? Check. The poplar guy in school falling in love with the unpopular girl? Check. You see? This anime does not strive to introduce new mechanics into the mix but what it does is adapt the genre and mould it around their characters in order to make the experience extremely immersive. For this reason alone, ‘Kimi ni Todoke’ has cemented its position as one of the top shōjo anime series in a modern context and we can’t recommend it enough to our readers.

The main protagonist of the story is Sawako Kuronuma, an eccentric high school student who mostly keeps to herself during the first part of the series. This is mostly due to her resemblance with Sadako Yamamura, the girl who keeps appearing out of the TV Screen in the popular Japanese movie, ‘Ring’. Due to this uncanny resemblance, her classmates and immediate acquaintances call her ‘Sadako’ and make fun of her. This has driven her away from her friends and she spends most of her time in solitude.

However, Sawako is not a loner per se and actively tries to search for friendship. Still, most of her classmates maintain a distance from her and are often freaked out by her appearance. Rumors start circulating around the school about her abilities to perceive and communicate with ghostly entities and this furthers the gap between Sawako and her classmates. Feared and misunderstood, she keeps to herself and does not talk to anyone.

Many theorize that Sawako is perhaps suffering from some mental disorder, but this is not the case. She is a perfectly normal child who has been ostracized by her classmates due to her looks, which is not under her control. To add to the matter, she is extremely modest and this prevents her from properly communicating with her classmates. As a result, we see her slowly descending down the rabbit hole until she comes in contact with Shōta Kazehaya.

Shōta Kazehaya is the male protagonist of the story and he turns out to be an extremely popular boy in school. During the school opening ceremony, Sawako comes to interact with Kazehaya accidentally. Kazehaya was searching for the way to school when he happened to meet Sawako nearby and proceeds to ask her for the directions to the school. Sawako, who is taken aback by a guy approaching her and actually talking to her, mumbles the directions much to the surprise of Kazehaya. He introduces himself and the duo walk together and get to know each other.

Sawako, desperate to strike a connection with a human being, opens up to Kazehaya, who finds out that she is actually a pretty charming lady. Sawako, overjoyed at having found someone to talk to, smiles for the first time. The two of them develop a bond that results in Sawako finally breaking her barriers and interacting with people around her. The story goes on to show how the two cope up with the struggles of high school while maintaining a romantic interest for each other. Sawako makes new friends much to the surprise of her classmates, who finally get to know her and accept her as one of their own.

Sawako Kuronuma: She’s the main protagonist of the story. An honest and hardworking high school student, Sawako Kuronuma is misunderstood and feared by her classmates due to her uncanny resemblance with Sadako Yamamura. She feels alone, neglected and spends most of her time in solitude. However, she is not a loner and longs to be friends with the people around her. One day, she accidentally meets Kazehaya who was looking for directions to the school. They both become friends and for the first time, Sawako can embrace the warmth of human interaction and friendship. She opens up to him and the two spend more time together. She develops romantic feelings for Kazehaya and expresses her love during the second year in high school.

Shōta Kazehaya: The male protagonist of the story and a man of principles, Kazahaya meets Sawako on the first day of school. They both develop a special bond, much to the surprise of their classmates, who had ostracized Sawako for her weird looks and personality. Kazehaya questions the legitimacy of these rumors as the person he regularly interacts with hardly resembles the figure described by his classmates. He soon develops feelings for her and decides to spend more time with her.