When Will Kings of Pain Season 2 Premiere on History? 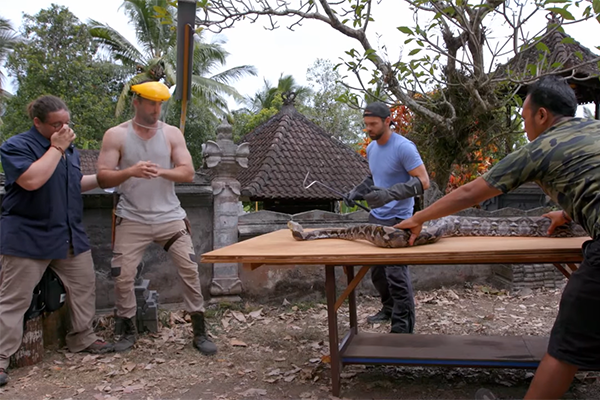 ‘Kings of Pain’ is a wildlife docuseries but with a vastly, ridiculously different and weird premise. We have seen nature documentaries where researchers film dangerous animals in the depths of the Amazon, experts navigate unexplored territories to locate the largest anaconda or scientists study the behavior of varied living beings.

However, in this History Channel show, we meet two daring persons, Rob Alleva and Adam Thron, who allow themselves to be bitten and stung by some of the most dangerous animals and insects in the world. No, they do not get attacked by mistake. They deliberately indulge in these acts. Why? To test the threshold of human pain, which would create a complete and detailed pain index that could, in the future, help in saving human lives.

The show is inspired by the research of entomologist Justin O. Schmidt, who had carried out a similar experiment in 1983 so as to devise a 1-4 scale of pain, related to insect stings. But in this series, the featured duo goes a step ahead and attempts to create a 30-point scale.

Lehrer, EVP, and GM for History, shared his thoughts on the show, saying, “While most people would flee, Adam and Rob go to great lengths safely scouring remote jungles and secluded beaches to test their pain limits in the name of science. We hope Kings of Pain will keep viewers at the edge of their seats during every scream, wince and puncture wound that brings our guys closer to updating history’s ultimate pain index.”

The show, after its launch, was well-received by fans because of its interesting premise. Now the question that naturally arises is: will there be a ‘Kings of Pain’ season 2? Well, let’s dive right into it.

Who Are the Hosts of Kings of Pain?

Rob “Caveman” Alleva, a self-taught animal handler, is always on the lookout for gathering more knowledge. To date, he has handled multiple dangerous animals and has traveled the globe to study exotic creatures. He believes that learning to deal with animals may take you a lifetime since it is a continuous process. In his past, Rob had survived after a near-death experience when he got bit by a rattlesnake. As a result, he made it his mission to educate people on how to survive attacks from such dangerous creatures.

An Australian native and a wildlife biologist, Adam Thorn has had an interest in animals since he was aged four years. A field zoologist, he studies, traps, and relocates wildlife to safe locations. Adam is also a certified snake handler, teacher, and venom expert, and hence, he is no stranger to working with dangerous creatures. Brushing with death is like a cup of tea for him. He has been chased by elephants, attacked by lions, bitten and stung many times, and nearly crushed by a reticulated python.

As a result, he has almost become immune to pain or fear. Therefore, making an actual scientific pain index that does not rely on only anecdotal evidence is Adam’s end goal. He wants to make a worthwhile contribution to science and humanity as he thinks that as humans, we have lost our limits of pain tolerance. Hence, we need real data so that we can face nature when it comes to us in all its fury.

In season 2, Rob and Adam will make their return to reprise their original roles.

What is Kings of Pain About?

‘Kings of Pain’ chronicles the multiple adventures of biologist Adam Thorn and professional animal handler Rob Alleva as they intentionally allow themselves to be bitten and stung by dangerous, venomous creatures — ranging from a reticulated python to a rove beetle. They want to create a comprehensive pain index, which would, in turn, prove to be vital in saving human lives.

Way back in 1983, entomologist Dr. Justin O. Schmidt introduced this concept where he started giving ranks to venomous, stinging insects on a scale from 1-4. In order to do this, he deliberately induced pain by getting stung by insects. He even wrote a book on this subject, titled The Sting of The Wild.

Now, Thorn and Alleva are working on Schmidt’s pain index theory and are raising the stakes even higher by attempting to create a 30-point scale — after introducing new categories such as intensity, duration, and damage. The duo wants to arrive at the ultimate guide to measure pain. Thorn and Alleva, in this ordeal, also seek the guidance of Schmidt regarding the creatures they should avoid and the measures they should take if they end up in a fatal situation.

Each episode follows the pair as they venture into the featured animal’s natural habitat, trap it without harming it, and then execute the biting or stinging act. They then rank the animal, based on the pain results. There is also a physician present on-site, in case the experts need immediate attention. Along the way, we also learn about the history of these animals.

Across the episodes, we see creatures such as the Nile monitor lizard, executioner wasp, fire urchin, rove beetle, lionfish, scorpionfish, bullet ant, piranha, tarantula hawk, giant Asian centipede and the reticulated python, among others. The search for the animals leads viewers from the forests of Bolivia to the Amazon, Indonesia, Bali, South Africa, Mexico, and Baja California.

Season 2, as and when it happens, will follow this daring duo on their quest of various other creatures in order to strengthen their research about the human pain-bearing capacity.

Kings of Pain Season 2 Release Date: When will it premiere?

‘Kings of Pain’ season 1 premiered on November 12, 2019, at 10 p.m. ET/PT on History Channel. Its entire run for the first season consists of nine episodes, with each episode spanning a run-time of 60 minutes. The series ended with its finale on January 14, 2020.

As far as the next season goes, History has not made an official announcement. But since the concept is ongoing research, it is expected to make a comeback soon enough. Our best guess is that, if things fall in place, ‘Kings of Pain’ season 2 will premiere sometime in November 2020.

Check out one of the teasers from the show, where Thorne and Alleva arrive in Indonesia and the former gets intentionally bitten by a huge reticulated python. Prior to the bite, Thorne says, “the damage this thing can inflict is massive. The best outcome is big puncture wounds in our arm that bleed a lot. Worst case scenario? We could die.” He then dons a face mask and helmet and allows the 16-feet beast to do what it pleases.