Who is Kitty on ‘The Masked Singer’? New Clues and Guesses 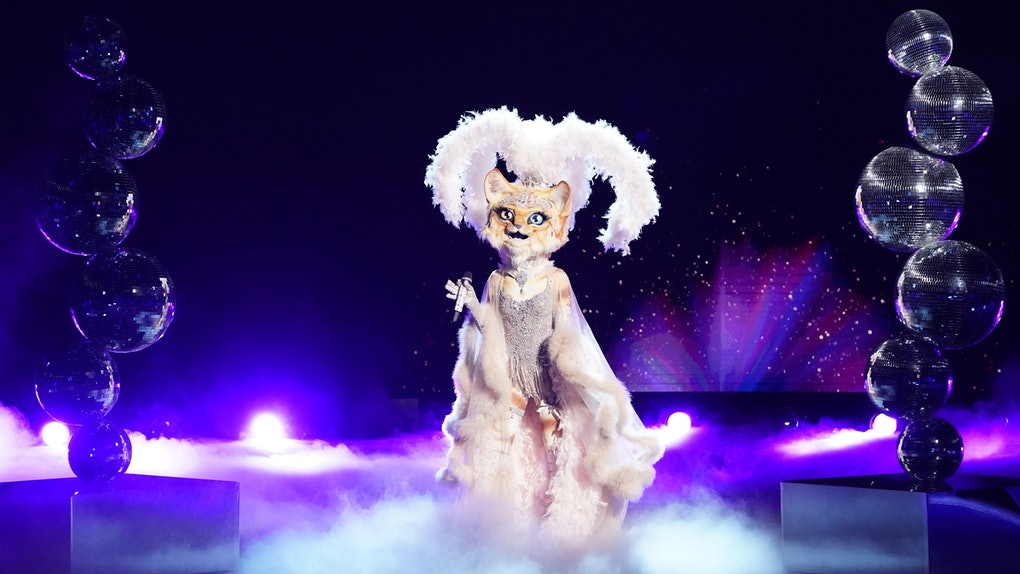 Her eyes are of two different colors, her voice is mesmerizing, and her outfit, with the feathered boa, and intricate design, has left us guessing. Yes, we are talking about Kitty, one of the most enigmatic, but powerful performers of ‘The Masked Singer‘ Group B.

Kitty first performed Ariana Grande’s ‘Dangerous Woman’, and followed up with ‘Mercy’ by Brett Young. In both cases, she has shown her vocal range, and ability to enthrall the crowd. You might be wondering about the clues and guesses regarding Kitty’s identity. We have got you covered in that regard. You can also check out the clue package below, to see if anything jumps out at you. Besides, we have attached the first clue package, right here.

Kitty’s first clue package shows clues that seem to come from a bygone era in Hollywood. We see a telescope, the moon, pirates, and a wizard. In the end, we see a rose shattering. Kitty declares that wants to wipe the slate clean and be known for what she is now than what she used to be.

In the second clue package, we see her declare that she’s been waiting for this moment forever. She also teases that she enjoys sewing, and it is her favorite thing to do. Kitty informs us that she likes making a pillow, or a dress. The sentence is peppered with two clues, ‘modern’, and ‘family’.

We catch a glimpse of a Red Riding Hood cape, as Kitty says she can feel that she’s growing into something new. After her performance, she informs us that English used to be her favorite subject in school, and she used to write her own science fiction books.

When it comes to guesses about Kitty’s identity, the theories are all over the place. Many believe it to be Emma Watson, because of the film clues, and the fact that Emma turned into a cat in the ‘Harry Potter‘ movies. You can check out a fan’s tweet about the same, below.

The Kitty is Emma Watson and no one can convince me otherwise. I have a list of clues that can lead towards her 🤷🏼‍♀️ @MaskedSingerFOX #TheMaskedSinger

One wild theory that is circulating online, is that Maisie Williams might be Kitty. She plays Arya on ‘Game of Thrones‘, and fans have taken the sewing reference to be a nod to ‘Needle’, Arya’s sword in the series. You can check out a fan’s tweet regarding the same.

I think kitty in the masked singer is Maisie Williams! The clue was needle!! That's my thoughts! #TheMaskedSinger

However, when it comes to Kitty’s identity, for the first time, we are inclined to say that Ken Jeong might be right. He guessed Kitty to be Sarah Hyland. The shattering of the rose might refer to ‘The Bachelor‘, as Hyland’s fiance, Wells Adams is a part of it.

In the second package, the words’modern’ and ‘family’, might be taken together to refer to the series that Hyland is a part of. Now that ‘Modern Family‘ is coming to an end, she might be looking for more adult roles, which might be referred to, in Kitty’s verbal clues about being seen for who she is.

Hyland’s height also seems to match Kitty’s stature, and the actress has been absent from many of the later ‘Modern Family’ episodes. This is led fans to wonder whether she could not be on the show, as ‘The Masked Singer’ was being taped at the time. To further add weightage to this reasoning, Hyland’s character, in the series, has a boyfriend named Dylan. He sings her a song titled “In The Moonlight (Do Me)”, which might explain the presence of the moon in the first week’s clue package.

While Hyland herself does not have two different eye colors, she is often confused with Mila Kunis, who does. With so much evidence, it is not hard to see why a fan reached a similar conclusion about Kitty’s identity.

Sarah Hyland is the kitty on the Masked Singer. I was 99% sure last week but when she said "Modern" tonight on the clue package that clinched it…I have to say it, she has a lovely voice.😻🐈😽

While we are not as sure about Kitty’s identity, Hyland seems to be a good guess. We just have to wait for the upcoming episode, along with its new set of clues to zero in, on the guesses.