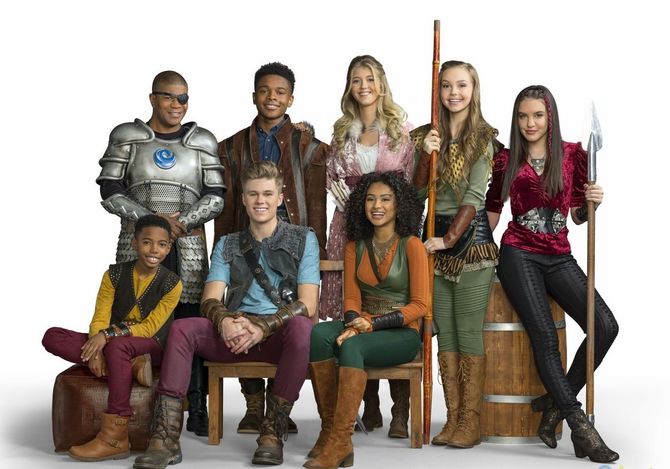 The kingdom of Astoria is under threat from its ex-king Ryker and other magical beasts. Two students, Arc and Ciara, form an alliance, despite their differences, to train together at a “magical school for knights” and defend Astoria as knights along with their other classmates Prudence, Warwick, Sage and Buttercup. If you are a fan Nickelodeon’s superhero show, Henry Danger, you will love Knight Squad. The first season of the comedy program premiered on Nickelodeon on February 19, 2018 and had 19 episodes. The series is created by Sean Cunningham and Marc Dworkin. Dworkingham Productions and Nickelodeon Productions are the leading production companies of the series.

Knight Squad Plot: What’s it about?

The plot revolves around a group of young, fearless kids belonging from the kingdom of Astoria who attend the Knight School to be trained to become powerful warriors. The feisty knight student, Ciara who hides secrets beneath her armour is teamed up with the arrogant and cocky new student, Arc who is no stranger to secrets himself. United in their aims to bring down the destructive forces that threaten the future of Astoria, they form a team to ease their way to knighthood. They hope to represent the magical land of Astoria in the battle, but that can only happen when they outclass other magical schools’ squads. LIt is not until they face their enemies that they realize that competing in the task will prove to be much more difficult than they had imagined.

Knight Squad Cast: Who’s in it?

Owen Joyner plays Arc, a thief who arrives from Seagate and cheats his way into the knight school. He gets on the Phoenix Squad so he can free his hometown from Ryker. Daniella Perkins plays Ciara; she is the princess of Astoria. She is mostly seen wearing a special ring given to her by the pixies. The ring can disguise its wearer into another person. She decides to disguise herself to protect her identity from her foes at the knight school. She is also a member of the Phoenix Squad.

Lilimar plays Sage; she is a student at the knight school and a part of Kraken Squad. She is Ciara’s rival. Lexi DiBenedetto plays Prudence; she is a member of the Phoenix Squad. As the series progresses, she finds out both Ciara and Arc’s secrets, but she agrees to keep them hidden to keep them away from trouble, especially from Sir Gareth and the King. Amarr M. Wooten plays Warwick; he is a member of the Phoenix Squad with Prudence, Arc, and Ciara. He is considered to be the worst student at Knight School. Soon he realises he can perform magic too. He is the younger brother of Fizzwick.

Savannah May plays Buttercup; she is a part of Kraken Squad. She is also a follower of Sage who is a member of the same group. She is a cheerful and sweet girl. Kelly Perine plays Sir Gareth; he is a knight with an eye patch, a metal-made left butt cheek and a metal-made left arm. He is a teacher at the knight school.

On July 27, 2018, Nickelodeon announced the second season of Knight Squad which had been renewed for an additional ten episodes. Season 2 premiered on February 2, 2019. However, even before the second season went on air, Nickelodeon decided to cancel the future seasons of the show on February 1, 2019. The reason behind it getting axed is most likely its poor ratings. The first season had an estimated 1.14 million viewers while season 2 registered a considerable drop with a viewership of only 0.81 million being recorded for its first episode.

Creator Sean Cunningham confirmed the news on both Twitter and Instagram on the last day of filming. His post read, “Today’s a tough day, but full of love.?It’s the final day shooting our series #KnightSquad We’ve gotten to make two amazing seasons with our super talented work family. Marc Dworkin and I are beyond grateful for all of them. For Astoria!”

The news was followed by an outpouring of love from fans who were in a state of denial and wished for the show to be brought back. Unfortunately, the decision will not be overturned. The cast of Knight Squad, overwhelmed with the response the series has received, expressed their gratitude to fans who tuned in to watch their show every week.

Lilmar commented, “It’s hard to express everything we’re feeling at once, but overall we’re so incredibly thankful. thankful for you guys, for patty, the amazing crew, literally everyone that helped create this show into what it is. Thank you for bringing so much, life, adventure, & FUN into the sets. we love y’all so so much, thank you for trusting us to help make your ideas come to life.”

Savannah May’s statement read, “I want to thank our fans for tuning in every single week to watch our show. I love going on Twitter and seeing their reactions to new episodes. Their support has meant the world to all of us and to any followers that haven’t seen it yet, they totally should. It’s an upbeat, magical and hilarious show that even has a few secrets within the characters. You won’t be disappointed.”