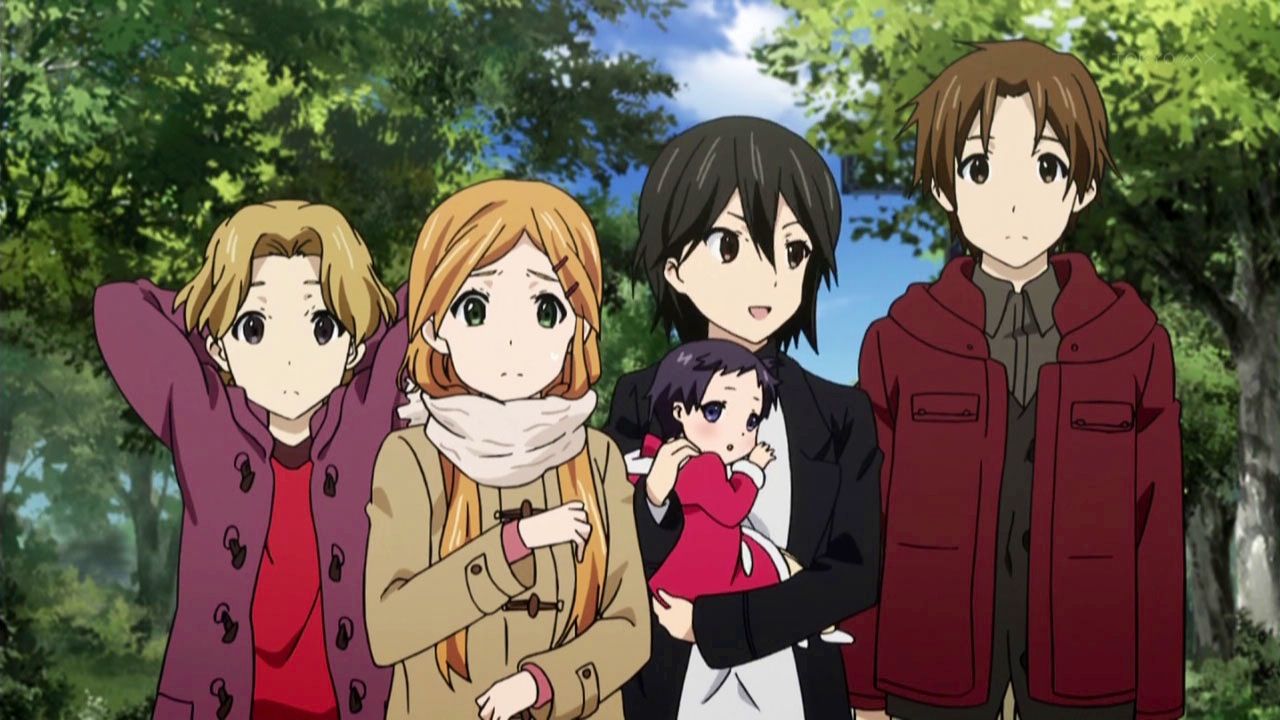 ‘Kokoro Connect’, also known as ‘Hearts Connect’, is a Japanese light novel series written by Sadanatsu Anda, with illustrations provided by Yukiko Horiguchi under his pen name Shiromizakana. The series was originally titled ‘Hito Tsunagari Te, Doko e Yuku’ and was put forward by Anda into the 11th Entertainment Awards hosted by Enterbrain in the year 2009 where it managed to win the special prize. Realizing the potential of the novel, Enterbrain announced that they will be publishing the series under their popular ‘Famitsu Bunko’ imprint but decided to change the title to ‘Kokoro Connect Hito Random’. The first volume was published on January 30, 2010 and continued till March 30, 2013, producing a total of 10 volumes. A separate side-story collection was also released for the series on the 30th of September later that same year.

It is also adapted into two separate manga series, one published by Enterbrain and the other published by Kadokawa Shoten. The first manga adaptation, illustrated by Cute, began serialization in Enterbrain’s popular magazine, ‘Famitsu Comic Clear’ on October 22, 2010 and ended on August 23, 2013. The series is compiled into five tankōbon volumes and was released by Enterbrain between May 14, 2011 and September 14, 2013. Seven Seas Entertainment announced in 2014 that they had licensed the series in North America and released the first volume in August of that same year. The second manga adaptation published by Kadokawa Shoten began circulating in their magazine ‘Nyantype’ from August of 2012 and continued till April, 2013. It is titled ‘Kokoro Connect On Air’ and features original artwork provided by ‘Na!’. Only a single volume has been released to date with no further plans to expand on the same.

The anime adaptation is massively popular among fans of the series despite several issues plaguing the show from the start. It is directed by Shin’ya Kawatsura, with screenplay provided by Fumihiko Shimo. The characters are designed by Toshifumi Akai with the background score provided by Toshiki Kameyama. If one is familiar with the Drama CD of the series, then they will be able to instantly connect with the cast of the anime as Silver Link decided to feature the same actors. This provides a seamless transition from the Drama CD to the anime, making it more accessible to its fans.

Kokoro Connect Season 2 Release Date: When will it premiere?

‘Kokoro Connect’ season 1 released on July 8, 2012 and ended its run on September 30, 2012, producing a total of 13 episodes. An additional four episodes were later released on December 30, 2012 and aired on AT-X. It has since then been compiled into seven individual DVD/Blu-ray disc collections by Silver Link. The series is presently licensed by Sentai Filmworks in North America, who released the collection on DVD/Blu-ray between October 22, 2013 and December 10, 2013.

Given that the anime was produced to support the original source material, it seems highly unlikely that we will receive a second season of ‘Kokoro Connect’. This is because the original light novel hasn’t received a new installment in the last 5 years and we don’t think the anime will either. However, if they do decide to bring back the novels, then there are high chances of us getting a new season. Our best guess is that in the unlikely scenario of the anime getting renewed, ‘Kokoro Connect’ season 2 release date could be sometime in 2021 or 2022. We will update this section as soon as we hear more.

The English dub for the anime is licensed by Sentai Filmworks in North America and can be streamed online on Crunchyroll and HiDive.

The main plot of the story revolves around 5 high school friends, namely Taichi, Iori, Himeko, Yoshifumi, and Yui. They are all members of the Student Cultural Society and have developed a special bond among themselves as a result of it. Being 5 normal high school students, they have a tendency to explore and get to the bottom of mysteries but little did they know that their abilities and their friendship are going to be put to the ultimate test.

One day, while they are hanging around by themselves and trying to figure out a new topic for their magazine, Yoshifumi and Yui suddenly burst into their presence claiming that they have switched bodies. On the surface, everything looked normal except for the fact that their personalities had swapped with each other. The others are skeptical about this and proceed to mock them for their blatant tricks but the fact is confirmed when Taichi switches bodies with Iori and gets hit upon by their class president, Maiko Fujishima. After a lot of deliberation, which mostly involves the group trying to convince Himeko that the incidents are real, they eventually come to believe in it after Taichi and Iori switch back bodies. They make their way back home trying to make sense out of the events that took place during that day.

The next day, they reach school to find out that they have all switched bodies and this creates a lot of confusion among the group. They decide to excuse themselves from their classes until they can get down to the bottom of the mystery. It is during this time that they receive word about a new transformation, this time with their homeroom teacher. This character walks up to them directly and introduces himself as Heartseed and explains that he is the reason behind the mysterious events but disappears quickly without them being able to confront him. They spend the rest of the day with each other sometimes swapping bodies randomly and wondering about the effects that this will have on their friendship and social life. They are eventually seen taking advantage of these swaps from time to time in order to further their chances with their romantic interests. This causes tension among the group as they try to come up with a solution.

Taichi Yaegashi: Taichi is considered by many to be the main protagonist of the show, even though it really revolves around five people. A huge wrestling fan, he decided to start the cultural club in their school along with the others as they did not have any clubs that they could join. Soon after, he becomes good friends with them and also develops feelings for Iori. However, Iori keeps rejecting him as she feels that he does not know the real her. They eventually get into a relationship but that too does not last long. Finally, Taichi comes to terms with his feelings and decides to follow his heart instead of his brain.

Iori Nagase: An easy-going personality and the president of the cultural club, Iori is the desire of many guys in her high school, including Taichi. She is extremely fragile, both within and out, which is probably due to her having grown up with an abusive stepfather. She is quite unsure of her true personality as she is used to molding the same to match the circumstances that she is put in. This ultimately has an effect on her love life as she is unable to decide whether Taichi actually knows her as a person. Owing to the dilemma, they both break up and remain friends.

Himeko Inaba: Himeko is quite the opposite of Iori as she always has a direct approach towards problems which might sometimes rub off in the wrong way. Initially, she was a part of the computer club in her high school, but quit the same due to a fight with the president and joined the cultural club as the vice president. Often the most rational among the group when they are faced with trouble, she is unable to confess her feelings for Taichi even after promising that she would.

Yui Kiriyama: Yui was initially a part of the Fancy Club before it was disbanded, at which point she decides to join the cultural club. She is extremely skilled in Karate and is quite capable of defending herself but suffers from a trauma when she was almost raped back in junior high. This shatters her confidence and as a result, avoids attention from guys, driving most of them away. However, she soon grows to trust Taichi, who helps her regain her confidence, at which point she starts dating Yoshifumi.

Yoshifumi Aoki: Probably the goofiest and perverted of the lot, Yoshifumi is a self-proclaimed member of the ‘Players Club’ and some actually believe that he takes lewd photos of teenage girls when they aren’t aware. However, beneath the playboy look lies a hopeless romantic who confesses his love for Yui several times but gets rejected due to her insecurities (his attitude might play a role here too). However, he is not afraid to show his love for her and showers her with affection that manages to reaffirm her confidence in men and finally accepting him as her boyfriend.