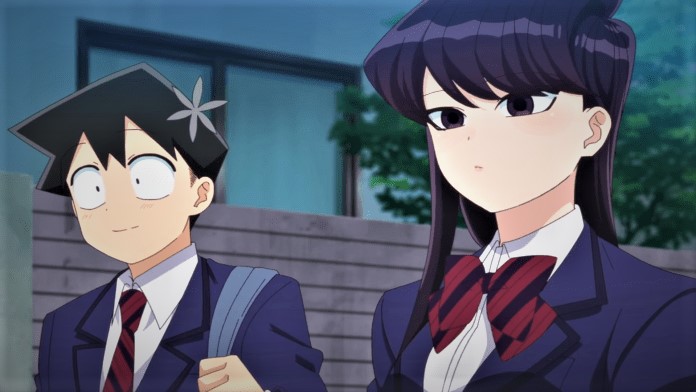 ‘Komi Can’t Communicate’ is a slice-of-life comedy anime that is based on the Japanese manga series of the same name written and illustrated by Tomohito Oda. The show follows a high schooler named Komi who struggles with crippling social anxiety, and despite her deceptive outward appearance, all she ever wanted was to make more friends. When she enrolls in a new school, Tadano, one of her classmates, realizes her reluctance to communicate with anyone and later learns about his social awkwardness.

He decides to help her new seatmate make at least 100 friends. The anime first premiered on October 21, 2021 (October 7, 2021, in Japan). Here’s everything you need to know about its upcoming episode.

‘Komi Can’t Communicate’ episode 3 titled, ‘I Want to Talk.’ is all set to premiere in Japan on November 4, 2021. It will air on TV Tokyo, Aichi, and TV Osaka at various times. OLM (formerly Oriental Light and Magic) animated the slice of life series with Ayumu Watanabe serving as the chief director and Deko Akao leading the writing staff.

Yukari Hashimoto and Kazuki Kawagoe have collaborated to compose the series of music, and Atsuko Nakajima has handled the character design. The opening theme track, “Cinderella,” is performed by Cider Girl, while the ending theme song “Hikareinochi” is sung by Kitri.

Netflix has acquired the international streaming rights of ‘Komi Can’t Communicate,’ and the series is exclusively available on the platform. People with a subscription can head here to watch the latest episodes of the show.

In episode 2, Tadano decides to help Komi become friends with his non-binary childhood friend Osana Najimi. Interestingly, Najimi, who is very friendly and is friends with everyone, knows Komi. However, they is left scarred by their earlier interactions because they failed to become his friend despite an active interest. However, when Tadano is walking back to his home with Najimi and Komi, the former is proposed the delinquent Maa.

Although Najimi rejects him, Maa refuses to budge and won’t take no for an answer. Komi, who is there, tries to reason with him, but her unblinking stare frightens Maa- who immediately runs away. The incident sparks Najimi’s interest in becoming Komi’s friend again. Soon he starts spending more time with Tadano and his socially awkward friend. The childhood buddies discuss Komi’s communication problems, and Najimi suggests that she must get a complicated coffee order by herself.

Although she tries her best, the protagonist makes a mess of the order and ends up getting the wrong coffee. The inability to communicate feels like a curse to her, and she starts crying because of her helplessness. Tadano and Najimi comfort her, but they also feel that her tantrums are cute. In episode 3, Komi will try to become friends with another classmate while Najimi and Tadano will push her to confront her stage fear.