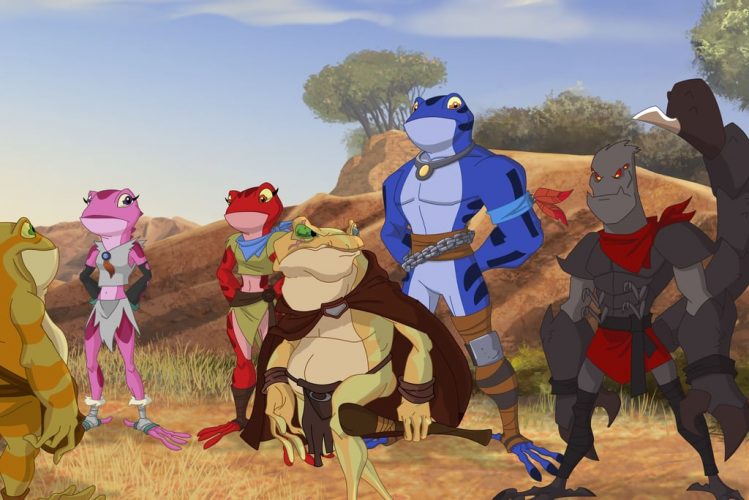 Kulipari: Dream Walker is the second season of Kulpari after its first season ‘An Army of Frogs’ made its debut in September 2016 on Netflix. It is an animated television series whose animation has been undertaken by Splash Entertainment. The show takes inspiration from a novel series titled ‘An Army of Frogs. Kulipari: Heritage’ which is a four-issue comic book penned by Trevor Pryce, and serialized from August to November 2016. It is directed by Chuck Patton and produced by Paul Cummins, Trevor Pryce, Steve Rosen, Liz Young, and Mike Young.

Meanwhile, between 2017 and 2018, three compilation movies were made available on Google Play, Amazon, and iTunes and were titled ‘Kulipari: An Army of Frogs’, ‘Kulipari: Mercenaries’, and ‘Kulipari: Amphibian’s Rise’.

Kulipari Cast: Who’s in it?

Kulipari basically revolves around Darel who serves as the central character of the series with Apari and Acala as his parents. Gee is the fat, shy and gluttonous frog who is Darel’s closest and most loyal friend. Coorah is another of Darel’s friends and Arabanoo’s love interest. She is well versed in the field of medicine and possesses exceptional skills. Stinger is Marmoo’s bastard son and Tharta, Thuma and Tipi are Apari and Acala’s three other children and triplets.

Kulipari Plot: What is it about?

The whole series takes place in a hidden village of frogs called Amphibilands. The residents of the village all lead a safe and sound life behind the protection of magical Veil, and also the able Kulipari, an elite group of poisonous frogs. The story begins Amphibilands and the people residing in it come under the threat of a scorpion army headed by the powerful Spider Queen with magical powers. This is where our hero enters Darel, the non-poison frog who always hoped to join the Kulipari team despite his lack of qualifications. He is positioned at the front during the battle against scorpions. This is Darel’s only chance of making his dream of becoming a Kulipari come true by saving his community of frogs from the danger that befalls them.

Kulipari: Dream Walker picks up from where Kulipari: An Army of Frogs leaves off. Darel, the Blue Sky King leaves his village behind to embark on a mission to rescue a Dream Walker. While he is away, the Kulipari youth is all that safeguards his village. It is the Gecko tribe’s Chief Bindi that seeks Darel’s help for the rescue of his kidnapped son, the Dream Walker in question. Darel and his team descend upon Cardigal, and meanwhile, the Kulipari youth deal with the problem of the snake. Darel disguises himself to rescue Ponto from deep inside the Darken fortress’ dungeons. Darel takes the help of Lady Fahlga to locate Ponto. Meanwhile, Jir is poisoned, and his condition worsens. It can be cured using an antidote squeezed out from a rare flower. The Kulipari youth head out in search of the flower. Captain Killara offers Darel and his team a way to slip inside Darken’s palace without raising suspicion and avoiding detection. As Darel and his rescue troop go that way, an intelligently carved trap awaits them.

The writer of Kulipari explained in an interview, how the story of Kulipari evolved. He said, “The original version of this was not for kids. It was called Poison, and it was going to be like 300. The original idea for this had something to do with radiation having killed everything, and now the scorpions were the size of school buses. It was really bonkers. I just went there. And then, I had some friends read it, and they were like, “You can’t do that!” And I was like, “Why not?!” But, I found out that there was a cooler world in here. My son is ten years old and, as he’s grown up, he’s grown up with Kulipari. He tells me what’s hip and what’s not hip. I said, “Hey, son, how about a scorpion the size of a school bus?” And he said, “No, dad, don’t do that.”

Kulipari Season 3 Release Date: When will it premiere?

Kulipari season 2 premiered on November 20, 2018. It has 10 episodes which were released all together on the same day. Kuilpari is yet to be renewed for its third season by Netflix, but we do believe that it will get another season that should be based on the third book in the series titled Amphibian’s En. Our best guess is that Kulipari season 3 will release sometime in November, 2019. We will update this section as soon as we hear more.

Catch the trailer and all the episodes of previous seasons on Netflix.