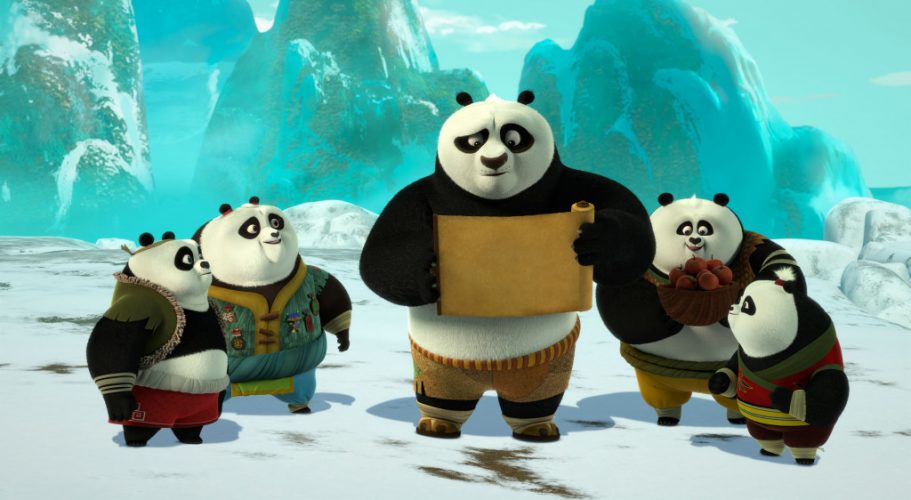 DreamWorks Animation’s quality of animation, action, humour, and heart is heralded as the best in the business and Kung Fu Panda: The Paws of Destiny is no less. It continues the title’s proud panda traditions and sets up a whole new, promising future for the franchise. The reviews on all websites are recorded to be favourable. The series was nominated at the 2019 Annie Awards in the category of the Best Animated Television/Broadcast Production For Children.

Kung Fu Panda: The Paws of Destiny Cast: Who’s in it?

Since this is an animated series, the cast is limited to voice-overs. Mick Wingert provides voice-overs for Po in both Kung Fu Panda: Legends of Awesomeness and The Paws of Destiny. The other voices include Chrissy Metz as Mei Mei, James Hong as Mr Ping and Amy Hill as Grandma Panda. There are four new young pandas who are Haley Tju as Nu Ha, Laya Deleon Hayes as Jing, Gunnar Sizemore as Bao and Makana Say as Fan Tong. Black Jack from the first series is not part of the show.

Kung Fu Panda: The Paws of Destiny Plot: What’s it about?

The official synopsis of the series reads, “Kung Fu Panda: The Paws of Destiny follows the adventures of four energetic panda kids: Nu Hai, Bao, Jing, and Fan Tong. When the friends stumble upon a mystical cave beneath Panda Village, they have no idea they’re about to absorb the chi, or energy, of ancient kung fu warriors known as the Four Constellations. Now it’s up to them to save the world from an evil force — but first, Master Po must teach them how to use their newfound powers.”

The Paws of Destiny revolves around Po and four other young pandas who are Nu Hai – the charismatic leader of the group, Bao – Nu Hai’s identical twin, Fan Tong – the innocent and devoted friend of the group who is the biggest baby in the entire Panda village and Jing – the in-training kung fu warrior who is rather unconventional in his ways. Their aim is to be a dragon master like their idol Po but all without learning the art of kung fu. They travel to Po’s home village and end up down a hill in a wagon, sending the priced stone peach statue of the village down a cliff in the process, all this right before Po is to come to town to bless it. They stumble upon a secret cave located below the Panda village and come to absorb the chi of the four revered, ancient and powerful kung fu warriors whose statues are situated in that cave.

The four warriors who got their names after the four constellations Blue Dragon, Black Tortoise, White Tiger and Red Phoenix inspire the four young pandas to greatness who then speak to Grandma Panda who in turn motivated them to train under Po in kung fu so as to save the world from all kinds of evil forces. Po, meanwhile, is convinced that the young pandas are worthless and makes attempts to avoid training them at all until one day when his master Mr Ping visits him and reminds him that he was himself extremely miserable when he began. Hence, Po begins training the four young pandas before they lose the chi they received. The young pandas end up rescuing Po with their special powers when he gets into a fight with Rat Boss’ henchmen who wish to have the chi for themselves. Po then agrees to train the young them vigorously. Po teaches them how best to employ their newfound powers and control them. Together they embark on a journey of amazing adventures, fighting battles, ferocious villains, and become legends.

Much like the movies, the series captures a similar tone and banks on it. It is ripe with an abundance of humour comedy along with a healthy dose of adventure and drama.

Kung Fu Panda Season 2 Release Date: When will it premiere?

Kung Fu Panda season 1 premiered on Amazon Prime on November 16, 2018. The show went on a hiatus for some time and  returned on July 5, 2019. As far as the next season goes, we don’t have an official announcement yet. Though considering the popularity of the franchise, it is just a matter of time DreamWorks Animations announces another season or series. If the show does get renewed, Kung Fu Panda Season 2 is expected to release sometime in 2020. We will update this section as soon as we learn more.

You can catch all the action from the Season 1 on Amazon Prime. You can watch the trailer below.