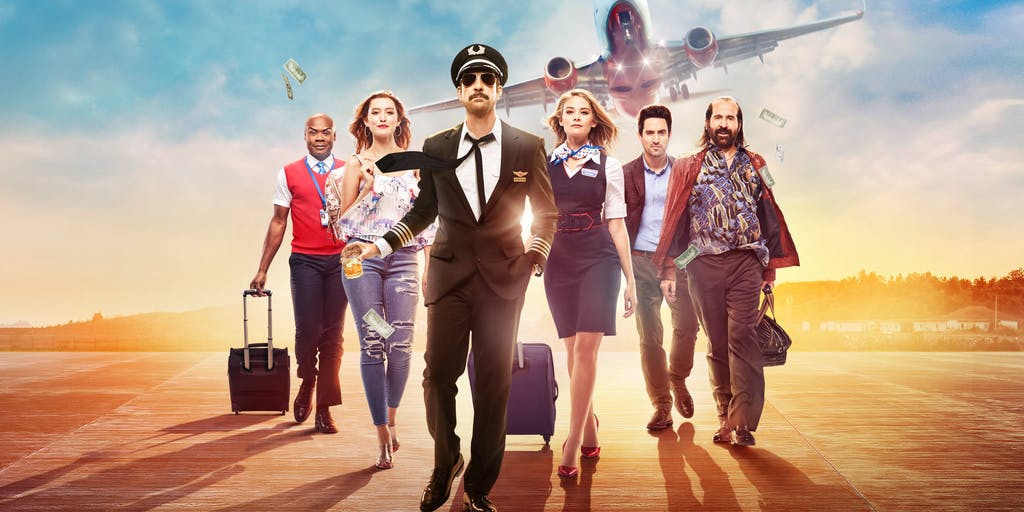 ‘LA to Vegas’ is American comedy sitcom TV show, created by Lon Zimmet. The show airs on Fox, and first premiered on January 2, 2018. The series revolves around regular passengers and a crew traveling from Los Angeles to Las Vegas in a budget airline known as Jackpot Airlines.

Traveling is always a drag, but it also provides us the opportunity to meet several remarkable people, who each have their own quirks and make the trips rather fun. If you are on an aircraft, there is always the likelihood of having certain kinds of co-passengers, some who snore too loudly, some who will use the washroom innumerable times, even if it is a short flight, some kid who will be screaming their lungs out.

There have not been many comic takes on traveling, especially on airplanes. In fact, the last best comic take on this particular aspect was ‘Airplane!‘, which remains one of the best spoofs made on airport disaster films. Anyhow, ‘LA to Vegas’ takes a crack at making a comedy show on traveling, and it succeeds to a large extent. No wonder, it has managed to gather a pretty good fan base, and critics, too, have more or less praised it, saying, “Refreshingly lewd humor and funny, relatable characters are crammed into LA to Vegas alongside pacing problems and a dearth of punchlines, leaving this sitcom’s high-flying potential stuck in an amiable holding pattern”.

LA to Vegas Cast: Who is in it?

The main star cast of the show includes Kim Matula as Veronica “Ronnie” Messing, who is an ex-flight attendant serving in Jackpot Airlines, a budget airline, Nathan Lee Graham appears as Bernard Jasser, an attractive flight attendant who works along with Ronnie, Ed Weeks as Colin McCormack, a Britisher who is the economics professor at UCLA and travels to Las Vegas to visit his son every weekend. McCormack and Ronnie enter a romantic relationship after his separation from his wife.

Olivia Macklin appears as Nichole Hayes, who is a professional stripper, and flies between Los Angeles and Las Vegas due to her work, Dylan McDermott appears in the show as Captain David “Dave” Pratman who indulges in alcohol, drugs, alcohol, women, and what not to forget the pain of his unsuccessful marriages. He is a pilot with Jackpot Airlines after being discharged from the Air Force. Peter Stormare plays Artem, a weird Russian gambler who works as a dentist when not gambling in Vegas.

Characters from the recurring cast involve Amir Talai as Alan, who is a co-pilot, Amy Landecker plays Patricia Hayes, the love interest of Captain Dave and Nichole’s mother, Zachary Knighton is seen as Bryan, who is Ronnie’s boyfriend and a chef, Kether Donohue as Meghan who is an ex-wife of Collin’s, Alison Becker as Caroline, a flight attendant in Jackpot airline, Dermot Mulroney as Captain Steve Jasser, Pratman’s rival, Don Johnson as Jack Silver, Jackpot Airline’s CEO, and Josh Duhamel as Captain Kyle. Overall, the characters are all rich in their own way and serve to make the show funny.

LA to Vegas Plot: What it is about?

The main plot of the series ‘LA to Vegas’ is based on the lives of passengers and the crew of an airline called Jackpot airlines offering discounts, such as fixed Friday to Sunday getaway flights for Las Vegas starting from Los Angeles. The stories circles around recurring themes of disappointment and hope. Most of the action in the series takes place on the plane itself, which has no assigned seating, being a budget airline.

The formula of the episodes is to take the characters and quickly put them in situations which would be disgusting or dangerous but come across as funny. Some of the situations include trying to have sex in the bathroom or talking the pilot into making a safe landing because he happens to have the yips. Mostly, the refreshing part of the show is that it has an ensemble cast where the people are not forced to like each other. Since they are travelers or airline staff, there is space for awkwardness to exist, which makes the interactions feel more natural.

However, despite all this, the show does have some problems with the characterizations, and Variety sums this up rather well, saying, “The show’s main problem is that it hasn’t quite figured out to do with Peter Stormare and Olivia Macklin, who both play annoying regulars. Stormare, with his preternatural screen presence, can carry off anything — including singing “Hava Nagila,” extremely off-key, with a bunch of Hasidic teenagers — but his character isn’t defined beyond “weird.” More worrying, Macklin’s stripper Nichole is just “trashy,” which isn’t going to go far before it starts being uncomfortable.”

Hopefully, if there is an upcoming season, we might see the show beginning to find its voice, and focusing more on the interactions between characters. After all, it will boil down to comic punchlines between characters, if this show is to take flight (pun intended). Perhaps, if some notable star were to step in, and there had been talks of Will Ferrell coming on board, the show would find its much-required groove and begin to live up to its potential.

LA to Vegas Season 2 Release Date: When will it premiere?

‘LA to Vegas’ Season 1 premiered on January 2, 2018, and the American sitcom took off with an amazing rating and became one of the top-rated comedy shows on Fox network, which even resulted in an order of 3 extra episodes to the series but, sadly the show’s rating started dipping after that; which ultimately became the reason of its cancellation.

Though, fans should not lose all their hopes. There’s still a possibility that some other network picks up the show. If that happens, we will update you about LA to Vegas Season 2 release date.

You can watch the trailer for Season 1 below. If you have not seen the series at all, and happen to like comedies, you could give this a watch.