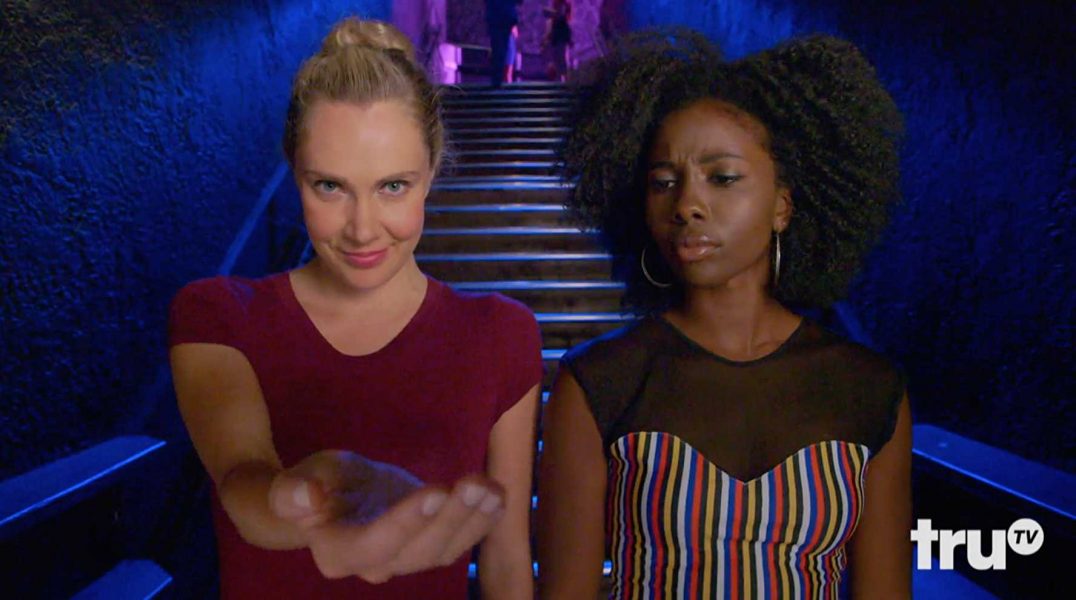 When someone cites ‘the biggest TruTV comedy feature’, it is more often than not the Impractical Jokers franchise. Consisting of a four-man central troupe, Impractical Jokers had a very reality TV-oriented approach and stood out from an average comedy special in its affinity to pranking and improvisational comedy. The fan-favourite ‘Punishment’ segment, for example, had one among the four elected as a ‘loser of the week’, who would then be nudged into living out awkward situations that would give the average cringe comedy a run for its money. While this major franchise already has its ninth season up for release in the Q1 2020 slate, TruTV had also recently opted for diversifying its comedy library. Instead of a hidden-camera cringe comedy, though, this time around it went for a more familiar formula with a twist.

‘Laff Mobb’s Laff Tracks’ is a stand-up feature, but one that uses the novelty of pre-recorded footage, and this one simple caveat sets it apart from the paraphernalia of stand-up specials and serializations.

Laff Mobb’s Laff Tracks Cast: Who is in it?

Unlike ‘Impractical Jokers’, Laff Mobb’s Laff Tracks is more closely rooted in traditional stage stand-up, and so its only de jure main cast is the host – and that’s about it. To fill in the shoes of the host, this show brings in DJ Cipha Sounds a.k.a Luis Diaz, a Bronx-based actor known for his roles in 25th Hour (2002), Look I’m Smiling (2011), and Moving On (2015).

Although it is not customary to categorize other cast and crew members under consistent main cast in a stand-up show, the dynamics here change because how pre-enacted footage becomes an integral element of the show. So other than the comics in the individual stand-up routines, we also have a set of recurring actors who pad out the session with their enactments in the pre-recorded videos.

The recurring actors here fall into both ends of the experience spectrum – while Niki McElroy (The Hustle, Wingman Class, Chain Letter, Wall-E) has been in the industry for over a decade, there are relative newcomers like Nick Navarro too. Other prominent actors to feature recurrently through the seasons include Beverley Hills Pawn-star Susan Touchbourne, Laketa Awls (Snowfall, Lovers and Friends in L.A.), and Vergi Rodriguez (Trouvaille) to name a few.

For a second season, no cast member appears to be indispensable, including the host – although a change of host is not particularly common in stand-up features.

Laff Mobb’s Laff Tracks Plot: What is it about?

The usual stand-up series will go something like this: if it is episode-specific specials (which is the most common form, with comics performing 20-minute 30-minute sets), the host will announce and introduce the comic, who will then go on stage to perform his practised and choreographed a routine. This is how it has been virtually since the inception of stand-up. In this, there is about no difference between on-screen and on-stage, since even hour-long specials are just more well-produced recordings of the stage performance with multiple camera angles to keep things fresh – e.g. Hasaan Minhaj’s Homecoming King, or any film-length Netflix special from a star comic for that matter. This is where Jamal Dedeaux and Rebecca Haze’s ‘Laff Tracks’ stands out.

Instead of simply adapting the stage with the dynamism of multi-camera setups, the show instead rethinks stand-up itself. In this show, the performances are cut by enactments (also starring the comics themselves) of their jokes. In practice, this is a welcome hybrid between a usual stand-up and something like an SNL skit.

Laff Mobb’s Laff Tracks season 1 premiered on January 3, 2018, and ran for 27 episodes for its first season – which is the longer side of things by stand-up norms. The show did not quite initially hit the Impersonal Jokers record, but it was nevertheless a good reception given how basic TruTV’s reach is.

Laff Mobb’s Laff Tracks season 2 has been confirmed and is set to release on November 8, 2019 on TruTV.

If you are looking to get a taste of the show though, the debut season will do just as well. You can find the trailer for it here.