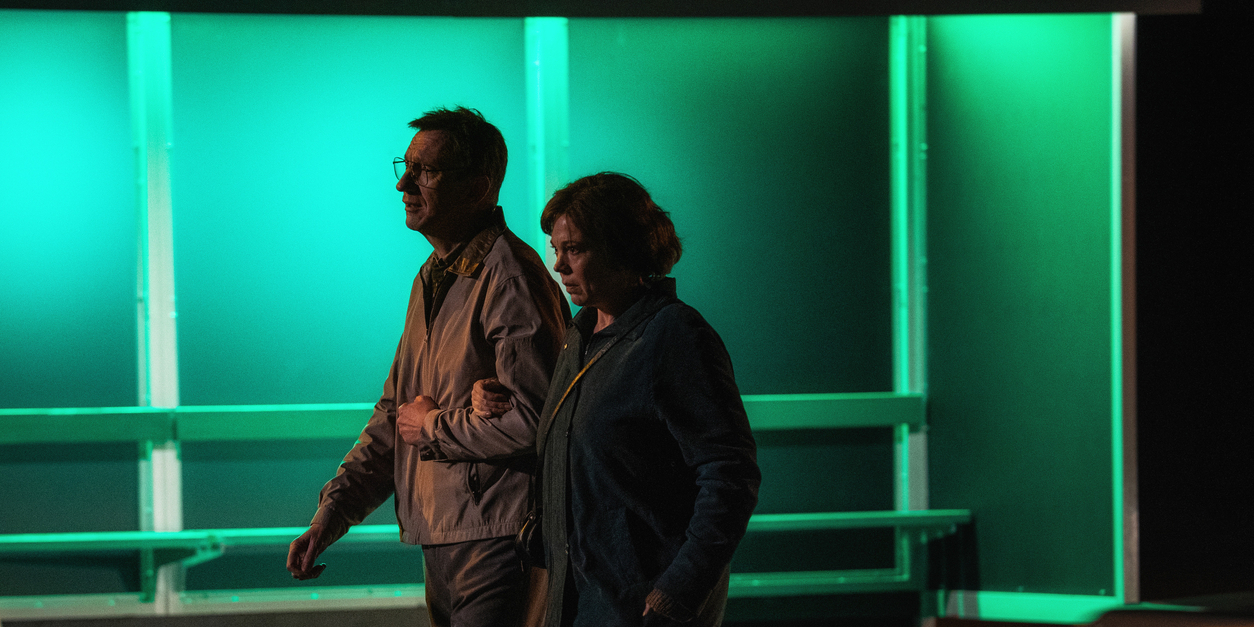 ‘Landscapers’ is a dark comedy series created by Ed Sinclair and Will Sharpe. Inspired by true events, the show follows a seemingly ordinary British couple who manage to keep a dark secret for almost 15 years. Susan and Christopher Edwards become the center of a murder investigation when the former’s parents’ mortal remains are found in the back garden of their Nottinghamshire home.

The series originally released in December 2021. With a star-studded cast and a complicated subject matter that is handled delicately, the show won over critics and audiences alike. The nuanced performances of Olivia Colman (Susan) and David Thewlis (Christopher), along with Will Sharpe’s direction, are what etch the show on one’s memory. So, it is hardly surprising that fans are anxious to know if there will be another round. Well, here is everything you need to know about the potential season 2!

‘Landscapers’ season 1 premiered on December 6, 2021, on HBO Max, with the season wrapping up on December 27, 2021, after airing four episodes. The episodes have a running time of about an hour each.

With regard to the possibility of a sophomore round, here is the deal. The show is billed as a miniseries, which means that the creators intended it to last for one season only. Moreover, the drama is neatly packed into four episodes that tie up all the loose ends of the storyline. Unlike several crime shows which revolve around solving a case, this series adopts a unique approach. It uses the angle of romance and escapism, given that the real Susan and Christopher lived in a fantastical world of cinema, so much so that they amassed a massive debt by spending money on Hollywood memorabilia.

In an interview with The Guardian in early December 2021, actor David Thewlis discussed the main idea behind the storyline. He revealed, “In the end, what we’re asking the audience to decide is not whether they’re [Susan and Christopher] guilty, because they clearly are, but whether they deserve sympathy.” And the show does an excellent job of bringing out this aspect.

‘Landscapers’ revolves around Susan and Christopher Edwards, who were convicted of murdering the former’s parents – Patricia and William Wycherley – and sentenced for life in 2014. The final episode of season 1 closes the chapter on their story at that point. Given that the real-life couple is still serving time in prison, there is not much to share about their life if the show was to continue. While having said that, it is unlikely ‘Landscapers’ season 2 will ever get made.

One of the reasons why Olivia Colman and David Thewlis’ pairing works so well in this show is their organic onscreen chemistry. In December 2021, Colman told Vogue, “We’d never met before. When I knew it was going to be David, I was so excited… It’s easy to look into each other’s eyes the whole time because you get on so well.” To that, Thewlis added, “And we’re both in relationships that are deeply loving—you and Ed [Sinclair], and me and my wife. We understand what it is to adore someone.”

We can tell that Colman and Thewlis’ chemistry worked to the advantage of the show as it truly gets one looking at Susan and Christopher Edwards quite differently, despite their horrific actions. The series highlights the real-life couple’s devotion to each other, making viewers acknowledge the more humane side of their personalities. However, the show coming to an end must have left a hole in your heart. So, if you wish to watch similar series, you can check out dark comedy-dramas such as ‘Dead to Me’ and ‘Why Women Kill.’

Read More: Where Are Susan and Christopher Edwards Now?