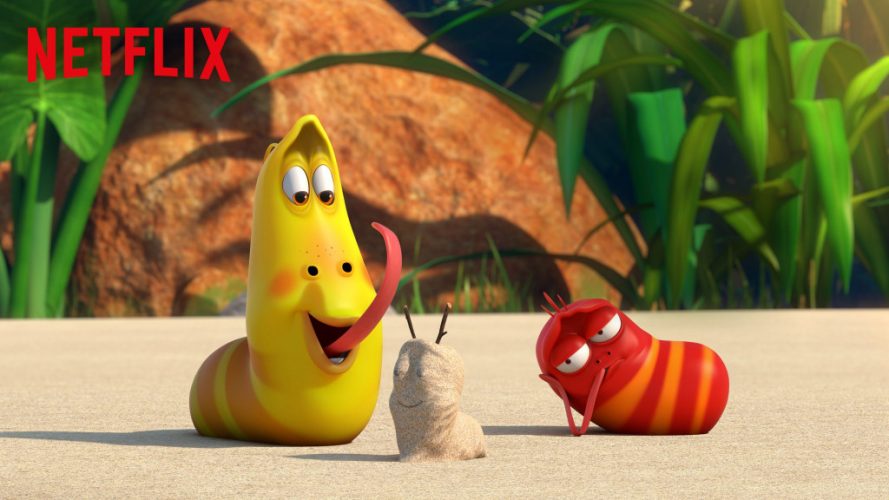 Netflix has cemented its place as a premier content provider in an increasingly competitive space among various new and existing streaming platforms. While the service providers are often recognized by their more popular young adult content which includes shows like ‘13 Reasons Why‘ and ‘To All the Boys I’ve Loved Before’, they also offer a wide range of shows in the kids‘ genre. Part of this includes the computer-animated television series, ‘Larva Island’, which Netflix first premiered on October 19, 2018.

‘Larva Island’ is a spin-off of the show titled ‘Larva’ or ‘Larvae’. It is a globally loved and critically acclaimed animated series that has gained immense popularity among worldwide audience.

Naturally, the main characters of the show are two larvae, one is named Yellow and the other Red. Yellow is a happy-go-lucky larva of the same color with antennae and often seems like a pushover. Often abused by Red, this larva remains obedient and does not let anything endanger the friendship that they share. However, Yellow will fight with Red if it comes to food, as the seasons have shown us. On the other hand, Red is hot-tempered and greedy. He often abuses Yellow, but mostly ends up hurting himself instead of hurting his friend. Over the seasons these two friends have journeyed to reach their current location, vis a vis, an island, in season 1 of the spin-off.

‘Larva Island’ season 2 introduces several new characters. Among them is Mango, a larva who Red happens to fall in love with. Chuck, the human, joins the larvae on their adventures too. The crab that gained unexpected powers and began to look like a Transformer, after eating an extraterrestrial object also returns. The blue-footed booby bird, simply called Booby on the show, spices things up in season 2. Grey, the rat, who is the enemy to all larvae season also makes a return.

Larva Island Plot: What is it about?

From season 1 of ‘Larva’ to now, the larvae have come a long way. They started in the sewers originally. Yellow and Red were shown to live under a storm drain and they would deal with the surprises that would fall from the outside world into their tiny universe. In ‘Larva’ season 2, We see the larvae settled in their new home. They were eager to explore the world outside the storm drain and reached the decision to squat in an old house nestled among high-rise buildings in the city.

‘Larva’ Season 3 took things even further and explored their travels in New York as the adventures of Yellow and Red reached a grander scale than ever before. The spin-off has placed them on an island. Here we see them interact with various creatures and try out different foods, living quite the exotic life. Netflix picked up the show exclusively from the time of the spin-off. Across the seasons, there is one unifying theme tying it all together- the show explores everything from the perspective of the larvae, making even the regular things in our world appear gigantic and giving us a sense about how dangerous everyday life is for our small-sized friends.

‘Larva Island’ Season 2 follows a blossoming romance between Mango and Red. Red, Yellow, and Mango embark on new and exciting adventures with their human friend Chuck. Love is in the air as we also see our beloved enhanced crab find a potential partner as well. However, trouble seems to be brewing on the horizon for the island dwellers, as the volcano on the island erupts. Everything goes into chaos as the inhabitants face the very real possibility of losing their home. But that’s not just the end of their misery. Grey the rat, an old enemy also returns. But in the end, you know who triumphs.

Larva Island Season 3 Release Date: When will it premiere?

‘Larva Island’ season 2 premiered on March 1, 2019, on Netflix. The first season of the show had 13 episodes and season 2, the continuation, also has 13, bringing the total episode count to 26. ‘Larva Island’ has been made by TUBAn Co. Ltd., the animation studio in Seoul, South Korea. Most of TUBAn’s body of work including the likes of ‘Dinocore’, ‘Rotary’ and ‘Oscar’s Oasis’ can be seen on YouTube. Readers might be interested to know that it is the first Korean Netflix original animation.

There’s no announcement yet from Netflix, but considering show’s popularity, it is only a matter of time before ‘Larva Island’ Season 3 release date is announced. Keep watching this space.

While we wait for an update on ‘Larva Island’ Season 3, check out the season 2 trailer to refresh your memories. If you haven’t seen the show yet head over to Netflix to catch all the episodes of the previous seasons.

Larva Island: Is it suitable for kids?

A lot of parents today have the question of whether the content passed off as kids’ entertainment is actually suitable for kids. It is a valid concern in today’s day and age and what parents should know is that the show is dominated by what can be defined as toilet humor. Kids might find themselves enjoying the sense of humor which borders on perversely gross, including urine, farts and bird poo, and some of the physical exchanges which are humorous due to the lack of limbs of the characters. However, if it is more substance and less contentious content that you wish your kids to watch, then it is advisable to give this show a miss.