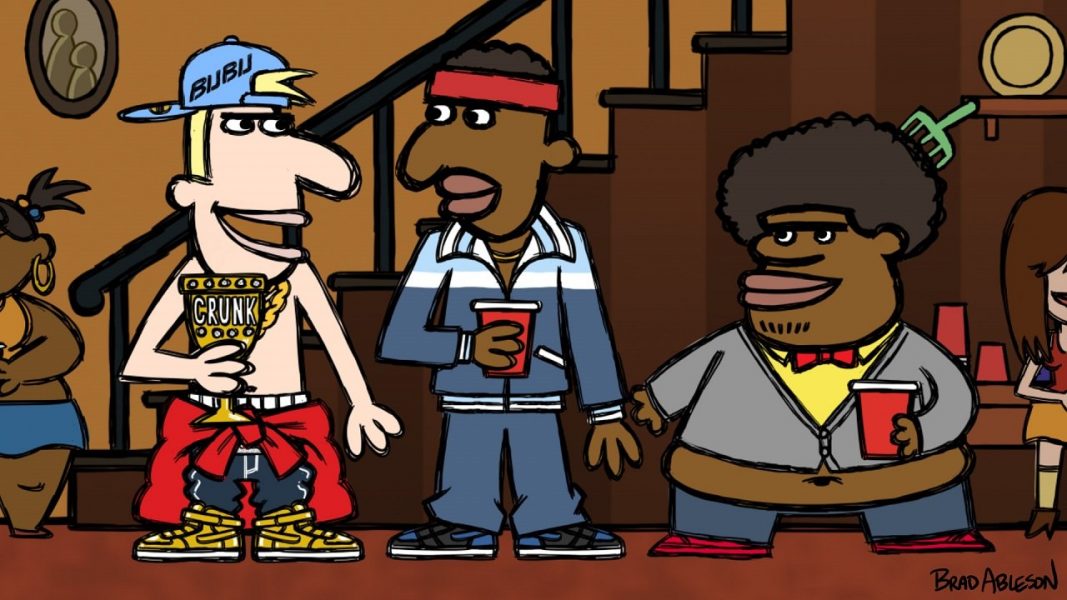 The show airs on Comedy Central and first premiered on September 14, 2016. Naturally, there have been links drawn to ‘South Park’, the other animated offering from the network, that has blossomed into an allegory for current events. While ‘Legends of Chamberlain Heights’ has a long way to go to be in the same league as ‘South Park’, it has turned controversial, since bullying and violence are showcased for laughs, with racism, and sexism being deployed in certain scenes as well. Characters sell drugs on the sides of the roads and offer to bring drugs to parties. There is a lot of “beep” used to cover up the abusive language used on the show. The animated sitcom is a big no-no for kids, though adults might enjoy the grounded reality it tries to portray. If you ask me, the fact that the show has original music by renowned musician Erykah Badu is reason enough to give it a try.

Legends of Chamberlain Heights Cast & Characters: Who is in it?

The main characters of ‘Legends of Chamberlain Heights’ are Jamal, Grover, and Milk. These characters are based on actual former college basketball players, Quinn Hawking and Josiah Johnson, who also lend their voices. Quinn voices the characters of Jamal, Shamal, and Rodrigo, while Josiah lends his voice to Grover Cummings, Milk, and Shea Butta. Michael Starrbury voices Malik Cummings, and Jay Pharoah voices both Montrel Cummings and Pete.

If there is another season, we expect all these cast members to return and lend their voices to the characters we have become familiar with.

Read More in TV Preview: Red Oaks | Z: The Beginning Of Everything

Legends of Chamberlain Heights Plot: What is it about?

‘Legends of Chamberlain Heights’ is about three inner-city boys Jamal, Glover, and Milk, who are essentially benchwarmers on their high school basketball team. However, in the minds of these freshmen, they are already legends and they harbor dreams of earning the respect of their peers by going pro one day. With this as the premise, the show introduces us to a whole roster of characters. We see that Grover prays to Lebron James, his lord, and savior. His older brother always tries to get money for the strip club with pretexts of investments, but what is really funny is his younger brother Malik, who is too woke for his own good.  Jamal makes designer drugs, while the third member, Milk, lands into trouble because he cannot stop pretending to be black.

The show has made it clear that they are not interested in making broader social commentary. Instead, they choose to go with locker room humor, but still, some of their critiques carry a sting. Milk is personified to be like every white boy who thinks they can be racist just because they have black friends. The law enforcement is no better, and we see how they are concerned about Milk getting back home safely after they break up a party, but barely spare a thought for Jamal and Grover. This is how black people are often overlooked in society.

That being said, the show also does not make adequate use of its female characters, and though it creates an immersive world, it is so bold and brash sometimes, that it appears to be trying too hard to be flippant to actually carry anything deeper. Thus, it can get exhausting at times. However, one should praise the simplistic animation style which is akin to ‘South Park‘.

The AV Club has aptly summed up the show, saying, “It’s a more character-driven than issue-driven show, and that works to its advantage. There’s genuine character development that cuts through all the over-the-top profanity of the first two episodes. Though blown into extreme proportions, the conflicts the boys deal with are grounded in reality, and there’s a sense that they’re actually learning from their experiences, which will be crucial as the show moves forward. Watching teen boys stomp through life without much regard for other people’s emotions—including each other’s—could easily become tiring.”

Legends of Chamberlain Heights Season 3 Release Date: When will it premiere?

‘Legends of Chamberlain Heights’ Season 2 premiered on June 18, 2017. Not long after the second season ended, Comedy Central announced the cancellation of the the show, which seemed to be the direct result of the negative criticism that the show had received. Josiah, the co-creator, inspiration, and voice-actor of the show released a statement about the cancelation, saying, “We love and appreciate everyone for the support. Keep being legends and be excellent to each other….”

Though, fans should not lose all their hopes. There’s still a slim possibility that some other network picks up the show and revives it. If that happens, we will update you about ‘Legends of Chamberlain Heights’ Season 3 release date.

While we wait for any positive news on ‘Legends of Chamberlain Heights’ Season 3, check out the season 1 trailer to refresh your memories. If you haven’t seen the show yet, head over to Comedy Central to catch all the episodes of the previous seasons.