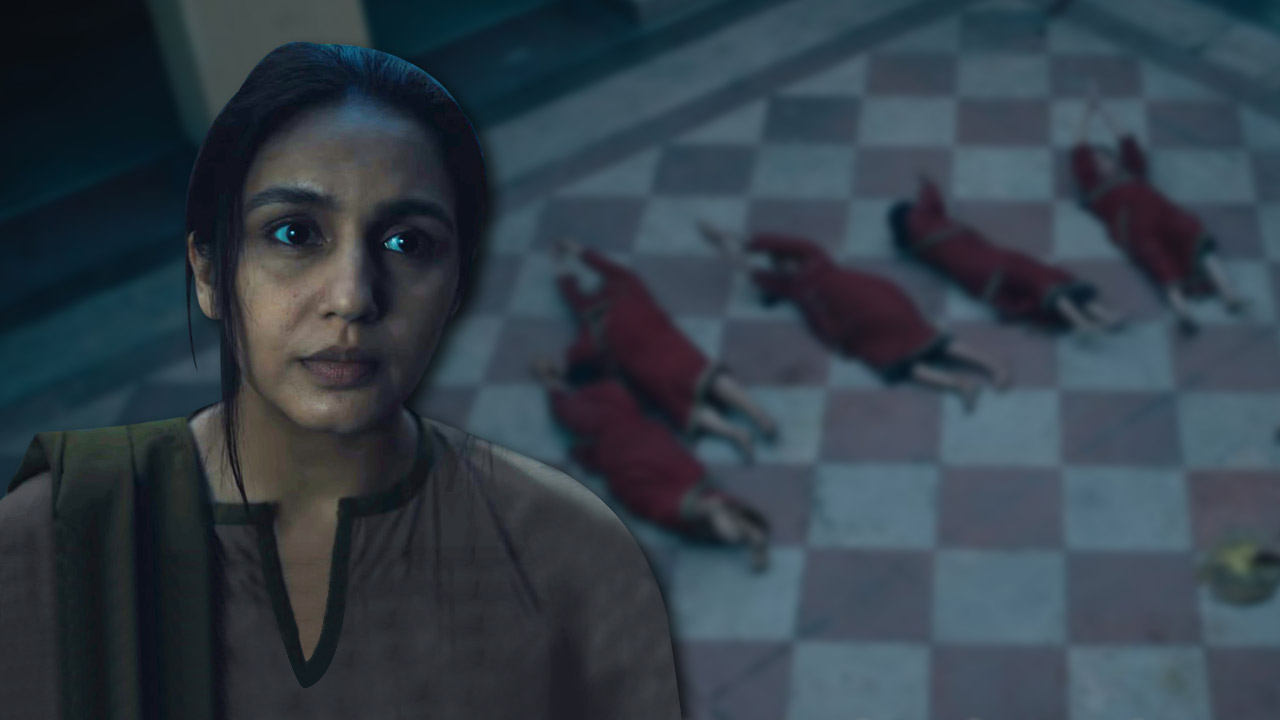 Stories that depict grim versions of the future where virus-infected zombies raise riots, genetically-altered plants create havoc, and humans fight for survival, are the new craze among viewers. Yes, dystopian dramas are the hottest genre in the world of entertainment. Add to this list Netflix’s post-apocalyptic series, ‘Leila’, an Indian TV show directed by Deepa Mehta, Shanker Raman, and Pawan Kumar. It is based on Prayaag Akbar’s eponymous novel and revolves around Shalini, who embarks on a mission to find her missing daughter. Written by Urmi Juvekar, the show is set in a totalitarian regime in the near future. Comprising six episodes, the show first premiered on June 14, 2019, on Netflix.

Leila Cast: Who is in it?

‘Leila’ stars Huma Qureshi, Siddharth, Rahul Khanna, Sanjay Suri, and Arif Zakaria in pivotal roles. Multiple Filmfare Award nominee Qureshi is noted for her roles in ‘Gangs of Wasseypur’, ‘Luv Shuv Tey Chicken Khurana’, ‘Ek Thi Daayan’, ‘Shorts’, ‘Badlapur’, and ‘X: Past Is Present’. Siddharth is best known for his performance in ‘Boys’, ‘Rang De Basanti,’ and ‘Bommarillu’. On the other hand, Khanna has appeared in critically acclaimed movies such as ‘1947 Earth’, ‘Wake up Sid’, ‘Elaan’, and ‘Raqeeb’. Actor and producer, Sanjay Suri first appeared in Bollywood movies with ‘Pyaar Mein Kabhi Kabhi’, and then starred in ‘I Am’ and ‘Jhankaar Beats’. Meanwhile, Zakaria has appeared in multiple films such as ‘Darmiyaan’, ‘1947 Earth’, and ‘Dance Like a Man’, to name a few.

Leila Plot: What is it about?

‘Leila’ is a six-episode miniseries that is an adaptation of a novel with the same name. Directed by the genius Deepa Mehta — who is well-known for her Elements trilogy, ‘Fire’, ‘Earth’, and ‘Water’ — it introduces us to Shalini who adopts the religion of her husband Riz, who is a Muslim man. They reside in a dystopic society, set in the future during the year 2040, where communities are divided into ghettos, based on caste, religion, and income. 16 years later, Shalini attempts to find her daughter Leila who had mysteriously vanished at the age of three. Meanwhile, Riz had also died, leaving Shalini to fend for herself.

‘Leila’ gives us a glimpse into an oppressive society ruled by politicians who have segregated the world into sectors separated from each other by sky-high walls. Within these boundaries of the city known as Aryavarta, reside the oppressed segments that are drowned in poverty, lack basic amenities, and struggle among themselves in a battle for survival. Shalini is the main protagonist, who is devastated after her daughter is snatched away from her. Not only this, but she is also separated from her family after she dared to marry someone from outside her religion. Following this, she is confined in a facility where she lives a difficult life with other women who have to face the same fate.

Although ‘Leila’ is basically a heartwarming story about a tragic mother-daughter relationship, it tries to reflect the worst tendencies of society which could become a reality if a dystopic world is to exist in the future. It presents us with a scary scenario when water scarcity and climate change have taken firm roots in the world. It portrays a broken-down society where people are left to survive on their own while fending for themselves. When asked about the theme, Mehta said, “What appealed to me about the project was the curiosity towards things I don’t know too much about.” She also added, “I think the world is changing radically into a totalitarian ethos and it’s curious to me how it’s happening so rapidly.” She cited examples of countries like Turkey, the US or Hungary, where things are taking a drastic turn. The question is, did the Liberal Left let people down? Or did it not care enough to understand their expectations?

Leila Season 2 Release Date: When will it premiere?

‘Leila’ season 1 premieres on Netflix on June 14, 2019. Considering its premise, which is about the existence of a devastating, ruthless society in our future, it is sure to turn quite some heads. So, what about a renewal? Well, we don’t have any official update on it yet and neither has Netflix come up with an announcement regarding the same.

Though considering extremely positive response from the critics and viewers, it looks likely that Netflix will green-light another season. If that happens, we can expect ‘Leila’ season 2 to premiere sometime in June 2020. However, this is only as per our best guess. We shall update this section with more solid news as and when we learn more.

While we wait for any positive news on ‘Leila’ season 2, check out the season 1 trailer to refresh your memories. If you haven’t seen the show yet, head over to Netflix to catch all the episodes of the previous season.