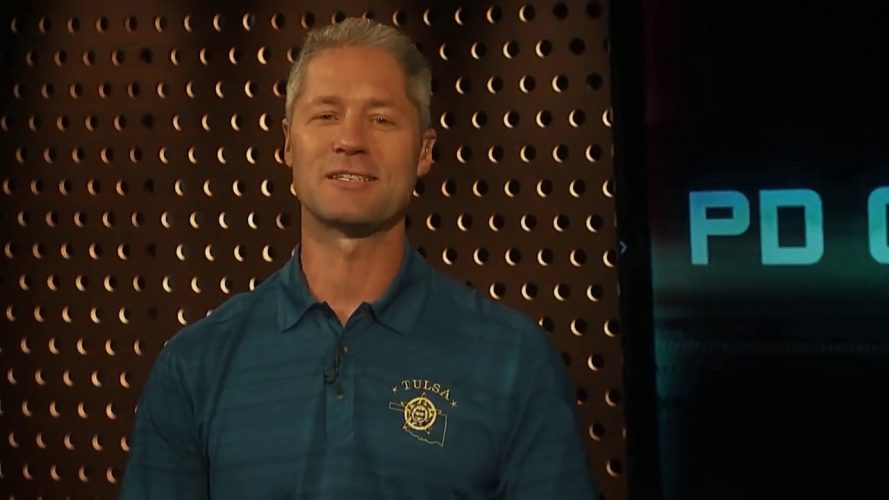 Live PD Presents: PD Cam deals with live commentary using body camera videos to provide viewers with an up-close experience of what the job of a law enforcement agent entails. The series offers fresh uncut scenes of the cases recorded via security/ surveillance cameras, helicopter footage, citizen reporters’ personal mobile phones and more. In its 30-minute episodes, the series features some rare and traumatic cases those in the police departments have to face on a regular basis.

The show first premiered on July 19, 2018 on A&E. This crime series is directed by Scott Preston and is executive produced by Dan Cesareo, Lucilla D’Agostino, Sean Gottlieb (A & E), Rick Hankey, Shelly Tatro and Pat Twist.

Live PD Presents: PD Cam Cast: Who is in it?

The series is led by Sgt. Sean `Sticks’ Larkin who belongs with the Tulsa Police Department Gang Unit. He is popularly called “Sticks” after his appearance in A&E reality show Live P.D. He has been serving as the Tulsa Police Department for nearly two decades. Besides, serving as a police officer, he has appeared as a guest analyst on the Studios of A&E network. Sticks spent his childhood in California. He has been divorced and has two kids named Nathan and Alyssa.

Sticks throughout the show shares his expertise and knowledge with his fans. From patrolling in the streets to working in the live studio, he is seen doing all sorts of work in Live PD Presents: PD Cam. He spots small things in cases which go unnoticed by the general public.

After appearing on Live PD Presents: PD Cam, he decided to create a twitter account, and today he has more than 100000 followers on Twitter. Live PD has helped him to connect across the country with his officers and his fans. Before appearing in this show, he never cared about social media. He likes to keep his private life to himself. “I’m having a great time,” Sticks said in an interview. “I don’t know if it’s going to be over in two months from now, or it’s going to go on for five years or 10 years, (but) I am enjoying it. I’m grateful for it.”

Live PD Presents: PD Cam Plot: What is it about?

Live PD Presents: PD Cam follows Sgt Sean “Sticks” Larkin as he helps viewers to look at what a police officers have to go through in their job from his point of view. In each episode, the police department has to deal with standoffs, the craziest chases as well as interactions across the country which are shown without fabricating the cases. If you dislike watching annoying commentaries by reporters, then you can watch the raw version of the episode online.

The main motive of the show is to offer raw and original news which will then maintain transparency with viewers. They also present mind-boggling content like never seen before. “I think you’re going to have people sitting on the edge of their seat,” Larkin said on the show. “There’s going to be some (segments) that you just go, ‘Holy cow,’ with some of the stuff officers face out there. … Then there are (segments) that are just funny deals that are very light-hearted, so it’s a good balance.”

“The goal is to show policing across America,” Sticks said. “You see small agencies, large agencies, you see urban (departments), you see sheriff’s departments and municipalities, highway patrol,” he said. “Here’s an unbiased look, an unfiltered look at law enforcement across the country.”

Amongst the cases recorded, one dealt with the police trying to find a suspect who shot a police officer four times and ran away, stealing a police car. Further, in the series, the police attempt to seize a person in a high-speed chase in the streets of Baltimore. In another case, the police department receives a complaint about a man threatening people on the highway with his knife. They try to calm the situation when a criminal fires shots which could kill his hostage. One police officer accidentally comes in contact with meth.

In another episode, a woman caught by the police tries to get partially nude to run away from DUI. Another police officer gets assaulted by a wasted man. One other fight takes a brutal turn and wrecks disturbance in the waiting room of the hospital. Live shots are fired on the streets of San Francisco between the police and a criminal. All of this and more is recorded closely and delivered to the audience. A lot more action is expected to unfold in season 2.

Live PD Presents: PD Cam received a lot of praise from audiences for its honest portrayal of the life of patrol officers. If you haven’t seen it yet then check it out and decide for yourself whether it deserves a season 2. As of date, the second season hasn’t been renewed, and thus, the air dates are unknown. We believe season 2 of Live PD Presents: PD Cam can release sometime in December 2020.

Here’s the first episode of Live PD Presents: PD Cam that will you a glimpse into what the show is about.