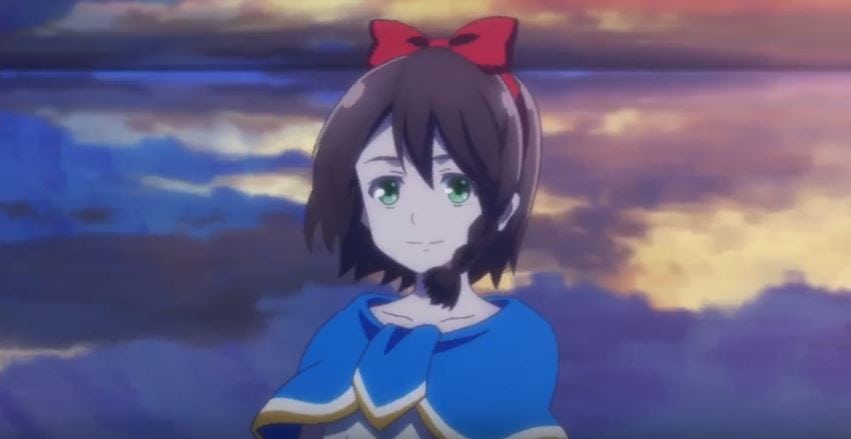 ‘Lost Song’ is by no means a revolutionary anime and there is nothing extremely refreshing about it. But it sure is enjoyable and is also unique in its own way. It is in fact surprising how it surpasses all your expectations from it. When I first started watching it, I was just expecting to be another one of those standard fantasy anime that don’t really have any distinctive interesting gimmicks. But the unpredictability of its storyline kept me at the edge of my seat till the end. Almost every new plot point of the story had a new surprise to it and none of it was random in any way. Despite having only 12 episodes, the show has a very smooth pace that allows it to subtly transition from one plot twist to another. It’s this unpredictability of the anime that makes it stand out from all the others.

Apart from all of its “surprise elements”, the animation quality is just amazing and even the art style fits right in with the themes of the show. Being a music-centric anime, it comes as no surprise that almost all the original soundtracks involved in the anime are remarkable and stay with you long after you’re done watching it. Overall, ‘Lost Song’ is one show that certainly deserves a shot and I’m pretty sure that it will not disappoint most viewers out there. Hopefully, the show will eventually gain enough popularity to qualify for a new season or at least a spin-off. Speaking of which, to know more the possibilities of getting a new season of this wonderful anime, jump to the next section.

Lost Song Season 2 Release Date: When will it premiere?

‘Lost Song’ season 1 premiered on April 8, 2018 and with a total of 12 episodes, it ended on June 16, 2018. While Japanese audience has a six months head start on the show, Netflix started streaming episodes of the first season internationally on a weekly basis from October 5, 2018 onwards. When it comes to the renewal of the series, Netflix hasn’t officially commented on it, but the creators have been teasing its release by posting pictures on social media with captions that hint towards its renewal.

There was also a commercial after its rebroadcast which suggested that the anime will be getting a “new project”. So by now, there’s no doubt that the creators have already started working on its new season and all of this is enough of an indication that the show is not over yet. We can expect ‘Lost Song’ season 2 to release sometime in 2020 if everything goes well. As soon as we get any updates regarding this, we’ll update here in this section. Till then, you should definitely check out other similar fantasy anime shows.

The English Dub of ‘Lost Song’ is available on Netflix.

Lost Song Plot: What is it about?

Last Song revolves around an energetic girl named Rin who lives with her elder sister Mel, younger brother Al and grandfather Talgia Hokle in a Dandera village. She wishes to go and perform at Royal Orchestra with her brother someday. With her singing abilities, she possesses the power to heal wounds, create water and even stir the wind. One day, a royal soldier notices her supernatural singing abilities and reports it to General Bazra. Threatened by her, the general burns down the entire village and when Rin tries to reach out for her cousins to save them, she finds them dead.

Meanwhile, the capital is on the verge of war where another mysterious girl named Finis possesses similar powers and is given a task to heal the soldiers with her songs. While wandering the forest, she meets Henry and informs him that she can only sing one song before she dies. This is when the two parallel stories converge and  Pony, Rin, Allu, Monica and Al arrive at Dr. Weisen’s cottage. Dr. Weisen notices that unlike Finis, Rin can sing as much as she wants without losing her powers. What follows is the story of two magical girls who realize that their lives are linked to each other’s in more than one ways and it’s on them to eventually figure out where this musical journey will take them. Will their last song bring peace to their world that is slowly crumbling or will it bring in dark clouds of sorrow and despair?

Finis is one of the main protagonists of the series who is known for her supernatural singing abilities. She later falls in love with Henry who seems to be around her all the time. During one incident, with the intention of saving Henry’s life, she actually sets him on fire through one of her songs and ends up killing him. Grieving over this loss, she sang “The Song of Mortality” to completely destroy the planet but instead, this makes her immortal. She is then forced to experience the end of civilization and then the beginning all over again; all of it in an endless loop. In this loop, she ends up meeting Henry many more times but realizes that the only Henry she loved was the one she had met for the first time. Her only hope is that someday she will end up being in her “original” timeline which will finally end all of her sufferings.

Rin is a young energetic girl who loves to sing and possesses the power of healing wounds through her voice. She lives in a small village with her Grandfather, younger brother and elder sister. Unlike Finis, her songs have a positive impact on her instead of draining away her own lifespan. After her siblings are killed, she promises to herself that she’ll sing at the Royal Orchestra to save as many lives as she can. She is a part of Finis’s “last bit of hope” and comes into existence after Finis sings her Song of Destruction. She later sings the Song of the Beginning to save the world and Finis from another reset.