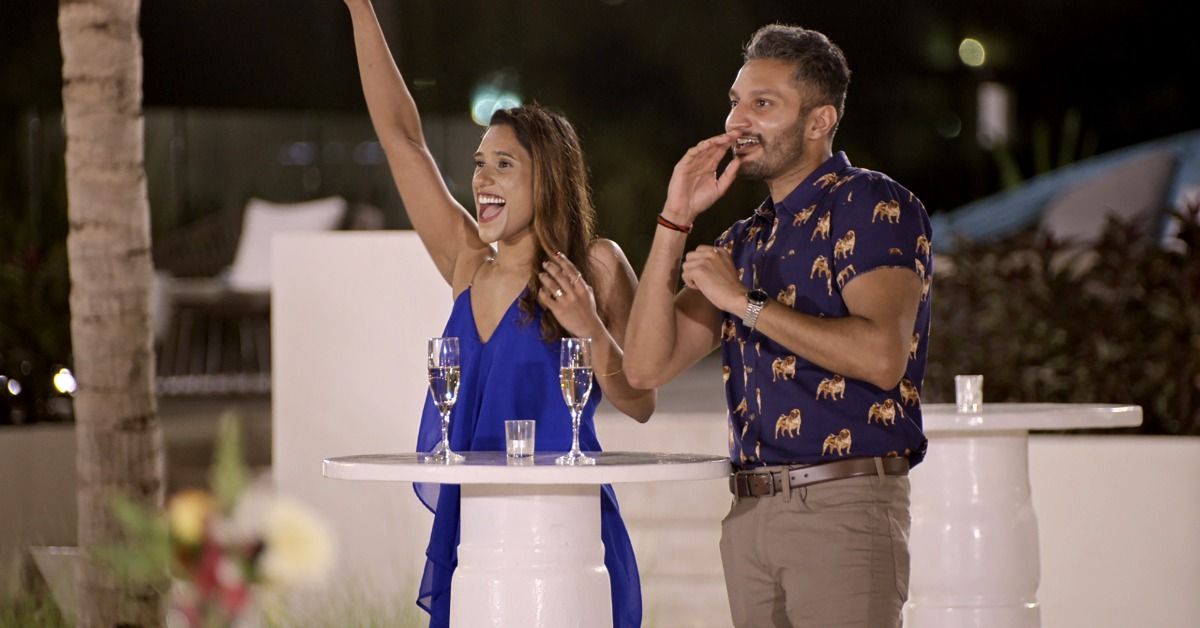 Tackling the notion of whether emotional connections can really conquer physical attraction or not, Netflix’s ‘Love is Blind‘ is a reality dating series unlike any other. It revolves around a group of hopeful singles as they try to fall in love sight unseen, only to face the real-world challenges that any ordinary couple must endure to have a healthy relationship. So now that the second installment of this production has landed, proving to be as big a hit as the debut one, let’s find out all there is to know about the scope of season 3, shall we?

‘Love is Blind’ season 2 premiered on Netflix on February 11, 2022 — after an excruciating two-year wait owing to the coronavirus pandemic causing delays in filming. This installment actually followed the successful launch pattern of the first season by airing its ten episodes – with a run time of 46-76 minutes each – over three weeks. The first five aired together on the date mentioned above, whereas the following four dropped at once on February 18, leaving episode 10 to conclude the heartwarming extravaganza on February 25, 2022.

Netflix had renewed this series for both the second and third installments on March 24, 2020 – not long after the first one debuted on February 13 – meaning that ‘Love is Blind’ season 3 is definitely on the cards. In fact, as per host Vanessa Lachey and creator Chris Coelen, this forthcoming edition has not just been cast, but it has already been filmed. “So we shot season two, that’s gonna come out February 2022, and I don’t know am I allowed to say? We shot season three already,” the former told ET back in the fall of 2021.

Series creator Chris reiterated this statement while speaking to Metro UK in mid-February 2022 and revealing, “Yes, we’ve already filmed season 3.” He also added that “every season is totally unique. Season three is a very different being than either season one or season two,” but he didn’t elaborate on how. Therefore, although a release date for the same has not yet been announced, considering the premiere dates of its previous installments, we can expect ‘Love is Blind’ season 3 to arrive on our screens in or around February 2023.

Love is Blind Season 3 Cast: Who is in it?

Taking the details mentioned above into account, it’s clear that returning to serve as hosts for ‘Love is Blind’ season 3 are none other than happily married couple Nick and Vanessa Lachey. Coming to the contestants, we don’t know who they are or which city they’re from as of writing, and we’ll likely only be able to gather this information in the weeks prior to season 3’s launch. After all, Netflix didn’t unveil a single thing about the season 2 singles from Chicago, Illinois, until almost two weeks before its premiere date in early 2022.

With that said, we should mention that Chris Coelen wants “people who aren’t just doing it for the attention. There’s certainly plenty of places for people who want to do stuff for the attention. We [want] to be really dealing with people who were genuinely interested in it.” In a recent interview, he further addressed the casting by stating, “Both Season 1 and Season 2, we really tried to have a diverse pool of participants… — whether it’s experience or body type or ethnicity or whatever. [But] There’s only so many people that we showed.”

Love is Blind Season 3: What is it About?

‘Love is Blind’ season 3 is bound to follow the almost flawless format of the previous installments, meaning that it will revolve around a bunch of marriage-ready singles as they meet, mingle, and maybe even get engaged through a wall. The contestants will get about two weeks to get to know each other through these “pods” before making their decision concerning possible suitors, following which the paired ones will leave for a romantic vacation.

That’s where they’ll first get to explore not only the reality of their emotional connections but also their physical compatibility, a process that will continue once they return to live together for around a month more. Only then will the couples, at least those who manage to stick together thus far, walk down the aisle in front of friends, family, and the entire world, to answer the age-old question of if love truly is blind.

Read More: How to Join the Cast of Love is Blind?