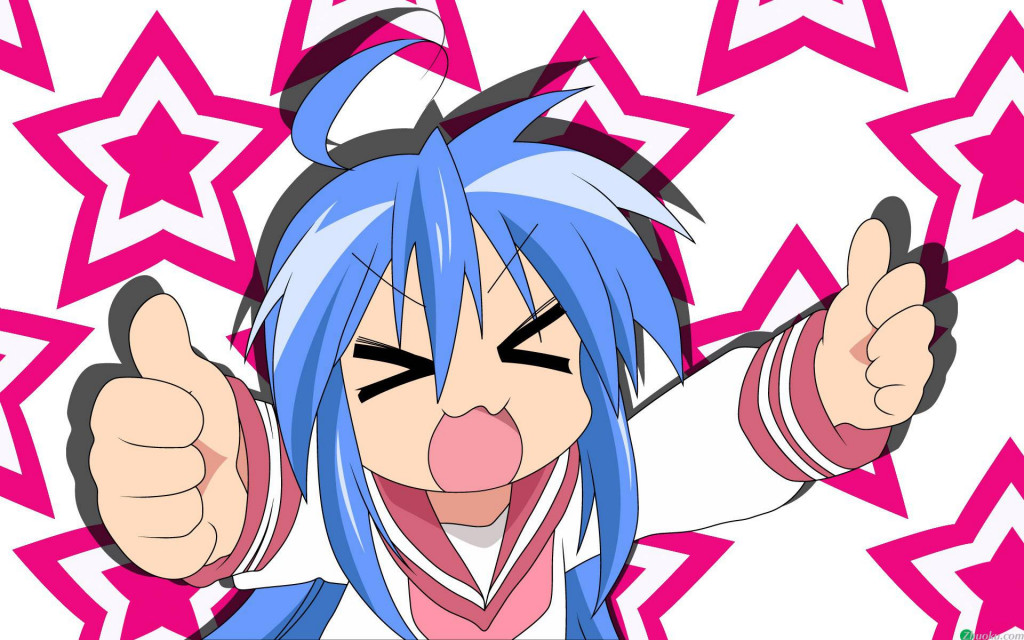 ‘Lucky Star’ is a Japanese romantic four-panel comic strip manga series written and illustrated by Kagami Yoshimizu. It began serialization in December 2003 on ‘Comptiq’, a popular magazine by Kudokawa Shoten but was also featured in several other notable magazines such as ‘Shōnen Ace’ and ‘Comp Ace’ as cameos. A total of 10 tankōbon volumes have been published till date with the latest one being published in October, 2013.

Bandai Namco initially licensed and released the manga in North America in 2009 but it is presently licensed by Viz Media since Bandai Namco got shut down. Several spin-offs have been released for the same following the popularity of the series, including additional media such as video games and Drama CDs. It has also been adapted into an anime by Kyoto Animation, who first started airing the series on 8th April, 2007. Despite several issues with the production, which led to the initial director Yutaka Yamamoto being fired from his position and replaced by Yasuhiro Takemoto, it still did quite well in terms of viewership and reviews.

Lucky Star Season 2 Release Date: When will it premiere?

Lucky Star season 1 premiered on Apr 8, 2007 and ended its 24 episode run on Sep 17, 2007. As far as the next season is concerned, it is extremely hard to figure out the production cycle of this anime given that the series has always been the center point of scandals and production problems. As stated earlier, the initial director was deemed ‘incompetent’ to direct the anime by Kyoto Animation, which led to them replacing him just after the successful production of 4 episodes. It is important to note that Yutaka Yamamoto is quite a revered director in Japan and is highly experienced in the field as well. However, perhaps this series was not one of his best efforts and since then, he has moved on to other projects, mainly with A-1 Pictures and Ordet. It does not stop here though!

A couple of years after the release of the anime, the voice actor for Konata Izumi, Ryō Hirohashi, managed to land herself in trouble which resulted in her being booted out from the anime industry. You see, voice actors in Japan, also known as ‘seiyuus’, have to maintain a strict code of conduct which is heavily monitored by their respective agencies. One of these rules states that they are not allowed to engage in any type of romantic relationships, whatsoever. There are several reasons behind this, one of them being to retain and sustain the ‘enigma’ of the actor while others are simply due to Japanese culture.

Several fans have extensive fantasies regarding their favorite characters and their voice actors, and if they find out that they are actually romantically involved with someone else, their immersive bubble bursts leading to them unfollowing the voice actor. Therefore, agencies have strict codes regarding this matter and Ryō Hirohashi unfortunately got caught and was fired. This has major implications on the production of a second series of the anime. Companies are very strict about retaining the original cast members from several projects even if they have been directed and produced by a different company. This is done to produce the most authentic experience possible for fans for the series which, considering the massive Japanese fanbase, is quite necessary.

Therefore, it is highly unlikely that a direct sequel to the anime will be produced. In addition to this, almost six years have passed now without any word about development from the developers, so it can be safely added to the ever-growing list of anime stuck in the production limbo. To be honest, at this point Lucky Star season 2 release date of 2021 or 2022 seems like a distant dream.

The English dub for the anime is presently licensed by Viz Media following the shutdown of Bandai Namco Entertainment. It is pretty consistent with its original Japanese counterpart and can be streamed online on Crunchyroll and Funimation.

There is no overall plot to the anime given that it is a slice-of-life but there is a general story arc with individual episodes focusing on the challenges faced by a group of students on a daily basis. It is very episodic in nature with each episode concluding the problem it portrays. This does not mean there are no character developments though. In fact, there is a lot of character development involved given its episodic nature. There is a slight variation between the original manga and the anime: the manga follows the group as they start out high school together in their first year while the anime directly picks up from the second year of high school. This, however, does not have many implications in the storyline, as the group progresses through their usual activities from the second year.

However, if one wants to figure out the events that took place during the first year, then they will have to refer to the original source content. The anime begins with introducing the four main characters, namely Konata Izumi, Kagami Hiiragi, Tsukasa Hiiragi, and Miyuki Takara. Konata is often regarded as the main character of the series but the four of them share equals amounts of screentime, at least for the most part of the anime. It goes on to show the various interactions between these characters and how they interact with one another often leading to hilarious consequences.

Konata Izumi: Voiced originally by Ryō Hirohashi in the Japanese version by Aya Hirano in games and by Wendee Lee in the English rendition, Konata Izumi is one of the most influential characters of the series. She is extremely popular in Japan as well given that she displays most of the characteristics portrayed by a typical high school girl such as procrastinating and playing video games. This also makes her an extremely likable character as well and definitely the most relatable of the lot. She is extremely outgoing, friendly and loving and can sometimes be mischievous but never at the cost of others. She is extremely intelligent as well, proven by the fact that she gets by her high school with pretty commendable grades despite not even touching her books.

Kagami Hiiragi: The older fraternal twin sister of Tsukasa Hiiragi and a close friend of Konata, Kagami is an extremely hardworking girl and this reflects on her grades in school when she tops at all the subjects she opts for. As a result, she is made the class president in her first year in high school. She is extremely well mannered as well, mostly sticking to her books, whether it be a manga or her own textbooks. She is tom-boyish in nature but also displays several qualities of a teenage girl such as being conscious about her figure and weight to the point that she meticulously calculates and tracks changes in her body-weight right down to the kilogram. Konata has a habit of irritating her and poking her and the fights that ensue between the two are some of the most hilarious sequences of the entire anime.

Tsukasa Hiiragi: Younger twin sister of Kagami, Tsukasa studies in the same class as Konata and is an excellent cook. Tsukasa also has a habit of procrastinating and eventually ends up with her sister along with Konata to hastily complete their homework. She shares a lot of traits with Konata which leads to her referring to them as ‘birds of a feather’. However, one trait she does not share with Konata is her interest in video games and anime. Tsukasa in not much into the entire otaku and eroge thing and mostly stays away from them, but she does have an interest in the ‘Sgt. Frog’ series.

Miyuki Takara: The fourth member of the group and also studying in the same class as Tsukasa and Konata, Miyuki is a soft-spoken, well-mannered, intelligent and studious girl who belongs to a rich and wealthy family. Acting as the role model among the group, she is often the target of Konata’s light verbal sexual harassment, which she takes very sportingly. Miyuki can be seen giving random help to her classmates who are struggling with their subjects, but often explains it in a complicated, lengthy manner.