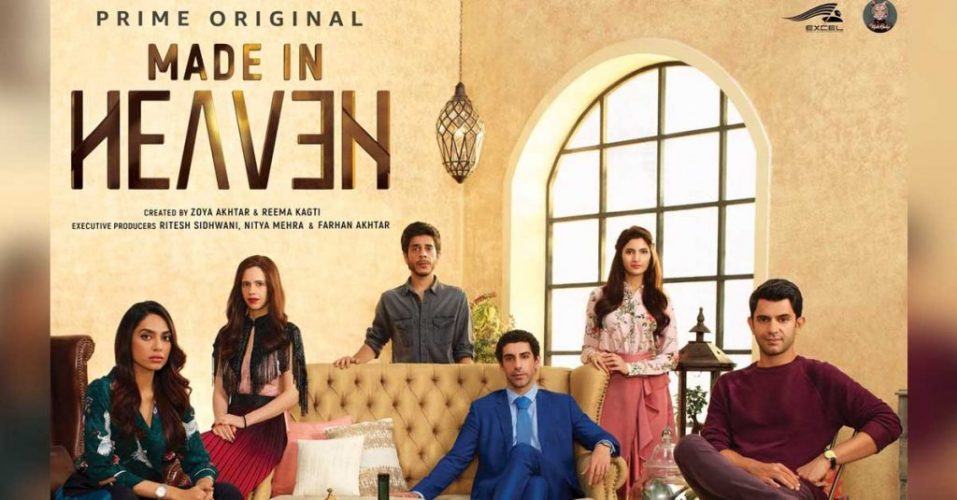 ‘Made in Heaven’ is the fourth Indian fictional Amazon Prime series and a collaboration between writers Zoya Akhtar and Reema Kagti, who are known for being the force behind successful movies like Zindagi Na Melegi Dobara and Gully Boy. ‘Made in Heaven’ is about two wedding planners who plan and organize the big, fat weddings India is famous for. The series is written by Akhtar herself, Reema Kagti, Niranjan Iyengar, Alankrita Shrivastava, and Vivek Anchalia, while the story is by Anchalia himself. Along with Akhtar, Nitya Mehra, Prashant Nair, and Shrivastava are the other directors of the series.

The two wedding planners who are the lead characters of the story are Taran and Kara, and they organize lavish affairs to make weddings look like fairytales. The name of the show, ‘Made in Heaven’ is actually the name of their company. They smoothly blend in traditional concepts with modern aesthetics to please their clients. But there will always be disagreements when the old and the new meet, and that is what the series seems is about. With the backdrop of Indian weddings, this series takes on modern problems faced by the new-age Indians, who are trying to reconcile the outlook and beliefs of their families which are seeped in tradition.

Made in Heaven Cast: Who’s in it?

The show’s two lead characters are played by Arjun Mathur and Sobhita Dhulipala. Dhulipala had made her debut in the critically acclaimed movie ‘Raman Raghav 2.0’ by Anurag Kashyap, which was screened at the Director’s Fortnight at the Cannes Film Festival. Mathur, on the other hand, has a vast experience, having earlier worked as an assistant director in some big Bollywood projects. Interestingly, he was also the lead actor in Zoya Akhtar’s directorial debut ‘Luck By Chance’ (2009). Mathur recently played the role of politician Rahul Gandhi in the controversial movie ‘The Accidental Prime Minister’ (2019). Eminent actress Kalki Koechlin is also a part of the cast. She has acted in several critically acclaimed films throughout her career, even earning praise from Roger Ebert for her performance in ‘That Girl in Yellow Boots’ (2011). Another powerful theatre and film actor, Jim Sarbh, is a part of the cast as well, along with Shashank Arora, Shivani Raghuvanshi, Ankur Raathe, Shweta Tripathi, and Monty Singh.

The series is produced by Excel Entertainment, who are known for shows ‘Inside Edge‘ (2017) and Mirzapur (2018), also streaming on Amazon Prime. Akhtar, who started her career with movies, said “It (web series) is a different format, long format. For filmmakers and writers like us who usually have to end a story in 2 hours, this is an opportunity to tell a story in a long format. It’s filmmaking at the end of the day. It’s just a different format and therefore we are happy to experiment with it”.

Made in Heaven Plot: What is it about?

Made in Heaven’s plot is set in the backdrop of a lavish Indian wedding. The wedding ceremonies are deeply rooted in Indian cultural and religious traditions. But those who are being married cannot seem to connect with all the rituals that are happening every single day. They are a modern couple who have seen the world around. The lead characters of the story are the wedding planners who arrange the entire shenanigan. They seek out the venue of the wedding, make arrangements for decorations, catering, and others.

However, under this lavish gala lies deep, dark secrets of each man and woman. Is all the lavishness a layer under which they are trying to hide their truer selves? Are Taran and Kara, the sellers of such dreams, happy themselves? How much meaning do traditional values hold in a world which is slowly being consumed by the consumerism? These are the questions one can ask while watching this show. Akhtar has always tried to focus on modern Indian problems in her movies, and this seems to address the same.

In a statement they released regarding the series, Akhtar and Kagti said, “Creating Made in Heaven has been a labor of love. Our objective with this project was to tell a story that was inherently entertaining but strong and deeply rooted in our society. Grand Indian weddings acted as just the right backdrop to examine the liberal fabric of educated, modern Indians and their dichotomous value systems that co-exist peacefully at times and at other times come into conflict.”

Amazon Prime India’s content head Vijay Subramaniam also seems optimistic about the series, saying that “Made In Heaven brings to Indian customers a show with a fresh storyline, incredible talent and a layered narrative that will draw the viewer in”.

Made in Heaven Season 2 Release Date: When will it premiere?

Made in Heaven season 1 premiered on March 8 on Amazon Prime Video. While the series failed to garner the interest Mirzapur had managed, it did receive favorable reviews. Both Zoya Akhtar and Reema Kagti have always managed to produce quality content in whatever they have done. It will be interesting to see whether Amazon renews the show or not. Zoya might prefer films over a tv series. And that could mean end of Made in Heaven. But never say never in the world of television. If anything changes and the show is renewed, we will update this section with Made in Heaven season 2 release date.

Made in Heaven Trailer:

While we wait for an update on Made in Heaven season 2, check out the season 1 trailer to refresh your memories. If you haven’t seen the show yet head over to Amazon Prime to catch all the episodes of the previous season.