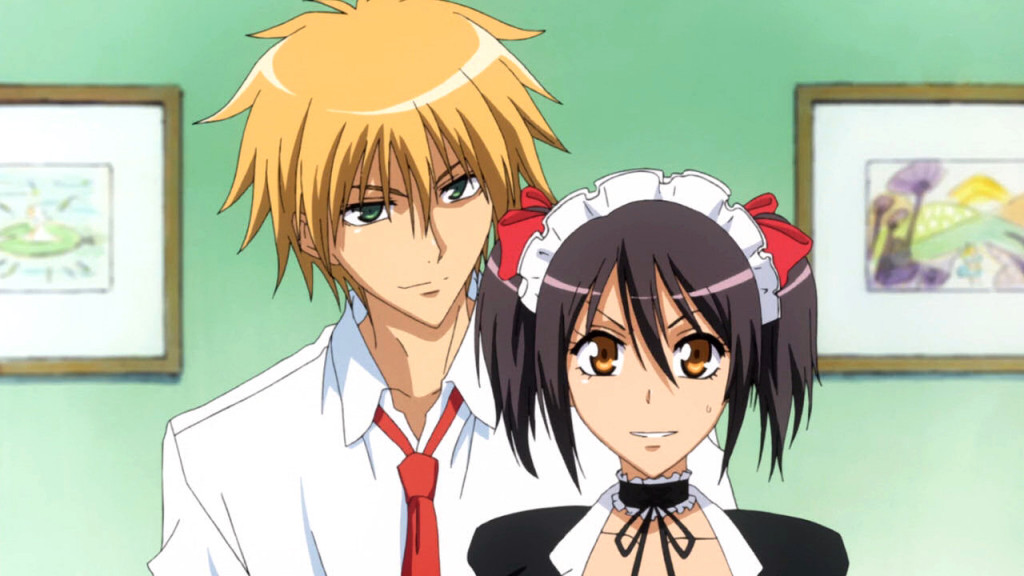 There’s a common assumption that ‘Maid Sama!’ is just another typical rom-com anime. But only when you jump right into it, you realize that there’s a lot more to it than just bland romance and comedy. There are many romance anime out there and out of these, ‘Toradora’, ‘Inuyasha’ and ‘Say “I Love You” are a few popular names. But every time you go through a list of romance anime, one name just has to be there somewhere on top and that is ‘Maid Sama’.

Unlike most other anime of this genre, ‘Maid Sama’ does not completely rely on fan-service for its comedy. In fact, you’ll rarely find anything in the entire show that even mildly qualifies as fan service. Even the main character is not portrayed as this extremely curvy girl; she’s just how a normal high-school teen would be. The realism in the anime is particularly striking. Despite knowing the fact that it’s just an animated show, you’ll still adore the relationship of the main characters because it simply is the cutest thing ever.

The comedy is not the laugh-out-loud kind. It’s more subtle and will make you giggle all the time. The original story of the anime is extremely refreshing and the way it portrays the love between the two main characters is so beautifully subtle without the implication of any physical interactions between them. The anime takes a very clean, precise and straightforward approach to the story.

The first season of ‘Maid Sama’ came out almost a decade ago, which kind of reduces the possibility of a new season. But then again, there are many other anime shows that have had their new seasons coming out after more than 10 years. One big issue that ‘Maid Sama’ faces is that the “maid cafe” theme of the show gained a lot of criticism initially and was accused of being sexist. It also did lose a lot of fans during this period and its popularity then soon just came down to a few selected Otakus. These are some of the negatives that bother us. But it’s still good to be hopeful about the show and if there are any updates regarding this, we will surely be the first ones to inform you. Till then, getting back to the manga is always a great option.

Maid Sama Season 2 Release Date: When will it premiere?

‘Maid Sama’ season 1 premiered on April 2, 2010, and ended the same year on September 24. It had a total of 26 episodes, which is slightly above the conventional 24 episode format. Fans literally did everything in their power to get a second season from J.C. Staff studio. Some even started online petitions just to get one more season out of this great anime. But sadly, there have been no announcements regarding that yet and every passing year after the first season’s end just brings us closer to accepting the anime’s fate.

Let’s just learn to embrace the fact that certain anime are better off with just one season. There are also a few other anime that are very similar to ‘Maid Sama’ and can fill that gap inside your heart; just refer to the list here to know more. As soon as we come to know about ‘Maid Sama’ season 2 release date, which according to most optimistic estimates could be in 2021, we will update this section.

The English dubbed and subbed version of the first season of ‘Maid Sama!’ can be found on Hulu. You can also stream it on Amazon Prime with its original Japanese audio and English subtitles.

The plot centers around Ayuzawa Misaki, who is a senior at the Seiki High, a boys school that only recently opened its gates to female students. The boys of the school have quite a delinquent image about them and are known for attracting trouble. Misaki is appointed as the first female president of the student council and she takes it upon herself to bring some discipline to the school so that she can improve its current unruly reputation.

Misaki’s methods of reforming the place are rather strict and ruthless and the boys often refer to her as the “Demon President” of the school. Her fellow female students look up to her as a role model and for the school staff, she is a shining beacon of hope. She has the reputation of being this tough and intelligent dictator of her school but outside her life, she is completely the opposite. She works as a part-time maid at a cafe known as Maid Latte to help her single mother. But she’s afraid that if anyone finds out about this secret life of hers, then her highly esteemed reputation at school will be ruined.

Things take a shocking turn when one day, she bumps into Usui Takumi right outside the Maid Cafe while she’s still wearing her maid uniform. Her life starts to crumble right there because she’s sure that Takumi being the most popular kid in school will surely let her secret out. But to her surprise, he keeps it to himself. What comes off as even more surprising is the fact that later he tries to use this as an excuse to get close to Misaki.

Now, Takumi has always been the kind of guy who previously never really showed any interest in girls but he sees something in Misaki that just instantly draws him towards her. But for Misaki, all of this just puts her off her stride, further complicating her situation. It’s pretty obvious what happens next but for the sake of not spoiling it for the ones who have not seen it, we’ll just leave it here. The first season ended on a pretty conclusive note and did not really give out any hints for the second one. So even if a new season of this show comes out, it’ll probably be a new story with the same characters in it. 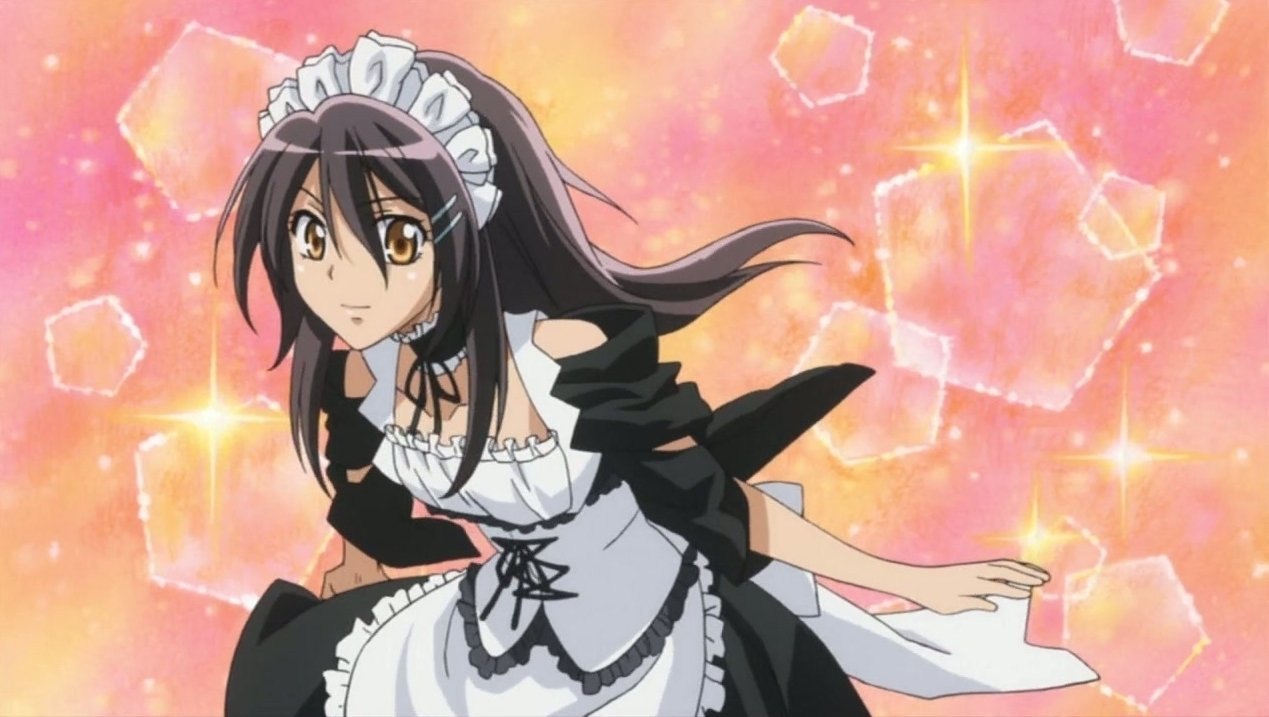 Misaki despises men because earlier during her childhood, her father had abandoned her, her little sister and her mom. He left them with a huge debt that they still struggle to pay. That is one big reason why Misaki decides to take up the Maid job. Misaki also knows the Japanese self-defense art form of Aikido and it reflects on her tough and badass image as the student council president.

In spite of being a very bright student, Misaki still has to go to an inexpensive school that consists of only 20% of girls. Her financial condition does not allow her to choose a better school but she proves that her conditions will not bring her down and shines even in a place where everyone is determined to dampen her spirits. She maintains a tough exterior throughout the time that she spends in her school but when she works at the cafe, she lets her guard down. She treats people with utmost care and consideration and makes sure that she is able to help everyone. Takumi being the only one familiar with this side of hers, mocks her for being so polite outside school. This one thing about Takumi triggers her every time and it often brings back her not-so-polite side. 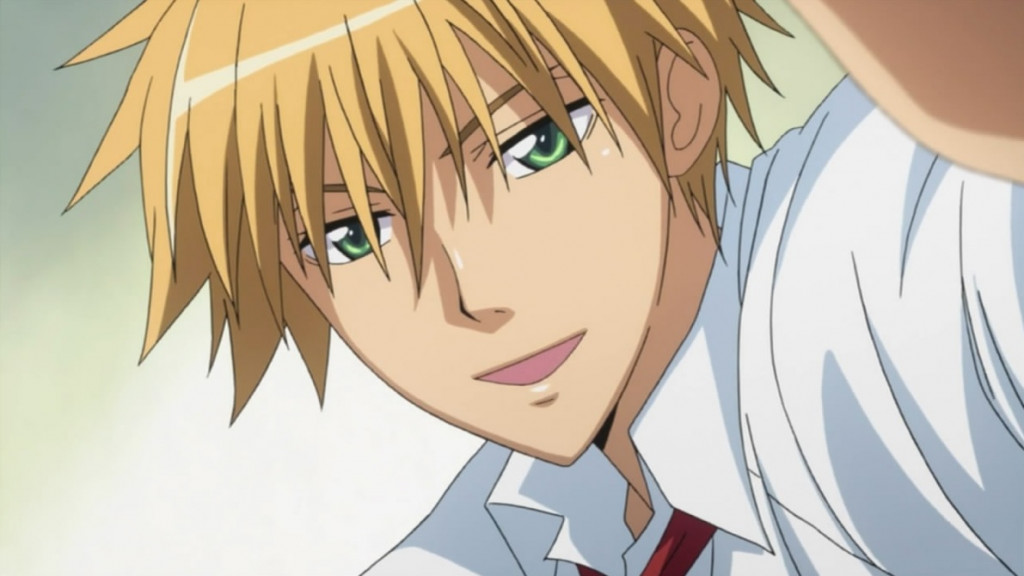 Takumi Usui is a tall good-looking young boy who is good at pretty much everything and that’s probably the reason why he’s so popular in his school. Despite his talent in so many areas, he never really takes a deep interest in any single thing and just likes to be an observer most of the time. The only thing or person he takes a deep interest in is Misaki and after he runs into her outside the Maid Cafe, he falls in love with her. Misaki often dismisses his feelings towards her as harassment and teasing and even calls him a “perverted outer-space alien”. But he stays unaffected by all of this and a lot of times, he even goes out of his way to protect her. He even offers her useful advice on how she can deal with the boys of the school in a better way and when Misaki actually applies these tactics, she notices that they work out really well.

Takumi is the only boy in the school who manages to earn a little bit of Misaki’s respect. He never really reveals much about his past and keeps most of it a secret. The only thing that is known about him is that he has an older brother who lives all alone in an apartment somewhere.