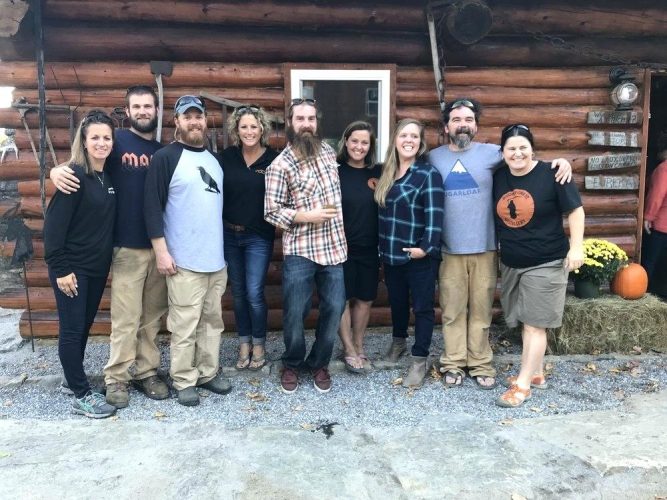 Maine Cabin Masters revolves around the professional life of a Maine contractor who takes wrecked, dilapidated cabins and gives them new life. At the heart of the series is Chase Morrill, as himself and the creator of this DIY show, who is a skilful Maine homebuilder. The pilot episode of the series aired on February 23, 2016, and the first season began airing from January 9, 2017, in the USA. This entertaining and imaginative TV show is broadcasted on DIY Network.

The cast of Maine Cabin Masters includes Chase Morrill, Ashley Morrill, Ryan Eldridge, Matt Dix (also known as Dixie), Jared Baker (nicknamed as Jedi), who are the crew members and the main homebuilders appearing in the series. Ryan is Chase’s brother in law, and Ashley is his sister.

“To me, the best part of the show is the way the production company depict the state of Maine, and we work in some of the most beautiful parts of the state.” Jedi Baker said in an interview. Chase Morrill points out that the whole crew is skilled and passionate in their own ways. Morrill’s sister works on most of the designs. Ashley says, “I can see why people like it because I like it.”

Maine Cabin Masters Plot: What is it about?

The series ‘Maine Cabin Masters’ is basically about a bunch of Homebuilders who strive to bring life to wrecked buildings. Morril’s foray into the renovation and homebuilding business happened in the most unusual manner and dates back to a time when he was fixing an electric water heater at his home in the crawlspace in Carrabassett Valley in 2015. Little did he know that he would become a reality TV star one day. He recalls the distinct house that was given the name, The Bucking A by the two brothers who built it in the ’70s, whose slim A structure kept tumbling over every time wind gushed through it. “There’s the clean version of the story, which is that every time the brothers would get some of the ‘A’s to stand up they’d buck in the wind and fall over,” he says, “And there’s the other version, which is that the framing was just such a bucking pain in the butt to work with.” He then went on to renovate it and thus began his stint on DIY.

“The cabins are so important to the families who call us for help,” says Morrill, “We breathe new life into theses cherished retreats, so their owners can continue making memories with loved ones for decades to come.”

The first season featured 11 episodes. It begins with the Maine family working together to save Daggett Camp, a historic place once bought by a politician in 1930s. They register a joyous victory, and the season progresses as the Maine family save many buildings including a dilapidated island cabin, an off-the-grid camp, a dysfunctional cabin in Belgrade Lakes, a dilapidated family camp, a cabin for a bride, an island cabin of 130 years old, an off-the-grid hunting cabin, A-frame cabins, and many other buildings. It is noted that often the task at hand is life-threatening. Morrill said, “Deadlines and the level of completion when we had to take the camps to was extremely challenging and almost killed us.”

The second season premiered November 27, 2017. It has 16 episodes, and each episode brings out a new level of perfection and more creativity from Chase’s whole crew. They also highlight teamwork. The second season continues with a few more unique projects, letting them embark on an adventurous journey, excelling with every building they put their hands on.

Season three begins with an exciting project for Chase Morrill and Ryan, his brother-in-law. Allagash Brewing Company’s offer to renovate the brewery, as they both love beer. They become successful in remaking the building, by using custom pieces and items from a brewery, which was beyond the wildest expectations of the clients. They also get a chance to build a pet sanctuary for animal lovers. They are seen pushing their boundaries of perfection in all episodes. In another episode of the third season, they satisfactorily build Belle’s Island Camp for a couple, having a long generational history.

In each episode, Chase Morrill and his whole crew prove that no building project is tough enough for them and they can breathe life into the structure once they decide to do so. The whole team together rescues the homes and earns the appreciation of infinite families of the Pine Tree State by renovating their homes.

Maine Cabin Masters Season 4 Release Date: When will it premiere?

Maine Cabin Masters season 3 premiered on December 3, 2018. As per a post on Maine Cabin Master’s official Facebook page, the show has been renewed for its fourth season and is accepting registrations for the same. “OK – we are officially open for Season 4 Submissions! Email us at mainecabinmasters@gmail.com and we will send you a submission form. (If you submitted last season, we’ve still got you in the hopper. No need to re-submit.)”

We will find out soon what adventures await Chase’s crew in the upcoming episodes. Fans would be eager to watch the crew working their magic on vividly creative building designs, and bringing them to life, which would not only be a treat to the watcher’s eyes but would also instigate innovative ideas in them and who knows they might even inculcate those plans in their real lives in future.

Maine Cabin Masters Season 4 of the series is confirmed to have sixteen new episodes and is expected to release sometime in December 2019 on DIY Network. Watch this space for an official air date for season 4.

Maine Cabin Masters’ adventurous building encounters in all the episodes of all seasons can be watched on the DIY network. Here is a glimpse into the show to refresh your memories.