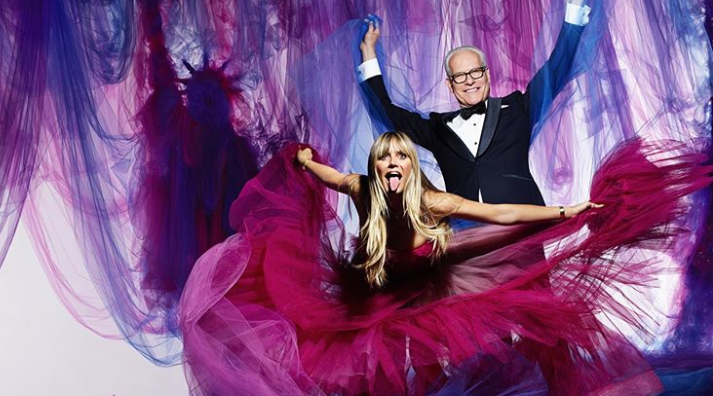 Innovative designs, creative creations, beautiful fabrics, unique patterns, and fabulous textures; if you are someone who gets excited about stylish clothing, then ‘Making The Cut’ is for you! Amazon’s original fashion designing competition show premiered on the streaming service on March 27, 2020.

Following 12 talented hand-picked designers from all over the world, the show is guilty of putting them through rigorous tasks and assignments. The goal is to find a designer whose brand has the potential to become the next big thing in global fashion! Hosted by Heidi Klum and Tim Gunn, the jury consists of fashion icons Naomi Campbell, Nicole Richie, Carine Roitfeld, Joseph Altuzarra, and Chiara Ferragni.

The season started in New York but took to Paris for the designers’ very first assignments. They put up their mini-collections in a showcase in front of the Eiffel Tower and at the Musée Des Arts Décoratifs. The collection must include a runway look and an accessible look. The accessible look is a more commercial and wearable design that is made available on Amazon for sale, immediately, if you win the assignment. These tasks covered their brand identity designs and also their vision of haute-couture. Esther won both the fashion shows and became a top favorite among the judges. Two participants were eliminated for their work.

In episode 3, the assignment gets a bit more challenging. The designers are paired with each other and are ordered to collaborate. They have to come up with three looks together that belong to the brand voice of both the designers. While some breeze through their projects, some find it hard to work as a team and manage time. This round takes place by the Seine river and won by Jonny and Megan. Another contestant is eliminated.

In episode 4, the remaining designers, who are mentored by Tim Gunn himself, receive some motivation to win the competition. With $1 million on the line, the judges feel that the designers are not putting their best foot forward. As a gentle push and to raise the stakes a bit higher, Tim announces an impromptu fashion show. The contestants have 7 hours to come up with a look from their previous fashion show’s leftover fabric. They receive no help from the seamstresses and have to create everything from scratch. While Jonny emerges as the winner, two other contestants are eliminated from the show.

Making the Cut Episode 5 Release Date: When Does it Premiere?

Making The Cut Episode 5 will release on the streaming service on April 10, 2020, at 12 am ET.  Episode 6 will also release on the same day. The show is expected to run for ten episodes. Two episodes are released on Amazon Prime Video every Friday.

Where to Watch Making the Cut Episode 5 Online?

‘Making The Cut’ is exclusively available on Amazon Prime Video. It can be streamed on the desktop website, mobile application, or through Amazon Fire TV stick. Subscribe and watch the episodes directly on the streaming service every Friday.

Heidi Klum and Tim Gunn take the designers and the entire entourage to another fashion city of the world – Tokyo! The contestants are pushed to their extremes when they’re given a street-style fashion challenge. This is a task that most won’t be happy about, as it is something that they do not indulge in. The designers are seen wandering the trendy Tokyo streets for inspiration. While for likes of Jonny, this task is going to be a piece of cake, the others like Sabato, seem to be struggling and stressing out. This challenge can be a real turning point in the quest to find the next fashion king or queen!