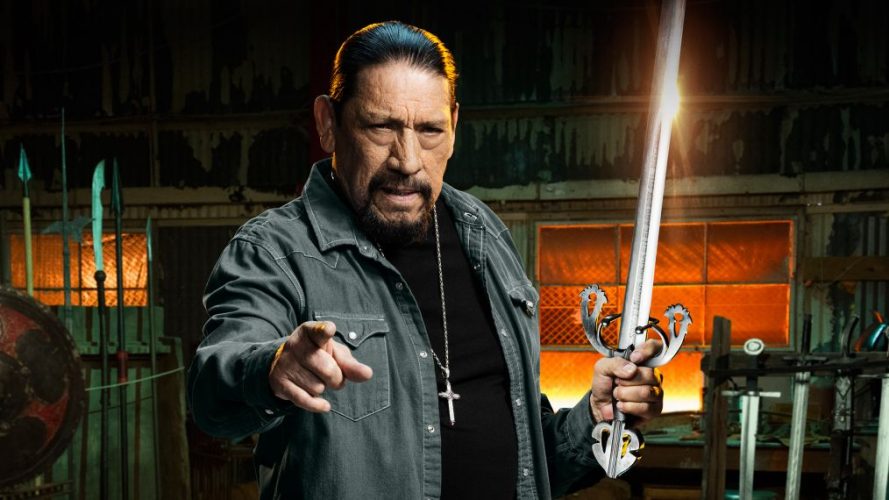 Man at Arms: Art of War is an American reality television docuseries broadcasted on El Rey Network. The show is directed by Alexander Emerson and first started airing on 8 June 2017. The first season had eight episodes and ended on 27 July 2017. As per El Rey Network, Man at Arms “shows the nobility of craftsmanship. Episodes feature iconic weapons that have played a starring role in some of the most memorable scenes in the movies, video games, comics and TV. Expert craftsmen reproduce weapons and armour from scratch to create historical, modern and mythological works of martial arts for testing by experts in real-world applications.”

Danny Trejo serves as the host of the show. He is a Mexican actor who was a criminal and drug addict during his early ages and spent 11 years of his life in and out of jail. While in San Quentin, he owned the lightweight and welterweight boxing titles. A 12-step rehabilitation program changed his life. Trejo was then invited to the sets of Runaway Train (1985), in which he was given a role of convict extra, most probably because of his tough tattooed appearance. He was also offered to train the actors for a boxing match, with a salary of $320 per day. Adjudging his boxing skills, the director of the film, Andrey Konchalovskiy, gave him the role of the opponent boxer. From then on, Trejo has worked in many other films, usually as a villain, or a tough criminal.

Man at Arms: Art of War Plot: What is it about?

Men at Arms: Art of War is a docu-series, featuring a team of expert craftsmen whose aim is to skillfully reproduce from scratch historical weapons from popular TV shows, movies, and video games so as to create the works of martial arts.

The first season includes recreation of weapons of the martial art Kung Fu which needs expert handling and incredible precisions, mankind’s most unique and deadliest weapons from India, the most lethal weapons known to the world from African civilization, the deadly weapons on horseback from the fearsome Mongol Horde, simplest and most effective weapons for the savage battlefield tactics from the Aztec Empire, the bloody weapons from the Egyptian Pharaoh, stories of the legendary blades, and the incredible use of the Katana and Yari by the Samurai.

In the second season, Danny Trejo and his team deal with the knife, sword and the deadly diabolical blades of Baltimore, the Oathkeeper and the Red Viper Spear from modern Hollywood fantasy, the Kalis and the Kampilan from the ancient Philippines of South Pacific, Deathstroke’s brutal twin blades and Wonder Woman’s famed shield from comic book weapons.

Further, they recreate the Aerondight Silver Sword and the Warhammer from the popular video game ‘The Witcher.’ They also recreate the elegant Conquistador breastplate and the brutal Incan macana from the epic struggles of Americas, the scimitar and the mysterious, hidden blade from Assassin’s Creed, the Jian and the 3-section staff from ancient China’s Kung Fu weapons, the Akinaka short sword and the Arsti Thursting spear from Persian Empire, and season ends with the crew, forging the ultimate machete for Machete himself.

Man at Arms: Art of War Season 3 Release Date: When will it premiere?

After receiving positive reviews for season one, Man at Arms: Art of War season 2 premiered on 4 October 2018, featuring the skills and passion of Danny Trejo again who made its first season a huge success. Season 2 ran until 12 December 2018. As of now, there has been no announcement on the cancellation or renewal of season 3, and hence official air dates are not known yet. For the time being, we can do nothing but hope good news. Our best guess is that Man At Arms: Art of War season 3 can release sometime in September or October 2019. We will update this section as soon as we learn more.

Since the third season is yet be renewed and the production team is likely busy at it, you wouldn’t want to miss the opportunity of keeping yourself updated by watching all the episodes of Man at Arms: Art of War here. To get yourself started, watch the trailer below: