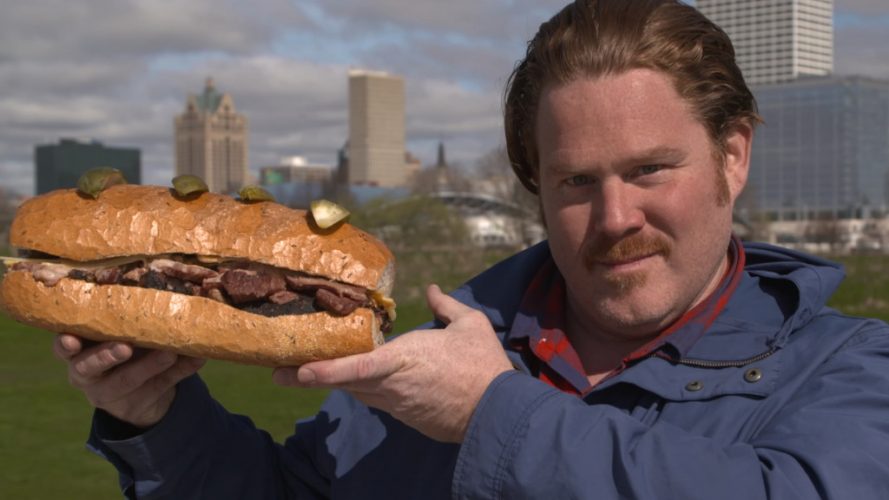 I love watching people tackle gigantic portions of food for sport. There is something immensely fun about the challenge of whether they can finish it in time, and the food that is shown usually always looks lip-smacking. If you are a foodie like me, then I am sure you are a fan of ‘Man v. Food’, which is an American food reality television series that originally aired on the Travel Channel but then moved to the Cooking Channel from season 8.

‘Man v. Food’ sees the host traveling around the US to essentially take up local challenges regarding food which can range from the size of the portions to the spiciness, and many other daunting factors. While some critics have obviously praised the show, especially due to the playful nature of the hosts, and the ratings support their view, there have been those who have been critical of the excesses that this show portrays. In spite of the negativity, the show is going strong, with a ninth season in the works. Here’s all you need to know about ‘Man v. Food’ season 9.

Man v. Food Season 9 Release Date: When will it premiere?

As far as the next season goes, here’s what we know. The show is one of the highest-rated shows on the Travel Channel. So, it is only a matter of time before the show gets renewed for another season. The only issue with renewal is the ongoing pandemic, which is surely going to delay the shoot for the next season. Considering everything we expect, ‘Man v. Food’ season 9 to release sometime in 2021 on Cooking Channel.

Who is the host of Man v. Food?

‘Man v. Food’ mainly revolves around the host of the show. The first host (up to season 4) Adam Richman is from Brooklyn, New York and is a self-educated fanatic of food, who has maintained a travel journal since 1995 that has records of every restaurant he has visited and what he learned from those trips. This made him the perfect fit for the show.

However, since the last few seasons, he has been replaced by Casey Webb, who has been in the restaurant business for almost all his life and is the sort of enthusiastic person who you can trust to tackle any challenge. Webb will return as the host in the upcoming season of ‘Man v. Food’ as well.

One question that a lot of fans keep posing to the hosts of the show is how they remain fit despite eating ginormous portions of food very often. Richman opened up about it saying that he likes to exercise at least twice a day when he is on the road and ensures that he is very hydrated before one of the challenges, not to mention that if possible, he tries not to eat the day before the challenge. Most importantly, once a challenge is taped, he spends around an hour or so on the treadmill. A word to the fans: these challenges might look tasty, but there is a lot of work involved if you do not want to end up with clogged arteries.

What is Man v. Food about?

‘Man v. Food’ follows the host to different parts of the US in an attempt to explore the food of the place. We see him try various food challenges, be it extremely sweet or spicy food, or portions that are simply too huge.

However, this show is more than just the challenge. In the same vein as other shows like Netflix’s ‘Ugly Delicious‘ and ‘Street Food‘, this series also attempts to show an element of the local cuisine. One can also find the host interacting with the restauranteur to bring to us the making of a house specialty. We additionally get an inside view of the local community since the patrons of the place are interviewed, and the show also speaks of the orders that are most talked about, letting us know the community’s preferences.

In case you were wondering, the quantity is not the only thing that the show champions, but the quality of the food as well. So, how does the show determine where the food will be good? Well, a lot of choices are related to Zagat ratings or based on the coverage restaurants have already gotten in magazines like Esquire.

Anyhow, thematically and structurally, every episode has somewhat of a fantasy sequence where the host hypes himself up about the challenge, then we are shown challenge itself, followed by a mock press conference which is similar to the ones conducted at the end of sporting events.

In the upcoming season, we expect to see more of the same, and as we said, Casey is not someone to back down, so we will see him tackle some bold, spicy and big foods. There is nothing that Casey cannot conquer and we are eagerly waiting for him to be back in action.