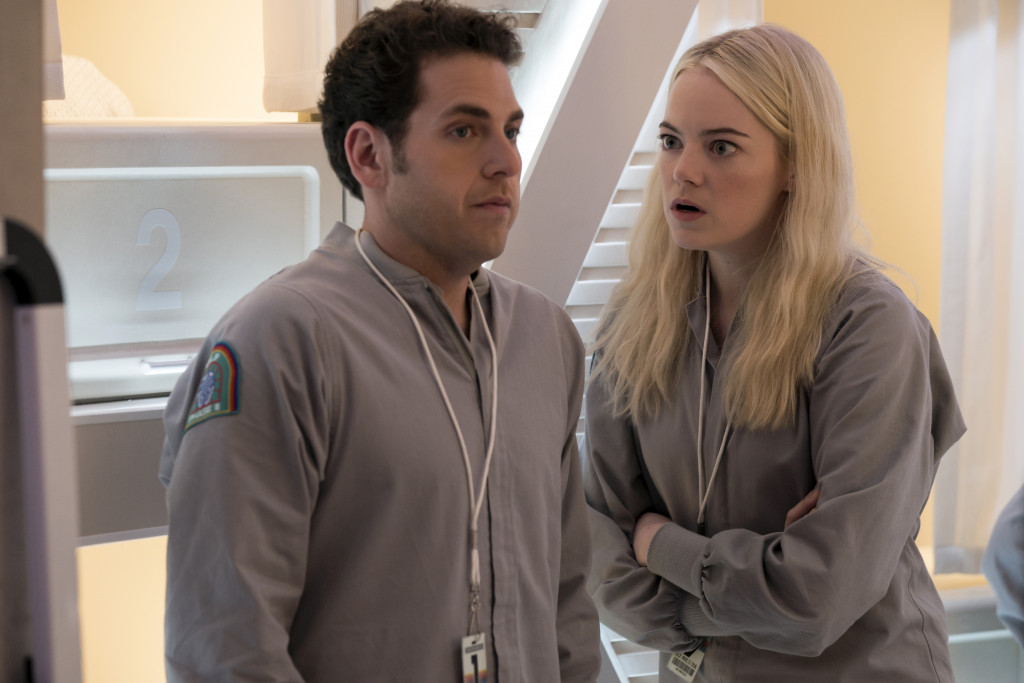 ‘Maniac’ is an American psychological comedy-drama that airs on Netflix and first premiered on September 21, 2018. It has been created by Patrick Somerville of ‘The Leftovers‘ fame and Cary Joji Fukunaga whose notable works include the first season of ‘True Detective‘, ‘Beasts of No Nation‘, and the upcoming ‘Bond 25‘.

When ‘Superbad‘ first came out in 2007, its largely unknown cast caught the eye. The young, raw, and hilarious ensemble included names like Jonah Hill, Emma Stone, Bill Hader, and Michael Cera. All have gone on to achieve worldwide fame and are now A-list superstars. The golden pair of Hill and Stone got back together again, albeit in a different form. The two share the screen in ‘Maniac’, which is based on the Norwegian series of the same name by Espen PA Lervaag, Håakon Bast Mossige, Kjetil Indregard, and Ole Marius Araldsen.

The premise of the show is based on two strangers drawn to a pharmaceutical trial that assures to solve all their problems with no side effects. However, as the story progresses, they and the viewers quickly realize that things have stopped going according to the plan. During its run, not only has the show garnered an intensely strong fan following, but has also been lauded by critics, who have said, ” ‘Maniac’ enthralls with its dazzling visuals, adventurous narrative, and striking performances from both Emma Stone and Jonah Hill.”

Maniac Cast: Who is in it?

The cast of ‘Maniac’ is led by Emma Stone, famous for films like ‘Birdman‘ and ‘The Favourite‘, who plays the role of Annie Landsberg. Annie has a borderline personality disorder and dwells unhealthily on her past relationships. While undergoing the medical trial, in pill-induced states, Stone also portrays other versions of the same character namely Linda Marino, Arlie Kane, Annia, and Ruth.

Jonah Hill, who has upped his game with performances in ‘Moneyball‘ and ‘The Wolf of Wall Street‘, appears in the role of Owen Milgrim, who is the schizophrenic son of a wealthy man. Owen’s streak of independence makes him want to stay without assistance from his family. However, he finds making headway difficult, as his condition makes it hard for him to hold down a job and provide for himself. Hill also plays other versions of the same character namely Bruce Marino, Oliver “Ollie” Hightower, and Snorri.

Justin Theroux, who is known for ‘Mulholland Drive‘ and ‘The Girl on the Train’, plays the role of Dr. James K. Mantleray, who is a scientist woking for the pharmaceutical company that conducts the trial that Annie and Owen sign up for.

Sonoya Mizuno of ‘Crazy Rich Asians‘ and ‘Ex Machina‘ fame appears as Dr. Azumi Fujita, another scientist, who is under immense pressure to deliver results. Gabriel Byrne, who has made appearances in excellent films like ‘The Usual Suspects‘ and ‘Hereditary‘, appears as Porter Milgrim, Owen’s father, a wealthy industrialist. Sally Field, who has numerous stellar performances under her belt like in ‘Lincoln‘, appears as Dr. Greta Mantleray, James’ mother, and a famous therapist. She also portrays Lady Neberdine and Queen Gertrude, versions of the same character. Sally also voices a smart computer that develops a strong bond with one of the doctors and reacts strongly when he dies.

Maniac Plot: What is it about?

The official synopsis on Netflix’s website reads, “The show tells the stories of Annie Landsberg (Emma Stone) and Owen Milgrim (Jonah Hill), two strangers drawn to the late stages of a mysterious pharmaceutical trial, each for their own reasons.  Annie’s disaffected and aimless, fixated on broken relationships with her mother and her sister; Owen, the fifth son of wealthy New York industrialists, has struggled his whole life with a disputed diagnosis of schizophrenia.”

The Hollywood Reporter has summarized the show well, saying, “There are core existential themes in Netflix’s new star-studded limited-series Maniac — mental illness, unhappiness, loneliness, the constraints of family and the notion of the pursuit of happiness as an illusion — that, depending on your response, are either adequately and entertainingly mined or get a little lost under the impressive visual mayhem on the surface.”

The series is intensely moving, surreal, and intriguing, and if there is another season, we hope that it outdoes itself, although that will be a monumental task. Spoilers Ahead! The ending sees Annie and Owen break out of the mental institution and go away in a pickup truck. As their laughter pierces our ears, they, and perhaps us, are left with the crushing realization that almost nothing has changed in their lives. The ending leaves a significant opening from where the next season can pick up from.

Maniac Season 2 Release Date: Will There be Another Season of Maniac?

‘Maniac’ Season 1 premiered on Netflix on September 21, 2018. The show opened to a good response and critical acclaim. Even though I was hopeful of Season 2, considering the fact that director of the show Cary Fukanaga has Bond 25 lined up, chances of renewal didn’t look bright. My doubts proved to be true when speaking to THR, this is what the showrunner replied when asked if the show will return for Season 2: “No. This was always planned as a limited series, and I think that’s another reason why we had the freedom to have a more hopeful ending. A lot of times on TV, you have to throw your characters into distress again near the end to buy the next season, and we don’t have to do that. It is a tremendous amount of energy and imagination to just to make a new show, and so you do have this feeling of wanting to hold on and keep using it, because there’s so much imagination in there, but I think part of why ‘Maniac’ had that improvisational feeling along the way was knowing that this is it. Let’s do it now because this is what ‘Maniac’ is.”

If things change and another season gets announced, we will be the first to notify you about Maniac season 2 release date.

You can check out the trailer for ‘Maniac’ below. If you are a fan of sci-fi shows and haven’t watched this show yet, then you must not wait. Watch ‘Maniac’ immediately.