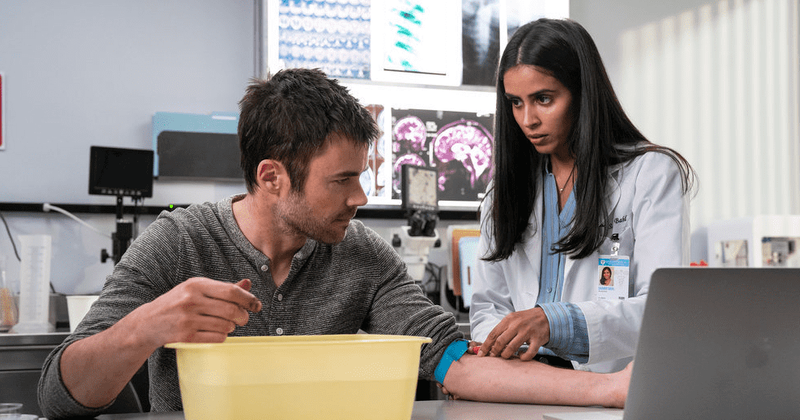 ‘Manifest‘ Season 2 is back after a short break. If you remember, the last episode saw some intense action unfolding, as TJ might have died at an explosion in a club. Moreover, Ben gets a journal that starts glowing, indicating something mystical.

Naturally, you might be curious about what the latest episode portrays. We are here to tell you that, besides walking you through when and where to watch the upcoming episode.

Manifest Season 2 Episode 9 Release Date: When Will It Premiere?

‘Manifest’ Season 2 Episode 9 is slated to be released on Monday, March 10, 2020, at 10/9c on NBC. The upcoming episode sees a storm raging. Meanwhile, inside the Stone household, anxieties are at an all-time high. Olive tries to find some meaning in a text that is centuries old, while Zeke assists Saanvi, whose lab research turns dangerous.

Check out the promo of the episode below.

Where Can I Watch Manifest Season 2 Episode 9 Online?

The episode starts with everybody dealing with the aftermath of the club fire, as bodies continue to be dragged out of the rubble. Zeke is a little worried that time is running out for him. His death is only six months away, apparently, and Saanvi still doesn’t have a cure.

Zeke also seems to have frostbite, which might be the cause of death, eventually. However, for now, there is no muscle or bone damage. Saanvi tells him about some cutting edge experiments but warns him that it might make matters worse.

After having just met Michaela, Zeke cannot imagine things will get worse than his death itself. Saanvi is inclined to agree, meaning Zeke can undergo the treatment if he clears pre-clinical trials. As for Jared, he seems to have fallen into a dark pit. Drea suspects he had something to do with the club fire, and she approaches Michaela.

The latter is on board, and the two decide to look into Jared. He seems to be linked with the Xers. However, upon closer inspection it appears that Jared might be undercover, trying to gain the Xers’ trust. In the Stone household, TJ’s death is being mourned.

Ben has some nightmare, and even experiences a Calling, leading him to believe that a Buddhist meditation session, might be the way to get closure about TJ. However, after their session is over, Ben still hears the chanting. Following the sound, he discovers an underground tunnel, underneath the club that caught fire.

We see that TJ is very much alive, and he says that the Calling instructed him to go underneath. With TJ recovering in the hospital, we are left wondering if the Calling has a different purpose for him.