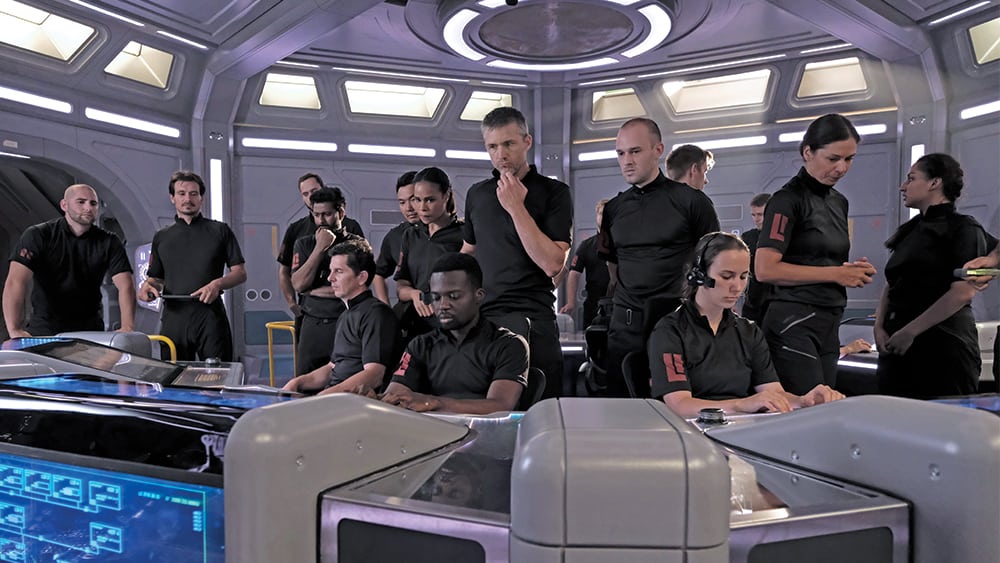 The Lukrum base on set during production of MARS 2. (photo credit: National Geographic/Dusan Marticek)

Produced by National Geographic, ‘Mars’ is a science fiction based TV series which first premiered on November 14, 2016, and airs on NatGeo. The docudrama series blends components of interviews with shots of a group of astronauts, as they land on the red planet, that is, Mars.

The series takes its plot from the 2015 book “How We’ll Live on Mars” by Stephen Petranek. In October 2016, a companion book to the show was released called “Mars: Our Future on the Red Planet”, explaining the science and logic behind the show. Along with the series, a prequel episode was also created and released, called “Before Mars”, which tells the moment in the life of one of the astronauts and the decisions that were made at that point of time.

The sci-fi documentary has been created by Ben Young Mason and Justin Wilkes and we see the fictional narrative unfold in the years 2033 and 2037, while the show makes use of present-day nonfiction interviews to explain the events that unfold in the story. For those interested, the show has primarily been shot in Budapest and Morocco. The series is helmed by Ron Howard, who is known for works like ‘Apollo 13‘, ‘A Beautiful Mind‘, and ‘The Da Vinci Code’.

Naturally, the series has been lauded by critics, who have said, “Ron Howard’s direction ensures that Mars is an attractive endeavor, even if the show struggles to move smoothly between its documentary and fictional elements”.

Mars Cast: Who is in it?

The cast of ‘Mars’ is led by Esai Morales of ‘Ozark‘ fame as Roland St. John, the CEO of Lukrum. Jeff Hephner, known for roles in ‘Chicago Med‘ and ‘Chicago Fire‘, appears as Kurt Hurrelle, the Mission Commander of the Lukrum mars mission, while Roxy Sternberg is seen as Jen Carson, a worker at this company.

Other cast members include Ben Cotton as Ben Sawyer, who is an American mission commander and a systems engineer; Jihae Kim as Hana Seung, who is a mission pilot, a mission commander; Joon Seung who is her twin sister and CAPCOM of mission control located on Earth and later as secretary-general of International Mars Science Foundation. Sammi Rotibi plays Robert Foucault, a mission engineer, and roboticist from Nigeria; Alberto Ammann is seen as Javier Delgado who is a geochemist and a mission hydrologist from Spain; Anamaria Marinca appears in the role of Marta Kamen, a geologist and a mission exobiologist from Russia. Olivier Martinez plays Ed Grann, Mars Missions Corporation’s CEO, and Cosima Shaw plays Leslie Richardson, who is a logistical engineer.

Read More in TV Preview: Those Who Can’t | Unforgotten

Mars Plot: What it is about?

‘Mars’ centers around the first manned mission to colonize the Red Planet in 2033. We see a group of six people who journey from Florida and land on Mars. During the descent, the craft malfunctions and they end up landing away from the designated spot. As they make their way to the destination, their progress is tracked on Earth. This is interspersed with interviews in 2016 from experts like Neil DeGrasse Tyson and Elon Musk, among others, who talk the viewers through the difficulties of a manned mission to Mars.

The second season comprising of 6 episodes shows several years into the future, where a group of astronauts has to build a completely operational “Olympus Town”, establishing mankind as an interplanetary species, and the impact that humankind will have on the Red Planet as dwellers, and vice versa. ‘Mars’ Season 2 proposed the question of whether journeying to Mars would inspire humanity for the better and bring out its best. Season 2 ends with boundaries being pushed further and lives that are lost and saved on this alien planet.

“When you see the bigger picture, it makes you really be cognizant of what we’re doing to our environment,” former NASA astronaut Leland Melvin says in the finale episode.

Mars Season 3 Release Date: When will it premiere?

Being one of the few lauded science fiction shows, ‘Mars’ is already a favorite amongst an audience of all age groups. The anticipation is high, as was expected, and so are expectations from the third season which is yet to be renewed by National Geography. It appears Season 3 will be brought back soon enough. Our guess is that Mars Season 3 will release sometime in December 2019 or early 2020, but do stay tuned for an official update.

Should You Watch Mars?

The juxtaposition of the real and fictional narratives is a hit or miss game sometimes since it shows how dull the actual thing can be. However, the approach to this narrative is smart and works for the overall presentation of the show.

The Hollywood Reporter best sums it up, saying, “The blending of scripted and non-scripted elements in ‘Mars’ is supposed to be what sets it apart as innovative, but some viewers will remember that NatGeo initially approached its ‘Killing’ franchise in the same way, with both talking heads and reenactments, neither completely successful. NatGeo subsequently figured out that adapting Bill O’Reilly’s series with scripts was the correct approach. I get that the producers of ‘Mars’ didn’t want this event pigeon-holed as “another NatGeo docuseries,” but there’s much to be said for identifying what works and emphasizing it.”

You can check out the trailer for Season 2 of ‘Mars’ below. If you have not seen the series and happen to enjoy space and the infinite beyond, then this is the show for you.