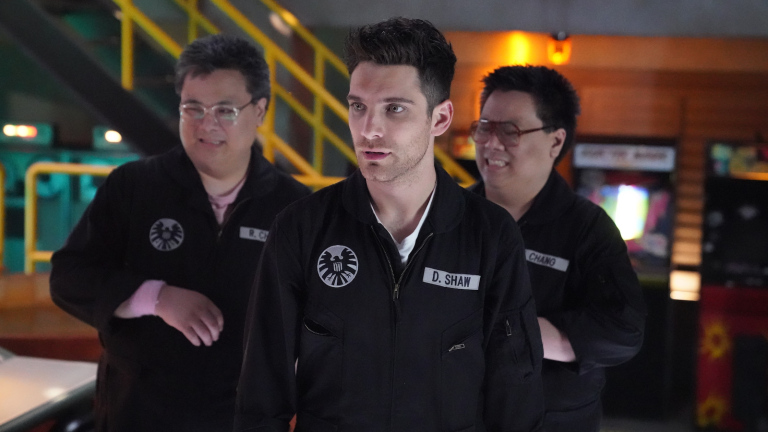 ‘Marvel’s Agents of S.H.I.E.L.D.‘ Season 7 has been fantastic right off the bat. With time travel thrown into the mix, our operatives have been getting up to all sorts of adventures, meeting the father of Hydra’s founder, the person who established S.H.I.E.L.D. and saving the first agent of their organization who was about to be assassinated for finding out Hydra’s infiltration.

In the last episode, we see the team is somewhat divided, but a disagreement between May and Coulson sets the latter on a path where he might hit upon the enemy’s plans. Meanwhile, Mack has a tough time killing the clones of his parents, but the agents get together safely by the end. Curious to find out what happens in the latest episode? We have the rundown and information on when and where to watch the upcoming installment.

Agents of S.H.I.E.L.D. Season 7 Episode 8 Release Date: When Will It Premiere?

The title suggests that we could see a breakdown of the time travel aspects on the show, not to mention how the agents come together. Deke and Mack’s time apart seems to have done everybody a world of good. The episode promises to be more profound than other installments in the season, but we have to see what kind of threat the Chromicoms now pose. Check out the promo here.

The episode sees Mack trying to cope with killing the clones who looked like his parents. Deke tries to comfort him, but they have a falling out and go their ways. It gives the writers a chance to show us the 80s, and they do a great job, from the touches of the Cold War to glam rock and super team action movies. By the time Mack and Deke reunite, it appears that the latter has been busy. He’s built a Deke squad, which is a cover band, but allows the agent to carry out some spy work. Deke relies on Coulson’s subconscious, which is present in every 80s computer, to assist him.

However, they are not alone. Sybil, the Chromicom leader, is also stuck in the same period and makes new Hunters. They go up against the Deke squad, and it seems to be the end of the new team until Mack heroically saves the day. The Zephyr shows up soon after, and the agents, as well as the rest of Deke’s squad, are united, ready for more adventures.