Me, Myself & I Season 2: Premiere Date, Cast, Recap, Update 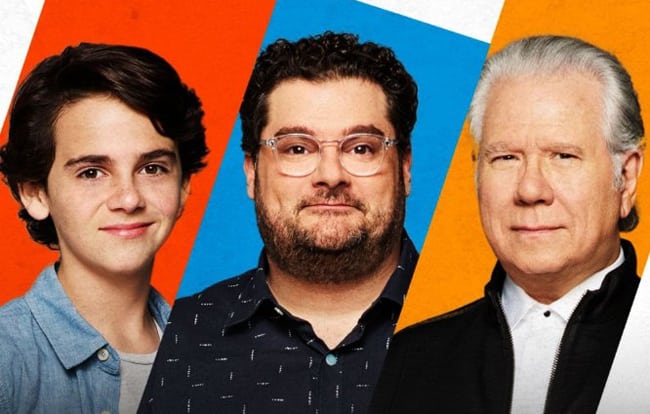 ‘Me, Myself & I’ is an American comedy show created by Dan Kopelman of ‘Malcolm in the Middle‘ and ‘Rules of Engagement‘ fame. It first premiered on September 25, 2017, on CBS.

The show examines one man’s life over a 50-year span. It does so, by exploring three distinct periods of his life. The first being when he is a fourteen-year-old. This period is set in 1991, after which the show moves to the present, where the person is 40 years old, and then moves to the future in 2042, showing the person as a 65-year-old.

The premise of the show is interesting and might remind viewers of the more popular ‘This is Us‘. The fact that all the different time periods of our lives are in constant interaction with each other, with the past never really going away, and the future being inevitable, this series shows some serious potential. However, it somehow could not execute the grand plan and fell flat on its face, be it with its audience or with the critics.

The cast of the show is led by Bobby Moynihan as present-day Alex Riley. He is a 40-year-old businessman, who is an inventor living with his best friend after getting separated from his wife. He also comes to know that his wife plans on moving away with Abby, his daughter.

Jack Dylan Grazer of Stephen King’s ‘It‘ fame plays Alex Riley when he is a 14-year-old teenager who shifts to Los Angeles along with his mother and starts living with his stepfather and stepbrother.

John Larroquette of ‘Boston Legal‘ and ‘McBride’ fame plays the much older Alex Riley, a 65-year-old, retired and looking to re-invent his life. He reconnects with his true love and childhood crush, Nori.

Brain Unger plays Ron, Alex’s stepfather. Jaleel White appears as Darryl, Alex’s childhood best friend. He is seen sharing a house with Alex after his divorce. Kelen Coleman plays Abby, Alex’s daughter when he is shown as a 65-year-old. She is the general manager of Chicago Bulls. Christopher Paul Richards appears as Justin, Alex’s stepbrother (past), Ryan Hansen as Justin (present), Ed Begley Jr. of ‘Pineapple Express‘ and ‘Batman Forever‘ fame, appears as Justin in the future, when he is shown to be the Governor of California. Mandell Maugham is seen as Maggie as Alex’s mother. Nori’s role, in the past, is played by Reylynn Caster, while that in the future is played by Sharon Lawrence of ‘NYPD Blue’ fame.

The story of ‘Me, Myself & I’ revolves around Alex Riley, a 40-year-old man who is a businessman, an inventor, and a Chicago Bulls fan. The series follows him throughout his life starting from 14 years old when he moves with his mother to Los Angeles. He does so to start living with his stepfather and stepbrother. It takes viewers to a time when he is 40 years old who, coming out of a broken marriage and dealing with being a single father while directing his exit from “Inventor’s block.” Then viewers are taken to when he is 65 years old in 2042 and has retired from his successful organization and joined hands with his childhood love, the character who wants to re-invent him in his ways and helps him turn his life around.

However, with all due respect to the layered storytelling and time jumps in the plot, there is little similarity in the actors who play the character of Alex in the three periods. This takes away a degree of believability that one might have had in the narration. Moreover, setting a section in the future, that is 2042, without commenting make about society at that point of time seems like a waste of a perfectly good opportunity to add a speculative science-fiction angle to the plot. The show tries to put across the message that the incidents of present shape our future, but due to poor execution, it ends up seeming like an empty gimmick. However, the three segments of Alex’s life have one clear takeaway, that is, adversity breeds strength, and we can never fully know the big picture, so one must not give up.

Although the actors give stellar performances, overall, the show remains rather unforgettable, since the individual vignettes cannot carry out the comedy properly. The Hollywood Reporter analyzes this wonderfully, saying, “The template is basically the generational lesson-learning of This Is Us meets the thematically linked storytelling of ‘Life in Pieces‘. That means it’s not an easy task Kopelman has set himself, but it’s also not unprecedented, so it’s not too much to ask for an emotional or comedic build to the three stories. Instead, only the first story feels like it would be capable of standing alone.”

Me, Myself & I Season 2 Release Date: When will it premiere?

‘Me, Myself & I’ Season 1 premiered on September 25, 2017. Unfortunately, the show never struck a chord with viewers or critics. In fact, it was one of the lowest-rated shows on CBS. This prompted the network to move the show to a less popular time-slot and air the remaining episodes, a phenomenon known as burning off episodes, and ultimately the show was canceled on July 21, 2018. Though, fans should not lose all their hopes. There’s still a possibility that some other network picks up the show. If that happens, we will update you about ‘Me, Myself & I’ Season 2 release date.

Check out the trailer of ‘Me, Myself & I’ Season 1 below.