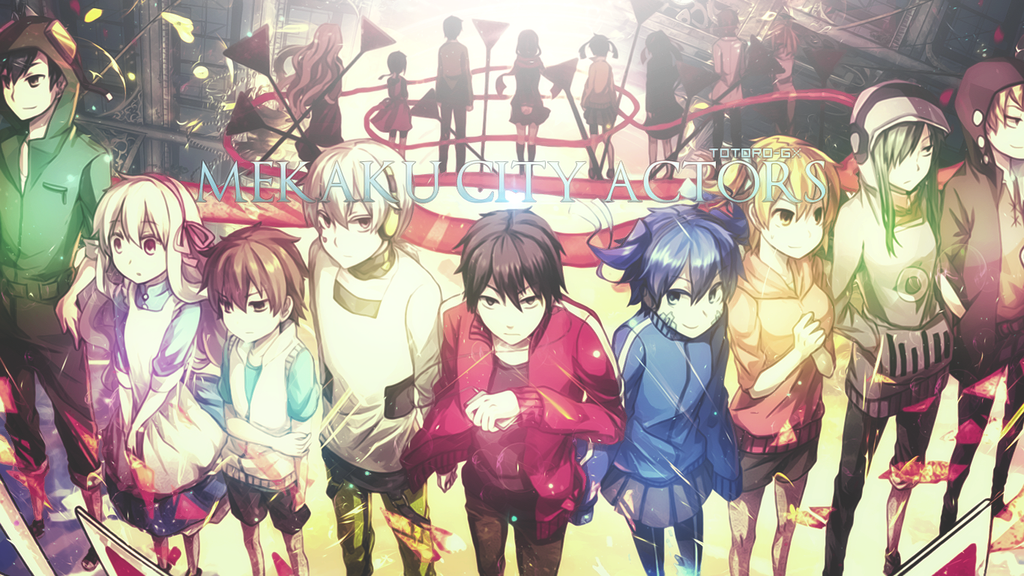 An anime is usually considered to be mediocre when it either presents a very clichéd storyline or has subpar animation quality. In the case of ‘Mekakucity Actors’, most viewers seemed to have a problem with both of these aspects and I ended up watching it with some really low expectations. I do understand the sentiments behinds the reviewers who claim that it has a convoluted story that lacks direction, but I now believe that those comments were a bit exaggerated.

When it comes to the animation, I am a big fan of Shaft Studio and I love many of their creations like ‘3-Gatsu no Lion‘ and ‘Monogatari‘. While I do agree that the quality of this anime could have been better, but it certainly is not below average as many have claimed. Even the synopsis of the show gives off the idea that it is nothing more than typical action-packed supernatural anime that would have some interesting fight scenes and friendship-centric themes. But as soon as I started watching it, I was hooked after the first few episodes as it slowly turned into a beautiful slice-of-life show.

The soundtrack of the anime is quite impressive too and it’s amazing to see how all musical pieces fit in with the scenes they are played with. ‘Mekakucity Actors’ is certainly an underrated anime that deserves more recognition for what offers. Despite its flaws and rushed ending, the anime is enjoyable and all viewers should give it a chance. Just make sure that you do not read any reviews before you start watching it. And if like me, you have already seen it and you’re waiting for its season 2 to come out, then we might have some good news for you in the next section.

Mekakucity Actors Season 2 Release Date: When will it premiere?

‘Mekakucity Actors’ season 1 premiered on April 13, 2014 and came to an end on June 29, 2014. During this span, it aired a total of 12 episodes with each one of them being 23 minutes long. Undoubtedly, the anime was popular soon after its release but it had way too many evident flaws. The first problem with its season one is that it was not able to live up to all the hype around it and coming from Studio Shaft, many fans had high expectations from it. Speaking of the animation studio behind it, the quality of production and art style was not up to the mark. Lastly, the biggest problem is its rushed ending, which many will struggle to come to terms with.

When you consider the mild response and criticism, you would automatically assume that the idea of a sequel sounds far-fetched. But surprisingly, in 2016, a sequel titled ‘Mekakucity Reload’ was announced. The true format of this is still a mystery as some claim that this will be a music album while others say that this will be a whole new season. As of now, no confirmed dates have been released from the studio’s end but the good news is that something new is on its way and all we have to do is patiently wait for it. As soon as we get any confirmation on ‘Mekakucity Actors’ season 2 release date, which could be as soon as 2020, we will update this section.

‘Mekakucity Actors’ is available on Crunchyroll with its original Japanese audio and English subtitles.

Shintarou Kisaragi spends all his time on his computer while he slowly sips on a cold soda. It’s summertime and he has no reasons to go out. But soon, he gets into a heated argument with cyber girl Ene, who lives inside his computer, and ends up spilling all of his soda on his keyboard. He tries looking for a new one online but when he finds out that most stores are closed because of the Obon Festival, he decides to leave his home to go outside and buy a keyboard. As much as he hates leaving his home, he does not really have a choice here as he cannot live without his computer. And just when he thought that his day couldn’t get any worse, he gets caught up in a hostage situation at the store where looks for his new keyboard.

But he gets lucky when a group of teenage mutants with supernatural abilities rescue him and resolve his situation. These teenagers claim to be the “Mekakushi Dan” and force him to join their group along with his cyber girl Ene. He soon learns that all of them are tied together with a bond which was not so apparent at first. But soon as each one’s past is revealed, Shintarou understands the origins of their powers and also how they are all related to each other.

Hibiya Amamiya is a young boy who is the eighth member of the Mekakushi Dan. He has long light brown hair with brown eyes and usually wears a light blue T-shirt with a white-colored vest over it. For a boy who is 12 years old, he is unusually talented at cooking food and also shows a lot of maturity. He is also very short-tempered and judgemental and often gets jealous when someone questions his feelings for Hiyori.

Takane Enomoto also referred to an “Ene”, is the sixth member of the Mekakushi Dan. There was a time when she used to be a human like everyone else but later, she is turned to a computer program. She has long blue hair with eyes of the same color and she wears a baggy jacket over a black skirt. She lives in Shintaro’s computer and had arrived there in the form of a virus through e-mail from an unknown sender. She can transfer herself to anything that runs on electricity and though she can be easily deleted from the computer, she keeps reappearing when the internet is connected. She tries to annoy Shintarou by changing the names of his folder and also deleting data from the laptop.

Shintarou Kirasagi is the main protagonist of the anime who is initially a NEET and spends all of his time at home after best friend Ayano commits suicide. He also has a very high IQ which allows him to remember anything and everything. He is hopelessly addicted to the internet and claims that he would literally die without it. The only person he talks to is Ene who is nothing but a virus that runs on his computer. He later becomes the seventh member of the Mekakushi Dan.

Shuuya Kano, being the third member of the group, is the guy who came up with the name Mekakushi Dan. He has short blond hair and golden catlike eyes. On the outside, he appears to be an unfocused aloof person who simply walks around with a smile on his face. But deep inside, he is actually more mature than most other characters and also has self-loathing tendencies making him believe that he is useless.

Tsubomi Kido, the younger sister of Rin, is the first member of the Mekakushi Dan and is also the present commander of the group. She has an androgynous appearance and is often mistaken for a boy. She appears to very scary but when one gets to know her well, she has a very motherly warmth to her personality and is kind to almost everyone. She listens to music almost all the time with a pair of earphones always dangling down her ears. She is the most level-headed person in the entire group and Shintaro even mentions once that he impressed by her ability to stay calm around friends.