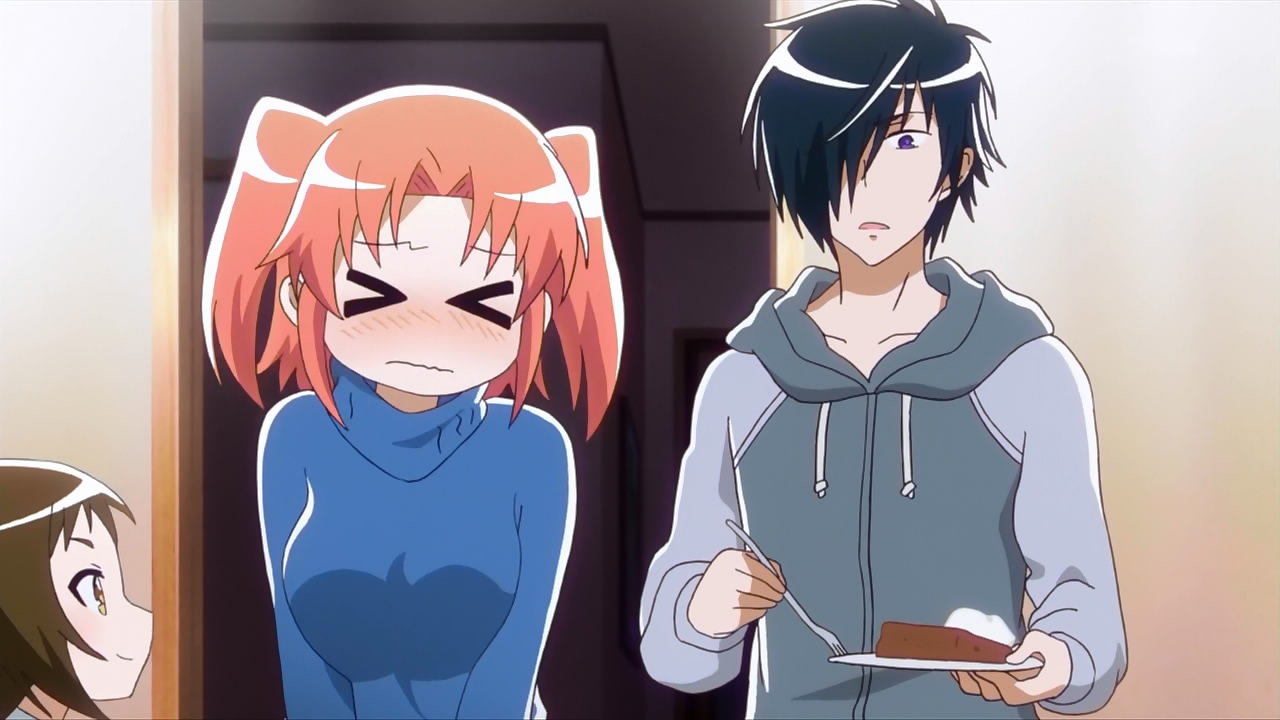 Being an adaptation of quite an unheard manga, ‘Engaged to the Unidentified’ (or Mikakunin de Shinkoukei)came in with very little hype around it. But with time, it gained more popularity than most other similar anime. For the major part of it, it has a very typical story and if you go through its plot summary, you will notice that it is nothing but a series of mundane events. What truly stands out about the anime is how the comedy is executed in the cleverest ways. The overall premise creates a very tense environment and the well-developed characters manage to bring in a vibrant mood to the show. Being a romantic comedy, most viewers would even expect it to have a lot of fan-service, but surprisingly there is hardly any skin show and also, there are absolutely no weird camera angles.

Even the artwork of the anime is quite impressive and the credit for that goes to Doga Kobo studio. The characters have been designed in a very cute and simplistic way which really suits their overall personalities and there is also a strong use of visuals to smartly execute some comic moments of the show. The soundtracks have a more casual feel and are neither good nor too bad. The character mannerisms fit right in with their sweet personalities.

Overall, ‘Engaged to the Unidentified’ is not an anime that you will instantly like but with time, you learn to love its characters and you’ll also start embracing its well-structured comedy. In the end, to enjoy this show, all you need is a little patience till it strikes the right cords with its blend of fantasy, romance, and comedy. And even if you do not enjoy it after watching the first season, it won’t really matter much because it only has 12 episodes.

Engaged To The Unidentified Season 2 Release Date: When will it premiere?

‘Engaged to the Unidentified’ Season 1 consisted of 12 episodes and aired from January 9, 2014 to March 27, 2014. The anime seemed slightly above average and was also accepted well by the viewers. There isn’t much of the manga left for a whole new season, which really makes us doubt the possibilities of its renewal. But then being a slice-of-life show, the creators will not have a tough time making up an original story of their own. But this again would be a big risk considering the fact that the anime only did fairly well even after staying loyal to its manga.

As much as we would love to watch a new season, there isn’t much we can say about it as of now. Considering most factors, it seems a little less likely for now, but we might still just get a new season when we’re least expecting it. As soon as we come to know about ‘Engaged to the Unidentified’ season 2 release date, we will update this section.

Engaged To The Unidentified English Dub:

You can watch ‘Engaged to the Unidentified’ on Crunchyroll and HiDive with its original Japanese audio and English subtitles.

Engaged To The Unidentified Plot:

Kobeni Yonomori is just another teenager who lives an ordinary life until one day everything changes. On her 16th birthday, she is beyond surprised when she meets her fiance and sister-in-law for the first time. Before this, she had no clue that they even existed. Her grandfather had made an arrangement where Hakuya Mitsumine and his younger sister were to move from their traditional countryside home to the Yonomori household in order to strengthen their bonds with their future family.

Shocked and at the same time, extremely excited, Kobeni must now learn to adapt to these abrupt changes. She must also learn to accept her new-found fiance as her future husband. But along the way, she will discover various secrets about her own family that will change everything she had ever known about them. Will she be able to live with all the uncertainty that comes with her future now or will she give in to the pressure and eventually give up on the whole arrangement made by her grandfather?

Engaged To The Unidentified Characters:

Hakuya Mitsumine is Kobeni Yonomori’s fiance, who suddenly shows up at the Yonomori household, on Kobeni’s 16th birthday, along with his younger sister Benio. He is a handsome looking tall guy with long black spiky hair that rests down his forehead covering one of his eyes. He is a little slow when it comes to understanding simple things and later, it is revealed that he is an Inugami with some unusual abilities. His supernatural powers include being able to run long distances at inhuman speeds and also being able to take freakishly long jumps. He also claims that he has the ability to shapeshift into a black dog but refuses to prove it.

For the most part of the show, his true personality remains a mystery to almost everyone because he always maintains a cool and calm demeanor. He also does not like to eat sweets, but goes ahead and eats some when Kobeni makes them. He hides his inner feelings and tries not to reflect them on his expressions. But Kobeni knows him really well and is able to read everything that he feels deep inside. He is very patient and has immense control over all of his actions.

Mashiro Mitsumne is Hakuya’s younger sister and is Kobeni’s future sister-in-law. She is really afraid of U.F.Os and Monsters and she really hates sticky foods and fermented beans. She loves eating sweets along with some warm tea. She has long dark brown hair and huge yellow eyes. Her hair changes from straightened to curled usually depending on her mood. Her high school uniform is too large for her because she is still of grade school age.

She can act like a spoilt brat a lot of times but she still cares about her brother and also a few of her friends. For her age, she appears to be really small and Kobeni looks at her with a skeptic’s eye when she claims to be a 9-year-old. She tries to act older by using a heavy vocabulary and referring to others using their first names. Initially, everyone thinks that she is intellectually very smart but later it is revealed that all this while, she was just using her special abilities to appear intellectually smart.

Kobeni Yonomori is the main character of the show, who is an average high school girl. She balances her school life with all of her household work and even cooks for the entire family. On her 16th birthday, Mashiro suddenly shows up at her place along with his younger sister and claims to be her fiance. She is a little short for her age and has pale skin with salmon pink hair. She also gets the attention of many male characters because of her curvy figure.

She is a very cheerful and optimistic girl who believes that everything happens for a reason and eventually, everything will just work out well for her. Even when things don’t go as planned, she manages to just shrug it off and uses shopping to relieve all of her stress. Everyone around her holds her in very high regard and all of them have a lot of expectations from her, but sometimes, she really feels burdened and weighed down.

Benio Yonomori is Kobeni’s older sister. On the outside, she appears to be an ideal student at the high-school. But she is actually a huge pervert and is the complete opposite of what she portrays herself to be. She has long red hair with brown eyes and at school, she even sports a pair of glasses. According to her schoolmates, she is an extremely talented students’ council president. She is the most popular kid in school and is showered with attention all the time. However, she is actually very possessive when it comes to Mashiro and also has a strange obsession with young looking girls. Kobeni has known Benio all her life and that is the reason why she is the only one who accepts her weird behavior.