When Will Mike Judge Presents: Tales from the Tour Bus Season 3 Premiere on Cinemax? 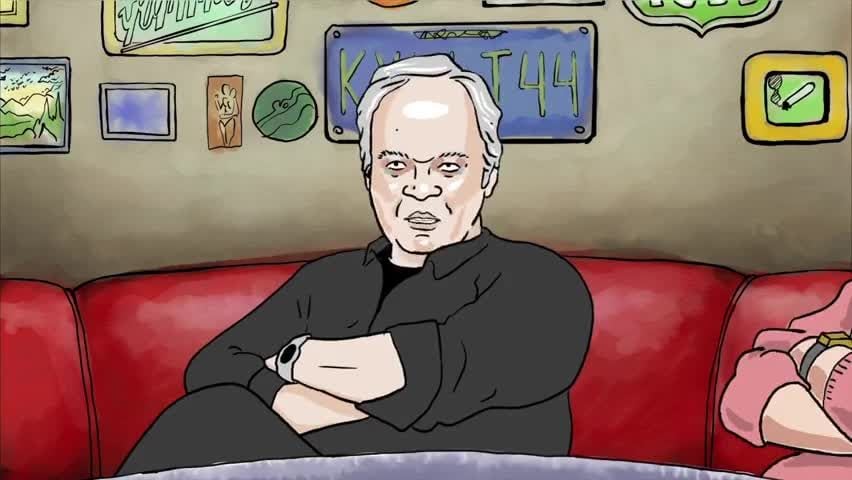 There is something about superstars that invoke a fantasy beyond our very imagination. Cinemax’s Mike Judge Presents: Tales from the Tour Bus is an animated documentary narrated by Mike Judge and features animated avatars of the musicians and those who knew them best. Friends, families or bandmates share their uncensored experiences with the country music’s most legendary artists. The show takes us on a ride of superstardom, music, and glam. Each season, we are introduced to a new genre and the musicians who made it big with their soulful music and crazy antics.

The brilliant animation is accompanied by live footage and news-reports. We are given a peek into the real lives of these musical geniuses through animated interviews with their friends and family. If you are a fan of Beavis and Butt-head, you know the kind of animation to expect. Mike Judge has a very specific kind of story-telling, although his cartoons are full of explicit language and naughty behavior!

The show has had two successful seasons so far. Now the question is, will there be a Mike Judge Presents: Tales from the Tour Bus season 3? We will delve into that question, but first, let’s quickly look into the details of the series.

Mike Judge Presents: Tales from the Tour Bus Cast: Who’s in it?

The super-talented Mike Judge- actor, producer, animator and the creator of cult animated series like Beavis and Butt-head, Silicon Valley, and King of the Hill, has not only produced Tales from the Tour Bus but is also the director and narrator the series. Mike is known for his experimental animation that is largely targeted towards adults and is both parts satire and stupid. If you enjoy shows like Rick and Morty, Family Guy, or the evergreen Simpsons, add Tales from the Tour Bus on your list and you won’t be disappointed.

What is Mike Judge Presents: Tales from the Tour Bus about?

The toon-series has enjoyed two epic seasons of raunchy musicians and tales from their loved ones. The narrative takes us into the land of country music. The larger than life personas of Johnny Paycheck, Jerry Lee Lewis, George Jones and Tammy Wynette, Billy Joe Shaver, Waylon Jennings, and Blaze Foley are presented to us in Judge’s trademark pop-culture animation style. Season one has eight episodes, each about a country-music artist. “Take this job and shove it” is a song that still resonates with the youth and the brilliant artist behind it, Johnny Paycheck is the subject of the very first episode.

Season two focuses on Funk, the groovy music that all music lovers have swayed to. It chronicles the lives of George Clinton, Rick James, Betty Davis, and James Brown. Managers, groupies, family, and agents all are presented in their cartoon avatars telling tales that only they could have witnessed up close. The series is shamelessly funny and does not hold back on all the explicit details. Strong language is used as it is a pop-culture series and can be enjoyed by music lovers as well as casual viewers.

The show does a brilliant job of capturing the bizarre behavior of the stars; the animation will definitely make you smile — from Jerry Lee Lewis buying a machine gun and shooting up a dental clinic while damaging thousands of false teeth to Johnny Paycheck shooting his bus driver’s ear off because he wouldn’t stop for a hamburger. The series leaves you in splits and also gives you a glimpse of the neurotic musicians behind the stage.

One of the most exciting episodes is undoubtedly the historic feud and friendship between two black legends Rick James and Prince. The funky animation invokes both nostalgia and laughter. With real-life footage from the studios, concerts, and TV interviews, the episode takes you on an epic tour. Both legends are remembered for their time-altering music and swag. Prince was a known diva and his music is still very popular. Both legends died a tragic death and were found in similar states. Rick James left the world at 56 and his best-friend turned nemesis, Prince died at the age of 57.

Mike Judge Presents: Tales from the Tour Bus Season 3 Release Date: When will it premiere?

Mike Judge Presents: Tales from the Tour Bus season 2 premiered on November 2, 2018, on Cinemax. After airing for eight episodes, it wrapped up on December 21, 2018.

Season 2, just like its predecessor, was well received by the audience, enjoying a 100% rating by Rotten Tomatoes. As far as a third season goes, Cinemax has made no official announcement. But judging by its popularity and the vast history of music, the audience should be able to enjoy a new season soon enough. And if everything falls in place, Mike Judge Presents: Tales from the Tour Bus season 3 will most likely premiere sometime in November 2020. Stay tuned for additional updates!

Music is universal and no matter how much we deny it, we cannot help but be mesmerized by the aura of superstars. Their epic stage presence or their troublesome personal lives, the curiosity lives on. So if you have not yet had the chance of watching this one of a kind animated music series, catch the trailer right below: