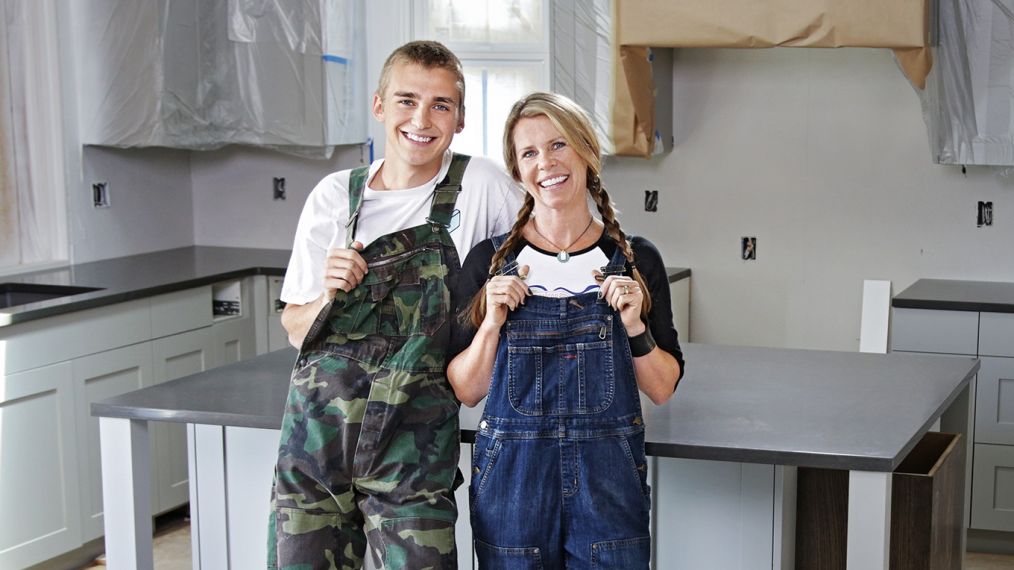 ‘Mom and Me’ is a HGTV reality television series that follows the Oregon mother-son duo of Karrie and Tristan Trowbridge as they gear up to renovate and remodel dilapidated homes for six separate home-owners. The show first premiered on April 6, 2019.

A typical tale of the unexpected success story, the Trowbridges’ foray into television started with an unplanned, unlikely event. The Trowbridges moved to Bend, Oregon in 2000, with hopes of buying their first home. There they slept in a tent for over two months in their futile search for a perfect starter home. Eventually they bought a 1923 house near Newport Market, which was in ‘terrible shape’. That was to be the first experience Karrie would have of home renovation leading to a thriving, subsequent career.  While recalling her experience Karrie says, “We did the work ourselves and when the remodel was finished, I thought, ‘Ooh, I want to do more of this work’.” This led to Karrie’s career of buying, refurnishing and selling homes with her husband Patrick serving as real estate guru and Karrie as general contractor.

However, it was not until 2015, when a local investor hired her to renovate six foreclosed Central Oregon homes for resale, that she enjoyed her first breakthrough success. Completing her makeover on the Oregon homes, Karrie posted a before and after picture of one of the kitchens on her account Instagram, which caught the attention of the production company, ‘Essential Quail Television’. Subsequently, they shot a four-minute ‘sizzle reel’ to pitch the Trowbriges to HGTV, leading to the Trowbridges bagging their eventual television show ‘Mom and Me’.

According to the HGTV press release, Karrie Trowbridge and her 22-year old son, Tristan Trowbridge, “specialize in re-imagining outdated properties to create functional, stylish homes that maximize the beauty of the Pacific Northwest.” In their attempt to describe the Trowbridges’ aesthetics and work process, the press release further states, ” Inspired by the majestic mountains and lush forests surrounding Bend, Oregon, designer Karrie and her 22-year-old son and design assistant, Tristan, customize comfortable and inviting living spaces for families using unique materials, including locally sourced reclaimed wood, hand painted tiles, steel shelving and concrete counter-tops.” Read on to know all about this reality series.

Casting began for the series on February, 2018, with the production company ‘Essential Quail Television’ asking for  homeowners who wanted their homes to be renovated and were willing to spend a minimum budget of 60,000 dollars for the same to sign up. In a scenario of more than the required number of willing participants, the homes would be selected according to their character and the level of urgency for immediate renovation. Featuring married couples, divorced couples, friends and so on, ‘Mom and Me’ offers participants coming from very different socio-economic backgrounds. Home renovator extraordinaire Karrie Trowbride and her 22-year-old son cum protege Tristan Trowbridge together form the primary members of the show’s cast as they miraculously remodel Oregon dilapidated homes to perfection in each episode.

Mom and Me Plot: What is it about?

‘Mom and Me’ follows the Trowbridges in their attempt to remodel Oregon homes. Aimed at a younger demographic primarily of soon to be first time homeowners, ‘Mom  and Me’ incorporates playful banter between it lead mother-son duo and closely follows their work process. “There’s a magic that happens with them on-screen, and that’s why they have made it this far,” said Patrick Trowbridge, Karrie’s husband and Tristan’s father.

While the makeover narrative might serve as just a plot for the tv show, it has essentially been the Trowbriges’ life for the last two decades. In their process leading to the eventual HGTV show, the Trowbridges have worked on numerous homes with miraculous results. “People trusted me with their home even though it was for a reality TV show. My number one goal was to ensure that the clients are happy with the results”, said Karrie while speaking about ‘Mom and Me’.

The show comprises of seven episodes in total (tv pilot and six additional episodes), each dealing with a separate homeowner. Episode 1 of season 1, titled ‘Oregon Ranch House Flip’ follows Karrie and her son Tristan, as they team up to renovate an outdated ranch house in Central Oregon. Dividing the responsibilities between each other, Karrie raises the roof height, designs a state-of-the art kitchen, and a second bathroom, while Tristan create the perfect outdoor space for recreational activities. My personal favourite is the episode featuring foster parents, cleverly titled ‘Goodbye 70s’. Karrie and Tristan in their attempt to redesign the layout for a rural home, creates a pizza-party friendly kitchen, updates the 1970s disco bathrooms, and adds new bedrooms for the kids.

Mom and Me Season 2 Release Date: When will it premiere?

‘Mom and Me’ season 1 premiered on HGTV on April 6, 2019. As far as the next season goes, we don’t have an official announcement yet. Though considering the uniqueness of the show, we would be surprised if it doesn’t get another season. Our best guess is that if the show does get renewed, ‘Mom and Me’ season 2 can release sometime in April, 2020. We will update this section as soon as we hear more.

Mom and Me Trailer:

Here’s the trailer of Season 1 to give you a more precise idea about what the HGTV reality series is about.