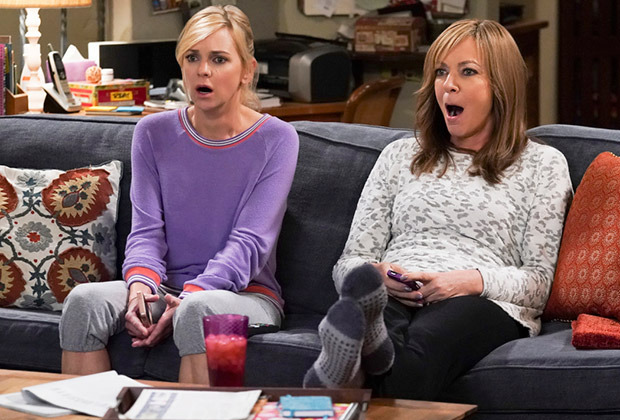 The Chuck Lorre created series ‘Mom’ always sticks to its central theme of balancing real life with comic elements. The long-running sitcom, which airs on CBS, is currently in its seventh season. Fans might already know that ‘Mom’ follows Christy, an alcoholic and a drug addict, who shifts to Napa Valley with an aim to get her life back on track. But the situation becomes complicated when her mum Bonnie is also revealed to suffer from drug addiction.

Meanwhile, Bonnie shares a close relationship with her fiance while Christy needs to tackle her children, who have their own share of problems. For instance, Violet is engaged to a much older man and Roscoe lives with his dad. In the midst of all these issues, Christy attempts to survive with the support of AA — while doing her best to remain sober.

The seventh season of ‘Mom’ debuted on September 26, 2019. It was received well by fans and after spanning 10 episodes, went on a hiatus on December 12, 2019. It then resumed with its 11th episode on January 9, 2020, and recently aired its 15th episode this week. As you might notice, ‘Mom’, like its predecessors, has stayed true to its routine of pairing two odd topics in its episode names. For instance, episode 15 is called “Somebody’s Grandmother and the A-List”. We will explain the weird pairing later.

For now, you should know that the show is now all set to release its next episode. Here’s all we know about ‘Mom’ season 7 episode 16.

Mom Season 7 Episode 16 Release Date: When Will It Premiere?

Here is what to expect from the upcoming episode as per the official synopsis: “Bonnie helps Christy gain perspective as she considers a life-changing decision; and as Jill fears she’s running out of time to have a baby, she consults a fertility doctor.”

If you have an active cable subscription, you can catch the latest episode of ‘Mom’ when it is released on CBS at the aforementioned time slot. You can also catch the season online on the channel’s official website and stream it on CBS All Access.

Cord-cutting alternatives include live-streaming the season on Fubo, DirectTV, and YouTube TV. You can additionally catch previous seasons on Hulu. Seasons 1-6 are also available for rent on Amazon Prime Video.

The central theme of season 7 is the positive developments in the lives of all the protagonists in ‘Mom’. We follow Christy as she resumes her education to get her law degree — a dream she had held throughout her whole life. Her mum Bonnie’s relationship with hubby Adam is also going well.

Of course, the members of the AA, Marjorie, Jill, Wendy, and Tammy make regular appearances to lend support and offer wisdom. Together, they attempt to stay sober while trying to face all of life’s problems head-on.

In this week’s episode, titled “Cheddar Cheese and a Squirrel Circus”, “Christy helps Marjorie prepare for her first date since her husband’s passing. Also, Bonnie’s friendship with Jill is put to the test when a past indiscretion resurfaces” — as per CBS’ official synopsis.