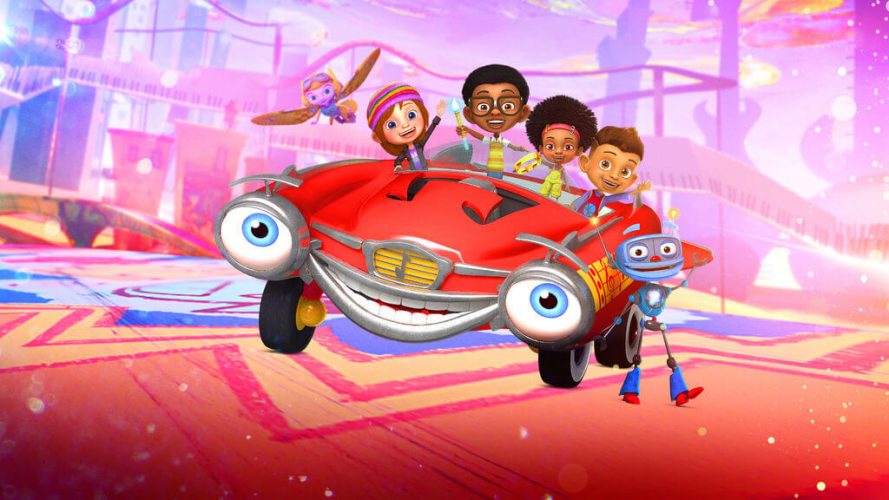 ‘Motown Magic’, an animated television series, is an ideal show for children, that airs on Netflix. That’s right. Netflix is not only famous for thriller, crime, romantic drama series, but also for animation. The show is an urban fantasy series created and directed by Josh Wakely, who is a director, screenwriter, published author, and producer from Australia. Wakely has managed to secure the rights to three of the world’s most prestigious music publishing catalogs, that is The Beatles, Motown, and Bob Dylan, and University Music Group’s library, in order to make films and television projects that are based on them. He has already made the Emmy Award-winning show, ‘Beat Bugs‘, which features music by The Beatles.

‘Motown Magic’ features versions of songs by popular artists like Michael Jackson, Stevie Wonder, Marvin Gaye, The Supremes, The Temptations, and Smokey Robinson. The show is about an imaginative boy, Ben, who brings various colorful street art to life using his magic paintbrush and the classic sounds of Motown. Naturally, the show was widely acknowledged by critics for its efforts to re-imagine Motown songs for such a young audience. This children’s urban fantasy first premiered on November 20, 2018.

Motown Magic Cast: Who is in it?

‘Motown Magic’ features different characters for whom the following celebrities have given voice:

Ryan Robinson voices Grandpa Marvin; Betsy Kenny is recognized as Angie, while Monie Mon lends her voice to the character of Mickey. Originally known as Monica Dyson, Monie has also worked in ‘Kingdom Hearts II’ (2005), ‘Kingdom Hearts II: Final Max+’ (2007), and ‘I’m Every Woman’ (2008). Byron Marc Newsome appears as Uncle Rod. He is known for ‘Criminal Minds‘ (2005), ‘Days of our Lives’, and ‘Fallout 4‘ (2015). Alex Thomas voices the role of Jimmy Mack. In the upcoming season, hopefully, most of the main cast will return and we might even get to see some new faces who bring the magic to this show.

Motown Magic Plot: What is it about?

‘Motown Magic’ is an animated fantasy series featuring an eight-year-old boy named Ben, who is wide-eyed and has a big heart. He finds a magical paintbrush while trying to recognize his special talent to display in a school project. While widening his imagination, he opens the door to a new colorful world. He creates wonders with the help of the paintbrush. He fills life in a classic car to cheer his Grandpa; he creates a talking robot to get Angie on a magical adventure; he makes use of a dancing machine to help him dance, and he even uses the brush to go to a magical place to celebrate his birthday.

This animated series is ideal for children and for the adults who still have a child in them. The creator of the show shared his inspiration for ‘Motown Magic’ in an interview, saying, “Initially, the music which has been a big part of my life since I was a kid and then becoming increasingly aware of its cultural importance. The theme of the show is that creativity is magic. Creativity has transformative power. Stevie Wonder came from the back streets of Detroit, yet he transformed his community. I wanted people and cultures around the world to be inspired to find creativity in their own lives.”

Perhaps, the most striking aspect of the show is its music and the way Wakely has used his series to bring soul music to a young generation. In today’s age of streaming, a lot more music is accessible but with a shift in the industry, it is easy for songs like these to become disposable. However, ‘Motown Magic’ is there to stop it from happening. The creator says, “I want to make sure that in 10, 20 years, kids are still talking about this music. It’s Shakespeare; it’s Dickens; it’s Tolstoy. It’s that good, and that’s the reason it stuck around.” Since this is the primary aim of the show, much of the plot is centered around propagating the music, and a typical episode sees the characters face a challenge that can be overcome with the magic of stories and music.

Through this show, Wakely has assured the fact that kids will keep propagating soul music to the future generations as well since they are likely to be affected by it when exposed to this kind of music at a young age. Take it from me, if you want the younger generation to be exposed to great art, be it literature, films, or music, you have to water it down for them and present it in a palatable manner when they are young and open to various views. This is exactly what this show tries to do, and hopefully, will keep doing in the upcoming season as well.

Motown Magic Season 3 Release Date: When will it premiere?

‘Motown Magic’ Season 2 premiered on June 28, 2018, on Netflix. As far as the next season goes, we don’t have an official announcement yet. Though considering the fact that shows focussing on children have become especially important for Netflix, we would be surprised if it doesn’t get another season. Our best guess is that if the show does get renewed, ‘Motown Magic’ Season 3 can release sometime in November 2019. We will update this section as soon as we hear more.

While we wait for season 3, check out the trailer for Season 1 here. Or head over to Netflix to catch all the episodes of the previous season.