When Will Mountain Monsters Season 7 Premiere on Travel Channel? 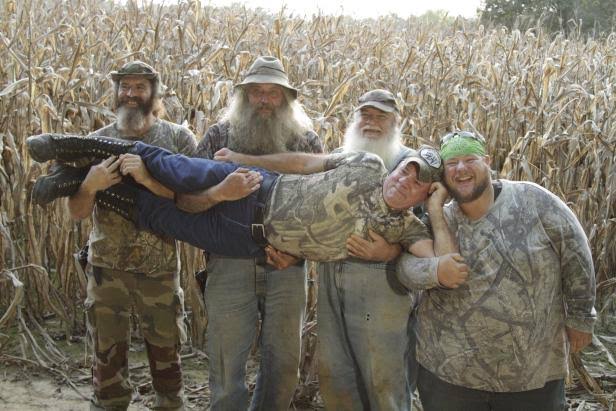 ‘Mountain Monsters’ is Travel Channel’s long-running reality tv show, which embraces the interesting subject of cryptozoology. The documentary traces the multiple encounters of the members of Appalachian Investigators of Mysterious Sightings (AIMS), who embark on various missions while venturing deep into the woods of the Appalachian Mountains. This team of six hardy, brave native West Virginian hunters and trappers scour the forests to reveal the whereabouts of unidentified creatures. These entities can be anything, ranging from the Bigfoot to Wolfman, Mothman, and Lizard Demon.

The show had originally released on Destination America in 2013 and continued airing on the platform up to its fifth season in 2017. After that, it was on hiatus, following which it again returned with its season 6 on Travel Channel in 2019. Now the question is, will there be a ‘Mountain Monsters’ season 7? We will delve into that question, but first let’s quickly look into the details of the series.

Mountain Monsters Cast: Who is in it?

The cast of Mountain Monsters comprises the six members of the AIMS team, who are John Tice, Jacob Lowe, Joseph Lott, Jeff Headlee, Willy McQuillian, and William Neff. These hunters and trappers reside in the vicinity of the Appalachian Mountains and are cryptozoology experts, well-versed in unraveling evidence surrounding the existence of mythological entities from folklore.

Founded by Tice, Headlee, and McQuillian, AIMS deals in tracing the whereabouts and proving that mythical beings still roam the surface of the earth. Some of the creatures tracked by the crew include the Bigfoot, Werewolf, Hellhound, Lizard Man, and Mothman, to give a few examples.

Season 7, as and when it happens, will obviously bring back the AIMS crew as they continue on their quests of finding more weird, mystical entities.

What is Mountain Monsters about?

‘Mountain Monsters’, which has managed to garner a cult following since its launch, is set against the backdrop of the Appalachian Mountains, which are notorious for housing some of the most infamous, mysterious creatures. In fact, in the US, this region has recorded the maximum number of apparent mythical-entity sightings. And ‘Mountain Monsters’ attempts to shed light on the truth of the reports by following a team of hardy men, who have made it their goal to track such elusive monsters.

Some of the creatures featured across the episodes include the Kentucky Wolfman, Lizard Demon, as well as the Mothman. Our heroes first reach the spot which is rumored to hide the said entity and then hold discussions with the local inhabitants of the area. After gathering enough evidence, they set the final trap. Viewers can witness proof about the beast’s existence via images and audio or video recordings. Toward the end, the crew sets off on their ultimate hunt in the darkness. To summarize, ‘Mountain Monsters’ is about: “When folklore bites back and leaves a trail of proof, this band of native West Virginian sons seeks the truth.”

‘Mountain Monsters’ Season 6 embraces the same trope and picks up the story from where season 5 leaves off. During the season 5 finale, we witness the AIMS team journeying out to capture the Woman of the Woods and reaching the Dark Forest. But they unravel far more terrible truths and decide to return. However, when Buck tells that he left his camera there, they return to search for it. Here, they enter a strange barn where they learn from the Rogue Team that they need to locate six creatures in order to get to the prime villain — the Spearfinger.

Among the six terrifying monsters, we first meet the 7-foot-tall wolf-being known as the Waya Woman, which is rumored to live in Jackson County. Further exploration leads the team to an abandoned blue house whose two families had been murdered, with both slayings related to Waya. Our six hillbilly hunters now need to partake in two rituals and prepare for the final encounter. The next creatures in the list are the Silver Giant, Cherokee Death Cat, and Coyote King. After many hardships, the group heads to a location which has a pair of finely crafted torches that finally unravel some information about the fabled Spearfinger.

Season 7, as and when it happens, is expected to feature more elusive monsters and document the spine-chilling quests of this daredevil team of explorers.

Mountain Monsters Season 7 Release Date: When will it premiere?

One of the most-watched shows on Travel, ‘Mountain Monsters’ started airing in this channel in 2017 after a two-year hiatus, following the conclusion of its fifth season. Now that the series is back, we expect it to continue for several more seasons. And when renewed, ‘Mountain Monsters’ season 7 should premiere sometime in August 2020.

While we wait for more updates on season 7, you can watch the official trailer for season 6 of ‘Mountain Monsters’ below.