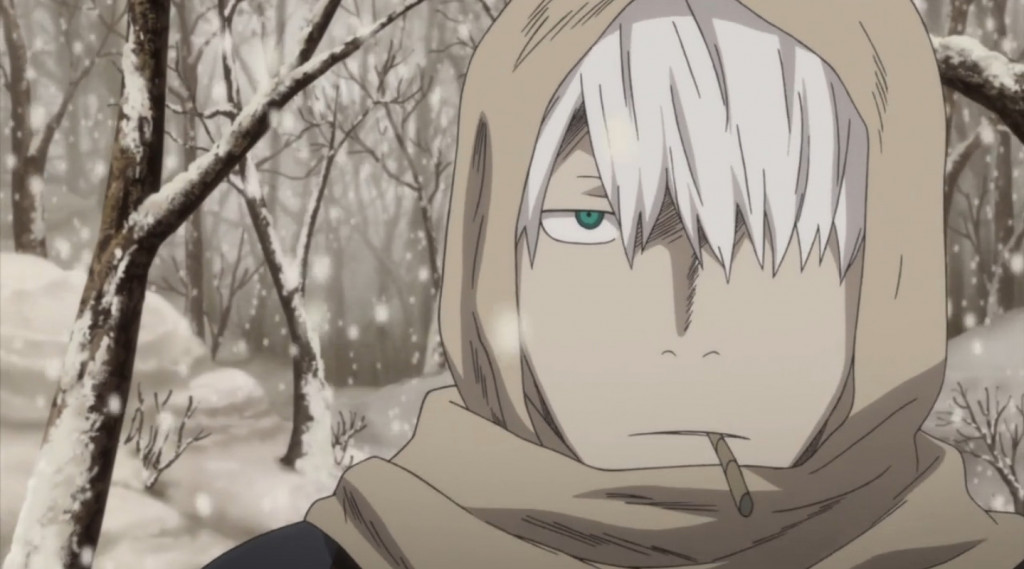 ‘Mushishi Zoku Shou’, more commonly known as ‘Mushishi’, is a Japanese manga series written and illustrated by Yuki Urushibara. It is an extremely well received and popular anime that earned Yuki several awards, including the famed ‘Excellence Prize for Manga’ at the 2003 Japan Media Arts Festival. The series first began circulating on ‘Afternoon Seasons Zōkan’ in the year 1999, at which point it was shifted to ‘Monthly Afternoon’ in December 2002. It ran till August of 2008, producing a total of 10 tankōbon volumes, which are compiled by Kodansha. These were eventually released in North America by Del Ray, starting from January of 2007.

An anime series is adapted by Artland, which started broadcasting in October 2005 on Fuji Television. It continued till June of 2006, producing a total of 26 episodes. It is directed by Hiroshi Nagahama, who put together an individual team called the ‘Mushishi Production Committee’ solely for working on this project. This committee contained notable production houses in the industry like Avex Entertainment and Marvelous Entertainment. As a result of his hard work and dedication, the anime was extremely well received by both critics and fans and still remains one of the highlights of his career.

Marvelous Entertainment and Avex Entertainment released the entire first season of the anime in DVD format and made it available to fans with both full-purchase and rental options. The rental option provides the entire season in nine separate DVDs while it’s available in only five when one purchases it completely. Due to the popularity of the anime, they also released a DVD boxset collection that contained all the episodes in the first season on the 28th of March, 2008 and a Blu-ray version of the same on the 27th of March the following year. The Blu-ray edition also received a Christmas special limited edition collector’s boxset that came with alternate artwork and various other incentives for hardcore enthusiasts.

Funimation licensed the anime in North America and proceeded to market it heavily, knowing that it had potential. This continued till very late into the series when they held a promotional event at the Anime Expo of 2007 that hosted Nagahama from the 29th of June to the 2nd of July, 2007 while the first episode aired earlier in January in the same year. Not only that, but Funimation also decided to exhibit the first four episodes of the anime at ImaginAsian Theater, Studio Movie Grill, and Alamo Drafthouse, all situated at notable locations such as New York and Texas later in July in the same year.

The aggressive marketing tactics had huge impact and the series grew to be one of the most well received anime of the season. Funimation, which recognized its popularity, streamed the anime on a bunch of popular streaming portals such as Hulu, Anime News Network, Crackle and Joost in addition to handing over the rights of the same to Comcast in order to broadcast on their cable networks. The entire first season is available on six DVDs that can be purchased individually or 4 boxset collections containing additional merch. Almost all of the DVDs and the boxset collections have been featured on the top 20 list of best-selling charts published by Oricon.

In 2013, a special episode aired in Japan on Tokyo MX, Gunma TV, Tochigi TV and BS11, called ‘Mushishi Tokubetsu-hen: Hihamukage’ (or ‘The Shadow That Devours the Sun’ in English), which is based on the two-part manga sidestory. Initially streamed on Niconico, a special DVD and blu-ray edition was released by Aniplex on the April 23, 2014. In addition to teasing a new season for the anime, it also laid the groundwork for the same ensuring that fans are well caught up with the first season and properly geared up for the following.

Mushishi Season 3 Release Date: When Will it Premiere?

Mushishi season 2, titled ‘Mushishi: Zoku-Shō’, started airing on April 5, 2014 on the popular Tokyo MX channel with other networks picking it up later. It is also produced by Artland and directed by Hiroshi Nagahama who decided that they wanted to retain the original cast from season 1 in order to maintain the integrity of the anime and its characters. As a result, fans were instantly able to connect with their favorite characters and the TRP for the show soared above the roofs.

The second season is divided into two ‘halves’ divided by a special episode in between, called ‘Mushishi Tokubetsu-hen: Odoro no Michi’(or ‘Mushishi: Path of Thorns’ in English). The first half of the season that contained the first 10 episodes were aired between the 5th April and the 21st June with the special being aired on the August 20, 2015. As planned, the latter half of ‘Mushishi: Zoku-Shō’ started airing on the 19th of October and ended on the December 21, 2015, producing another 10 episodes. An anime film that serves as a sequel was released on the 16th of May, 2015, titled ‘Mushishi Zoku-Shō: Suzu no Shizuku’, or ‘Mushishi: Bell Droplets’ in English.

Being one of the best anime of the decade as proclaimed by some of its fans, there is always a chance that we will be blessed with another season of ‘Mushishi’. However, since the past 5 years, we haven’t seen the release of the original source material; so it’s gonna be one long wait. Still, we are sure that it’s going to happen, given the popularity and the success of the first two seasons. Our best guess is that Mushishi season 3 release date could fall sometime in 2020 or 2021. We will update this section as soon as we hear more.

The English dub for the anime is one of the best translations out there, featuring Travis Willingham in the role of Ginko. It is presently licensed by Aniplex of America and Crunchyroll with online streaming services also provided by the latter.

Set in an imaginary version of Japan between the Edo and the Meiji era, the plot revolves around Ginko and his confrontations with ethereal primitive creatures called the ‘mushi’. These creatures are more primitive than the other animals. They inhabit the land and as a result, cannot be perceived by most humans. However, due to their supernatural nature, their actions can be felt creating ripples through our very plane of existence. Therefore, even if humans are not able to see the mushi with their own eyes, they can definitely feel their effects on their immediate surroundings. It is here that we are introduced to a special group of humans that are able to see and perceive them and as a result, protect the rest of the population from their harmful effects. Ginko, being extremely gifted at the art, calls himself the ‘Mushi Master’ or ‘Mushi-shi’ and proceeds to travel from place to place in order to conduct research on them, understand their abilities and protect other people who are suffering due to them.

Ginko: Due to the episodic nature of the series with the central focus on Ginko, there are not many recurring characters in the anime other than Ginko himself and the creatures that attack him. Ginko, or ‘mushi-shi’, is a self –proclaimed master of the mushi, which are strange, supernatural creatures that cannot be perceived by normal humans due to their ethereal nature. Having been blessed with a green eye that aids him in being able to see and ultimately fight these creatures, he decides to travel from location to location using his knowledge about the monsters to conduct further research on them and take them down. This way he is able to help people around him who do not have the ability to perceive the mushi but are facing problems because of them.

Although generally he has a laid back personality, Ginko can definitely get serious when the situation demands him and being extremely gifted at his art, he is capable of pulling off miraculous victories. He constantly stresses on the fact that the mushi are actually harmless creatures that are just trying to exist and survive in the world like everyone else, without understanding its consequences. As a result, he always tries to opt the non-violent route, only resorting to violent tactics when absolutely necessary.