Will There be a Natasha Leggero & Moshe Kasher: The Honeymoon Stand Up Specials Season 2? 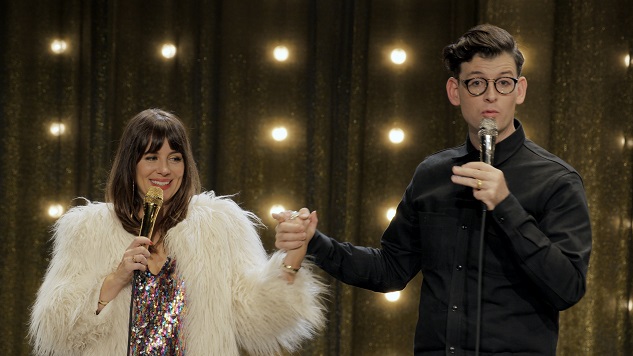 While most of the mainstream entertainment is submerged today in a TV consciousness full of reality shows and the semblance of either cutthroat competitions or corny set-pieces like in many of Bravo’s gated community lifestyle showcase, only a handful of genres keep qualitatively superior content in unscripted (and mainstream TV) alive. Comedy subroutines are definitely one of these, and they often serve a higher purpose just in the same fashion as the corrective restoration comedies of yore, while also far outshining the generic reality game shows in pure entertainment value – if the comedian’s style of humour clicks with you, that is.

It would seem the equation would be revolutionised with the advent of more internet-based streaming networks like Netflix and Hulu, and the march of vlogging and comedy on the internet. But oddly enough, the traditional stand-up comedy subroutines have not eroded away, and far from it, in fact, they are reinforced by Netflix’s own swath of stand-up comedy specials by the dozens in recent years. Among these in April 2018 was ‘The Honeymoon Standup Specials’, an amalgamation of three episodes of unplugged comedy, roasting, and even the unique feature of genuine relationship counselling one of the very few times that a real-life comedian couple have hosted a stand-up show together.

A cast for a comedy routine, it would be needless to say, is the comedian – or the comedians themselves, as the case is with multiple hosts. ‘The Honeymoon Stand Up Specials’ is hosted by Moshe Kasher and Natasha Leggero, a recently married couple, both of whom have a long career on the silver screen – with Natasha partaking in such big names as Bojack Horseman (Heather’s voice), The Do-Over, and Another Period. Another Period is co-incidentally also written by Moshe, who has quite a few significant showing gigs in the current decade, including ‘The New Normal’ and ‘Problematic with Moshe Kasher’.

What is Natasha Leggero & Moshe Kasher: The Honeymoon Stand Up Specials about?

The show features three episodes of stand-up comedy, with Natasha taking precedence in the first, Moshe in the second, and then the couple joining in for a rapid-fire round on the finale as the show is wrapped up with a relationship counselling session as brave participants from the audience get up on the stage.

Even though the project was experimental and to host a comedy stand-up as a couple, as Moshe put it in an interview, is ‘corny’, but the show nevertheless was met with a very positive reception. Stand-up comedy specials do not really work in a conventional season-structure basis, and far as something like a renewal is concerned, Netflix should greelight it right away because both of the hosts are individually established and well-reputed comedians. That said, the possibility of a season 2 mostly depends on whether Moshe and Natasha want to run with the formula for a second time. If they do, we will probably see it air immediately afterwards – however, they have not given any conclusive note on when or whether they will return with a similar series of specials as a follow-up season again. The air date for Natasha Leggero & Moshe Kasher: The Honeymoon Stand Up Specials Season 2 is therefore still undecided.

With not much news about a show from Leggero or Kasher, either from official Netflix sources or from their social media handles, there is no teaser or trailer released for another go at a second series of stand-up specials from the comedic soulful duo. So instead, here you can watch a clip from The Hollywood Reporter that features the hosts in an interview which will give you a fairly good idea about the show.