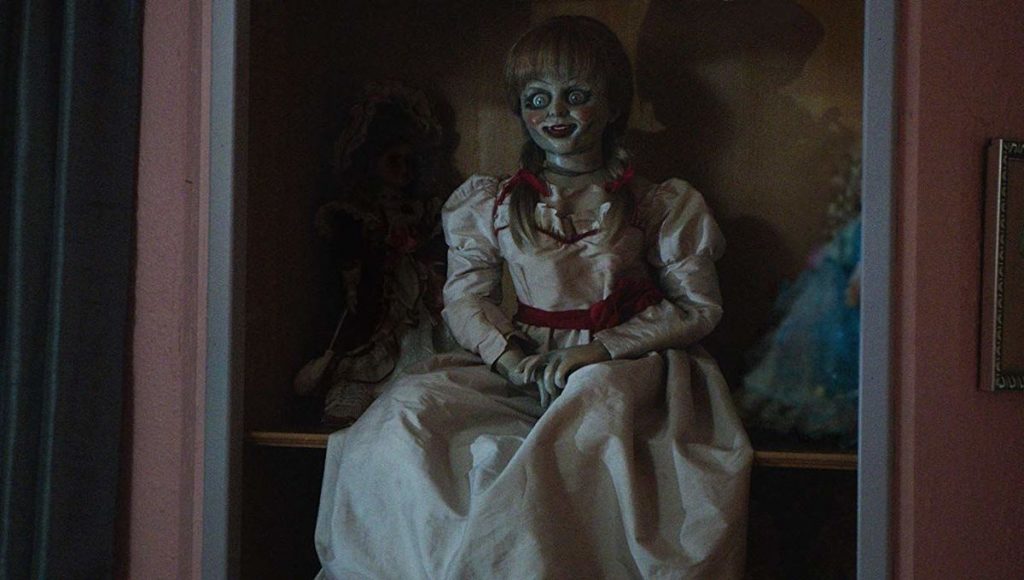 The Annabelle doll is one of the most storied spooky objects out there. The doll is still kept inside a glass case at The Warrens’ Occult Museum in Monroe, Connecticut. The doll has seen two movies made till date based on its legend, and soon we are about to see the third installment of the franchise. The movies are connected to the ‘Conjuring’ universe with the characters of Ed and Lorraine Warren. The Lorraine’s are a couple who researched paranormal activities across Europe and America and were of the belief that certain objects work as mediums for such supernatural entities. They have a museum at their house where they show such demonic items.

The Annabelle doll was first seen in the prelude to the 2013 movie ‘The Conjuring‘. The first story in the Annabelle series is about the Forms, a family who live in Santa Monica. The second story is a prequel to the first, and here we see how the Forms came in contact with Annabelle in the first place. It can be understood that the third story will deal with events that have happened after the Warrens bring the doll home.

2018 San Diego Comic-Con was the time and place when we first came to know about the third movie in this series. James Wan and Peter Safran were the ones who announced that the movie was underway. Patrick Wilson and Vera Farmiga were announced to have reprised their roles as Ed and Lorraine Warren. This movie will be directed by Gary Dauberman, the screenwriter of the first two movies of this series and ‘The Nun’ (2018).

Annabelle Comes Home Cast: Who is in it?

The Annabelle Comes Home cast will definitely be led by Patrick Wilson and Vera Farmiga. Mckenna Grace will be playing the role of Judy Warren, their daughter. We have earlier seen her in ‘I, Tonya‘ (2017). Wilson first showed major promise in the series ‘The Full Monty’ (2000-2001). Then we went on to perform in movies like ‘The Phantom of the Opera’ (2004), ‘Hard Candy’ (2005), and ‘Little Children’ (2006). However, he then came under a major spotlight when he appeared as Nite Owl II in the movie ‘Watchmen’ (2009). His performance in the second season of the critically acclaimed series ‘Fargo’ was also commendable. We recently saw him the movie ‘Aquaman’ (2018).

And as for Fermiger, she has been a phenomenal talent from her days of ‘Down to The Bone’ (2004) for which she had earned the Best Actress Award at the Sundance Film Festival and the Los Angeles Film Critics Association Awards. Her performances in the movies ‘The Boy in the Striped Pyjamas’ (2008), ‘Orphan’ (2009), and ‘Up in the Air’ (2009) have also been praiseworthy. It is sad that since joining the ‘Conjuring’ franchise she has not been more utilized by other filmmakers.

Annabelle Comes Home Plot: What is it about?

The plot of the third movie in the series and seventh in the franchise starts after the Annabelle doll has been retrieved by the Warrens after Annabelle’ (2014) and kept in their home inside a glass box. The Warrens have in real life said that this doll had the strongest demonic ‘tendencies’ than any other item in their possession, and this is what the makers are probably using to kick off the events of the third film. The doll, on being introduced to the room full of other haunted objects, triggers all of them and the Warrens’ house becomes one teeming with beings from the other side. Things turn for the worse when the daughter of the Warrens, Judy, becomes the target of these evil spirits.

The plot does not sound that promising, but in horror movies, what is more important is execution. Gary Dauberman produced well-structured stories in the first two movies of the series, but here one wonders whether the film might tend to be saturated will spirits and demons. Let us wait to see what Duberman has up his sleeve.

The movie is set to be released on June 28, 2019, as has been announced by the distributors, Warner Bros. Pictures.

Here is the trailer of the movie that released a while back.