New World: Everything We Know 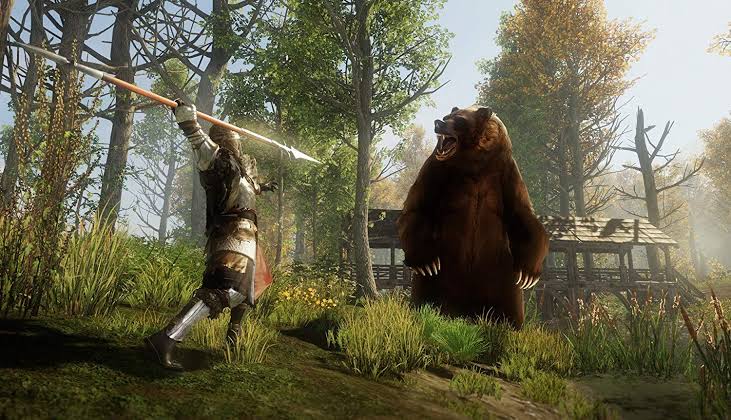 Amazon has its eyes on practically every potentially lucrative venture under the sun and now video games are one of them. Their video game development arm, Amazon Game Studios was founded in 2011 but mostly developed games for Android and iOS over the first few years of its existence.

However, there has certainly been a marked shift in Amazon’s outlook towards video games as of late, with the Jeff Bezos led multinational giant now seemingly committed to entering the video game industry in a big way. This is pretty apparent by their work on the impressive Amazon Lumberyard Game development engine and the slew of high profile games set to come out of Amazon Game Studios in the near future. One of these titles is ‘New World’, a vast open-world survival MMORPG game set to be released fairly soon. Read on to find out everything we know about the upcoming title ‘New World’.

New World Premise: What is it about?

‘New World’ is an open-world survival game with extensive MMORPG (Massively Multiplayer Online Role-Playing Game) elements. The game is set sometime in the mid-seventeenth century where players take on the role of pioneers and settlers seeking to colonize a new land known as Aeternum, a fictional supernatural landmass somewhere in the Atlantic Ocean that is rich in a substance known as Azoth, believed to be the source of eternal life.

The webpage for the game describes it as follows:
“Fate has summoned you to the shores of Aeternum, the Eternal Isle. Overcome the brutal legions of The Corrupted and draw battle lines with competing players in this land of danger and opportunity. In a land hell-bent on your destruction, what will you do to survive?”

Besides numerous other intrepid explorers such as yourself, Aeternum is also inhabited by menacing humanoid creatures, former settlers corrupted by an enigmatic malignant force. While some poor souls are reduced to nothing more than mindless zombies, others gain supernatural powers due to the effect of corruption.

From what we’ve seen thus far, it is fairly obvious that ‘New World’ is somewhat inspired by the European colonization of the Americas and Aeternum is remarkably similar to pre-colonization North America with swamps, mountains, lush grassland, and untamed forests. However, the game is certainly not historically accurate and incorporates heavy fantasy elements within the borrowed framework.

New World Gameplay: What to Expect?

‘New World’ is a survival MMORPG based in a vast open world. Think ‘ARK: Survival Evolved’ or ‘Rust’ with a greater emphasis on the multiplayer elements. You can do the usual survival game activities such as crafting shelters, managing your health, hunger and available resources as you try to endure an unforgiving new world.

However, ‘New World’ focuses much more on the player interaction and emergent multiplayer gameplay than other similar games. You can join clans, build huge forts, invade rival clan territories in massive hundred player battles or just explore the strange world with your friends.

Being a survival game, players must also deal with the world itself, which is filled with various monsters, zombie-like corrupted and other hostile elements. The monsters will routinely attack settlements in droves, forcing players to cooperate and coordinate in order to stave off the threat.

Despite its focus on the multiplayer mode, ‘New World’ will also have plenty of content for players who like to go at it alone. Plenty of the game’s main quests are specifically catered to solo players as well as gameplay mechanics that will make the journey a bit less unforgiving for the lonely explorer.

‘New World’ director Scot Lane also said that the game will feature a robust crafting system that utilizes the myriad resources available in the game world, including trees, bushes, boulders, the oil, wildlife and much much more. The crafting system is also tied into the game’s economy and players proficient in crafting can choose to sell their wares to other players across Aeternum.

Lane also says that the open world will be entirely accessible right from the beginning, with no gating of content behind progression requirements or story events. Certain sections are populated with higher-level enemies and are unsuitable for newer players but are accessible nevertheless. A viable solution for lower-level players in these situations is to be sneaky, which is enabled by the game’s stealth mechanics.

New World Developers: Who Are the People Behind the Game?

‘New World’ is being published by Amazon Game Studios.

New World Release Date: When and Where Can I Play It?

The release date of ‘New World’ is set for May 26, 2020. The game will be exclusive to the PC platform at launch. Players who pre-order the game will gain access to the private beta sometime in April 2020.

You can watch the trailer for ‘New World’ right here.