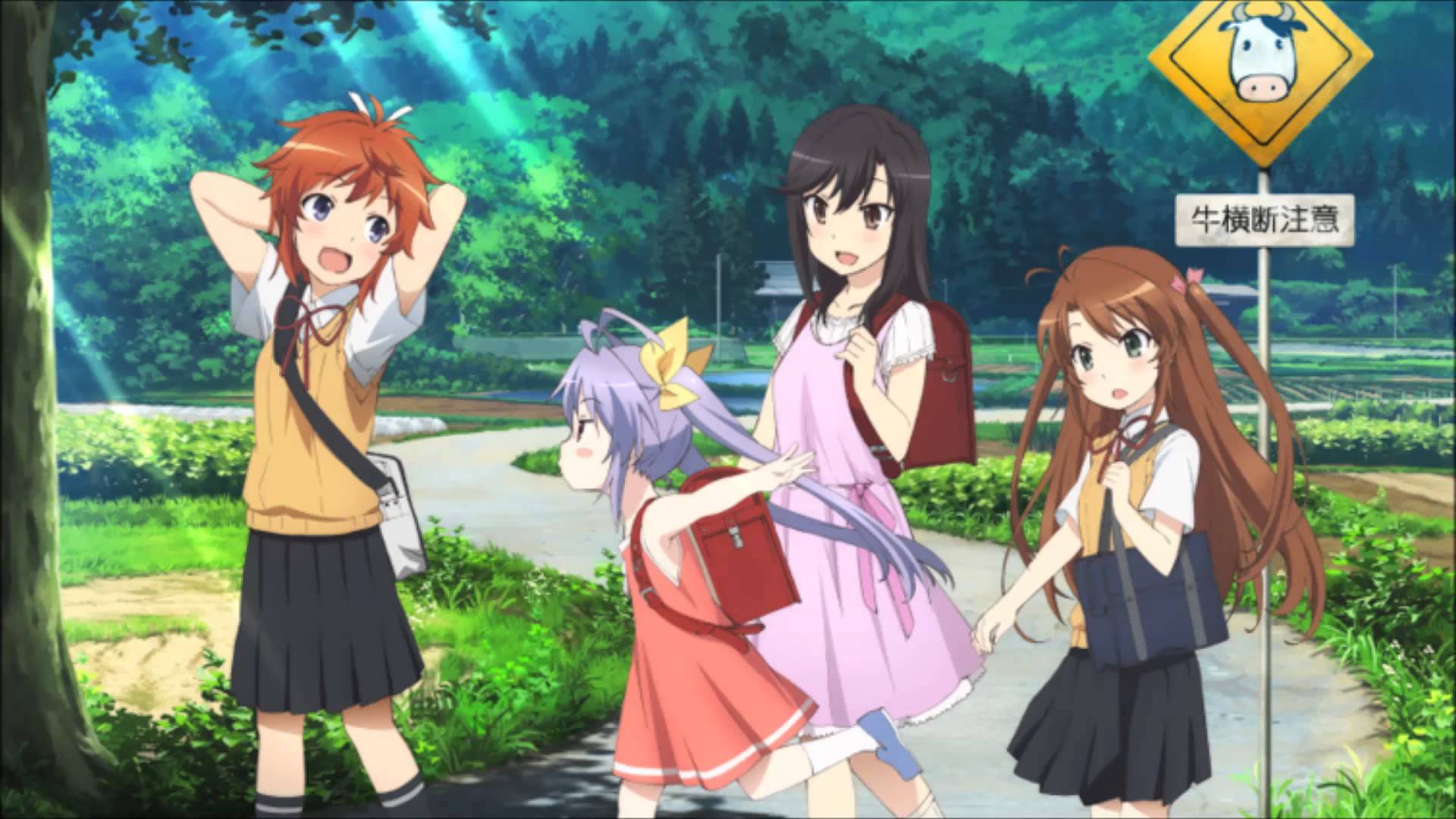 Having a really bad day or life just seems way too stressful? Just turn on your device and tune into ‘Non Non Biyori’; within a few minutes, all your worries will fade away and you’ll feel better about life all over again. Everything about it including its sound, art, animation, characters, and the story, are perfectly crafted to have a maximized feel-good experience. You’ll have a smile on your face throughout its runtime as the show offers humor that is suitable for almost all ages and at the same time, it is not downplayed in any way. The plot can get a little boring with time but the rest of the elements of the show certainly make up for that as well.

The one thing that ‘Non Non Biyori’ really thrives on is its music and breathtaking visuals. Most viewers usually focus on the characters and the story of anime but in this case, the art just immerses you into the emotions of the show and you can’t help but appreciate it for what it is. It’s almost like going through an art gallery or the reminiscence of a very high budget film that you really admire. The entire series is a work of art both figuratively and literally with its incredibly detailed artwork and unforgettable music. Overall, ‘Non Non Biyori’ is the kind of anime you can rewatch again and again every time you want to relax and get lost in its charm. Despite having just 12-episodes in the first season, its pacing can be a little slow, so you need to be in the right mindset to watch it. But once you are in the right zone, it is indeed a pure pleasure to watch.

Non Non Biyori Season 3 Release Date: When will it premiere?

‘Non Non Biyori’ Season 1 aired from October 8, 2013 to December 24, 2013. Soon after this, the second season premiered on July 7, 2015 and with a total of 12 episodes, it came to an end on September 22, 2015. This was then followed by a sequel movie titled ‘Non Non Biyori Movie: Vacation’, which was released on August 25, 2018. The anime has undoubtedly done exceptionally well since its release and has a huge well-deserved fan following. Even the manga, that published its 13th volume in November 2018, has sold close to 1.75 million copies over the past few years.

Leaving an anime like this one on a hiatus would be a mistake on the Studio’s part and this is something they clearly understand because they have already announced the release of season 3. Now that the news is all official, we won’t have to wait too long for its release and we expect it to ‘Non Non Biyori’ Season 3 release date to fall sometime in June 2020 or later. We will update this section as soon we come to know about its official release date.

You can watch ‘Non Non Biyori’ on Crunchyroll and HiDive with its original Japanese audio and English subtitles.

If anyone had to describe Asahigaoka with one word, they simply call it a “typical” countryside but there is a lot more to it than what meets the eye. And only when you meet the five different students of varying ages in the only school that is there in town, you realize how amazingly colorful the whole place is. Out of the five, the youngest one is the fifth grader Renge Miyauchi who fascinates everyone around her with her wits and curiosity. Then we have the Koshigaya siblings that consist of the silent ninth grader, Suguru; the petite eighth grader Komari; the naughty troublemaker Natsumi. And finally, we have the extremely overdeveloped and mature, Hotari Ichijou, who in a way leads this group with her lively and vibrant nature.

‘Non Non Biyori’ is based on a manga written by Atto and chronicles the adventure of these five school going kids who deal with their day to day problems and also deal with the troubles of growing up in a rural area. They create their very own brand of fun and enjoyment and playfully deal with all the problems that come in their way.

Hotaru Ichijo is one of the main protagonists of the anime who is always curious about everything that is going on around her. Being from Tokyo, she is a bit taller than most of the villagers and has black hair with brown tsurime eyes. She is really smart for her age and also looks a lot older than she actually is. She usually plays the role of an older sister for most other characters and has a huge crush on Komari Koshigaya. She is a very responsible person and pretty much everyone can rely on her. At home, she acts all childish when she’s around her mother but no one else has seen her this way. The only reason why she moves from Tokyo to the countryside is because of her father’s consistent work transfers. During her childhood, she had visited the village several times to meet her relatives who live there.

Komari is another female lead of the story who is Natsumi’s older sister and Suguru’s younger sibling. Out of all the kids at school in the village, she is the eldest. She has long brown hair and emerald green eyes and is often seen in childish clothes despite the fact that she actually wants to look mature. She’s a smart girl but is really insecure about her looks. She wants to look like a grown-up woman and hates that even Hotaru, who is in the fifth grade, looks older than her. She feels left out when she’s around her classmates because of her childish behavior. She works really hard to do well at studies, but Natsumi drags her into trouble all the time. She is very superstitious and believes in the supernatural. Natsumi takes this for granted and tries to scare her by playing pranks.

Natsumi is the youngest of the Koshigaya siblings and is known for her mischievous ideas to have fun with everyone around her. She has bright orange-red hair and blueish grey eyes. She usually wears boyish clothes and has a very messy appearance. Natsumi easily gets into trouble but also knows how to sneak her way out of it by blaming others. A lot of times, Komari becomes the victim of her blame and being the matured one, she has to handle Natsumi’s mistakes to protect her younger sister. Unlike her sister, she is also very irresponsible and barely cares about her grades. Her mother often scolds her for being so careless about everything but she doesn’t really care.

Out of the three siblings, she is the only one who gets along well with Renge and takes all of her questions seriously. Though she is the youngest sibling, she is much taller than Komari, who envies her for this. Despite being really bad at academics, she excels at extracurricular activities at her school.

Renge Miyauchi is another female lead of the series who is a first class student at the Asahigaoka Branch School and is the youngest girl in Miyauchi family. She has brown eyes and violet hair that she keeps tied up into two pigtails with long yellow ribbons. She is a very curious child who always has questions about everything around her. But sooner or later, everyone gets sick of her questions and Natsumi is the only one who takes them seriously. She also enjoys making her own songs and has a very creative way of giving nicknames to others. She is very cheerful and loves being around people, especially with Natsumi, who calls her “Ren-Chon”. She does really well at studies and also demonstrates extraordinary artistic abilities for her age. Though she is very social and is also quite affectionate towards the people around her, she is rarely seen with a smile on her face.

You can watch the trailer of ‘Non Non Biyori’ season 3 below: