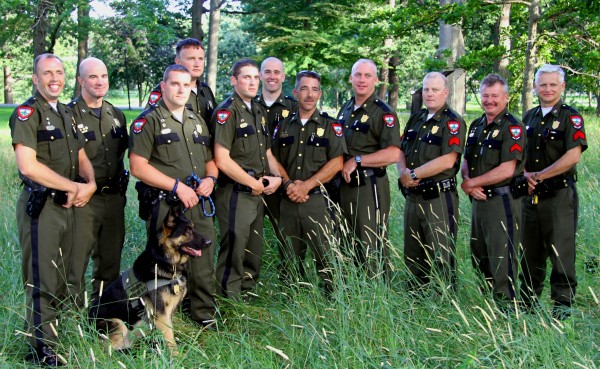 North Woods Law is an American reality television series that airs on the Animal Planet Channel. It premiered for the first time on March 11, 2012. It is narrated by Charles Parnell and produced by Engel Entertainment. Jessica Winchell Morsa and Mick Kaczorowski are on board as executive producers. The show follows various game wardens of the Maine Warden Service in Maine. It changed its location with the members of the Game and Fish Department in 2017 to New Hampshire. During a risky and busy hunting season, the elite game wardens have to navigate the state’s uneven lands. The show is executive produced by Jessica Winchell Morsa and Mick Kaczorowski.

The elite workers of the Maine Warden Service have to face both danger and drama while navigating the rugged terrain. From catching drunk drivers on ATV’s to rescuing wayward woodsmen and from tracking bears on mountain ranges to working undercover stings, the elite workers have to save the people and protect the animals of Maine. The show also tries to tell the viewers about the game and fish officers in New Hampshire, who work day and night to protect and save the natural resources of Granite State. These rugged landscapes draw thousands of outdoor enthusiasts. It has garnered a loyal following over the years.

North Woods Law Cast: Who is in it?

Since the show has moved to New Hampshire, we can expect all members of that cast to return in the upcoming season, and probably their ranks will be strengthened by the addition of new officers who will be looking to enforce the law in what has been called the Wild West of New Hampshire.

North Woods Law Plot: What is it about?

‘North Woods Law’ basically follows the members of the Fish and Game Department in New Hampshire. Danger and drama are around every corner, but the wardens navigate this each day. The show offers a wide variety of visuals, from scenic views of mountains, forests, and the seacoast, to animals like raccoons and rattlesnakes. We get to see exactly how complex the duties of the officers are, who are not only in charge of wildlife management but also search, rescues as well as law enforcement. The aim of this show is to stand out from other reality police shows and to “create a show that puts forth a positive view of the impact they have on natural resources, tourism, and the state’s economy.” However, the show has had its share of controversy, with the governor of Maine saying that he had a hand in ending the show’s run there as it was negatively affecting the state’s image.

The series does a good job of making the officers of the law famous, due to the almost rabid popularity it garners among fans of the area the show shoots in. Even among workplace reality shows, ‘North Woods Law’ stands out since it displays unaffectedness and restraint. The wardens come across as genuine, and their jobs are portrayed realistically. For the most parts, it includes checking for hunting and fishing violations, while some of the more dramatic moments arrive when they have to search for people who go missing in the woods or the waters.

Unlike other police shows, the officers in the show are not menacing, they are shown to be decidedly human, and thus their interactions too, have a degree of respectfulness and come across as touching. Steve M. Engel, the president of the company producing the show, Engel Entertainment, said, “What we did not want to do is a show in which we saw police chasing people down, throwing them on the ground and screaming at them.” As we go into the minds of the law enforcement officials, we also see how they need to make snap judgments about whether the violation warrants a citation or if the law can simply be explained to those breaking the rules. Although their job is to catch intentional violators, they end up just trying to get people to comply with the rules for a major part of their time.

Needless to say, the show’s popularity has enhanced the image of the wardens, whose effect can be seen in real life as they go about their work. Moreover, they have succeeded in influencing a younger generation who want to walk in their footsteps. While a lot of people like these wardens since they do not have to deal with hard crime, it would be foolish to assume that their jobs are not dangerous as most of the people they encounter are carrying some sort of knife or gun, albeit for hunting. The presence of danger is imminent even though the motives behind carrying these weapons might not be malignant.

What stands out about the show is the way it portrays law enforcement as something positive, and the officers are humane in our eyes. The episodes are also smartly interspersed with some kooky duties these wardens have to fulfill, like rescuing a moose. The point is, as Sergeant Thrasher of the Maine edition of the show had said, “I think one reason people like the show is that it doesn’t just show bad stuff”. The way it captures life amidst nature, showing how the officials work hard to protect the nature and ensure everyone has a good time, is something that the viewers appreciate.

Hopefully, in the upcoming season, the show will continue in a similar manner as we get to see more of these wardens in action, and we hope for some major cases to come up just so things become even more interesting for us viewers.

North Woods Law Season 13 Release Date: When will it premiere?

‘North Woods Law’ Season 12 premiered on February 19, 2019. While Animal Planet has not announced anything about Season 13 of the show yet, there is a good chance that it will get renewed considering the popularity of the show. Since production does not take too long, one might expect Season 13 to air sometime later in 2019, or in the earlier part of 2020. However, do stay tuned to this section for any updates about the official release date.

While we wait for the release date of season 13, check out the season 12 trailer to refresh your memories.