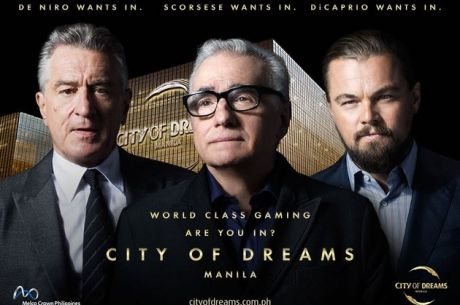 Leonardo DiCaprio and Robert De Niro have undoubtedly been the favorite actors of Martin Scorsese, and while we may have seen a young DiCaprio alongside De Niro together in a little movie called “The Boy’s Life”, never have the new and old muses of Scorsese worked together with the legendary director.

This time around we get to see both of them face off against each other in a commercial promoting 2 casinos of the ‘Melco Crown Entertainment Limited’. One in Macau,China and the other in Manila, Philippines. However this is not your average commercial. With a budget of 70M for a 2 day shoot, one can only expect something like nothing before from such big names in the industry. Allegedly, the actors were paid 13 million each for the 2 day period of shooting.

Oscar nominated writer of ‘The Wolf of Wall Street’, Terrence Winter is also attached as writer for the commercial. If all of this wasn’t enough, Brad Pitt is also pinned as one of the characters of this short film/commercial although the trailer hands us with just a still frame of him.

As you would have noticed in the above teaser , all the signature Scorsese moves are shown in all its glory. Great classic rock, sweeping pans, fast cuts and as we can see, his regular set of cast and crew. Scorsese’s feature-length film ‘Casino’ surprisingly had a lower budget in comparison to this one. I for one will be expecting a complete Scorsese experience from this commercial ‘The Audition’ during the global première at the launch of Studio City at Macau mid-2015.