On Becoming a God in Central Florida Season 2: Premiere Date and Cast 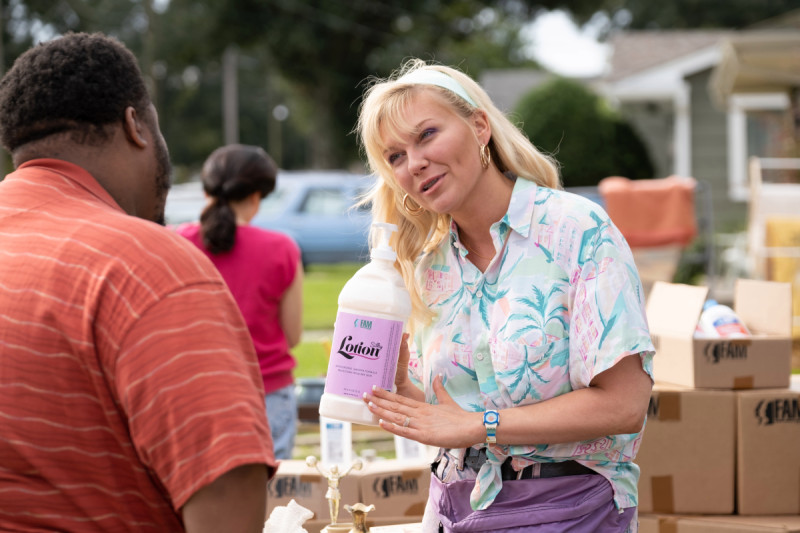 ‘On Becoming a God in Central Florida’ is a dark comedy-drama that airs on Showtime and is created by Robert Funke and Matt Lutsky. With George Clooney and Grant Heslov on board, among a crew of progressive executive producers, the series is about the realization of the American Dream, set against a backdrop of the 90s.

The story follows a minimum-wage-earning employee in a water park in Florida, who climbs the ranks of Founders American Merchandise (FAM), through her endless schemes. FAM is a multi-billion dollar pyramid business that had previously ruined her family and this story chronicles her journey toward seeking a better life, coupled with her quest for revenge.

The first season of the show was very well received. Recognizing the overall good response, Showtime renewed the show for another season. Here’s everything we know about On Becoming a God in Central Florida season 2.

On Becoming a God in Central Florida Cast: Who is in it?

The cast of ‘On Becoming a God in Central Florida’ is led by ‘Fargo‘ and ‘Spider-Man‘ star Kirsten Dunst as Krystal Stubbs. Accompanying her is Théodore Pellerin as Cody, Mel Rodriguez as Ernie, Beth Ditto as Bets, Ted Levine as Obie, and Alexander Skarsgård as Travis Stubbs. Actors in other recurring roles include Usman Ally as Stan Van Grundegaard, Cooper Jack Rubin as Harold Gomes, Julie Benz as Carole Wilkes, and Melissa De Sousa as Mirta Herrera.

All the above cast members are expected to return for season 2.

On Becoming a God in Central Florida Plot: What is it about?

After ‘Florida Girls‘ and ‘David Makes Man‘, it seems that Florida has become synonymous as a melting pot for people, struggling and scheming to achieve their goals. Yet another story from this Sunshine State is ‘On Becoming a God in Central Florida’ — set against the 90s backdrop — which is a comedic take on American dreams and delusions. It follows a woman and her determination to make a better life for her and her family as she climbs up the ladder of Founders American Merchandise.

The tale takes us to a small town near Orlando in 1992, home to Krystal Stubbs and her husband Travis Stubbs. Krystal is a starry-eyed dreamer while Travis works as an insurance salesman. He is getting increasingly frustrated with his job, his modest, single-story house, and compact car. On the other hand, Krystal is employed in a local water park where she earns a meager income. Travis, in his race toward an affluent life, spends most of his spare time recruiting contractors, who deposit a part of their profits with him, who in turn sends a fraction of it to his “upline,” Cody.

All of them, in fact, form a part of FAM, a pyramid scheme, that’s a scam — run by the powerful Obie Garbeau II. Krystal, on the other hand, can see clearly through everything. She tries to keep her family together while raising her newborn baby and earning a modest salary. But once this sham of business drives her family to ruin, she vows revenge. And through her eyes, we witness the struggles of the working class in America — plagued by moneylenders, debts, and a hierarchy that is simply impossible to penetrate.

Krystal, determined to better her life, dives deep into FAM and lies, schemes and cons her way up to its ranks. Along the way, she makes many complicated relationships, such as the ones with Cody, Ernie, and Bets. However, things take a more complex turn when her actions start affecting those closest to her.

Season 2 will continue following Krystal, her journey, her struggles and her rise to the top of the pyramid scheme. You can expect a few unexpected twists and turns along the way.

‘On Becoming a God’ does a wonderful job in establishing that connection between the con men of FAM to politicians, corporate overlords, and the wealthiest families in the country. It is a reflection of American capitalism. In its own comic way, the show narrates a tale where the American Dream is destroyed for those who believe in it. A seamless satire and an engaging dramedy, is shall make you laugh, and still empathize as you relate to each of its characters.

On Becoming a God in Central Florida Season 2 Release Date: When will it premiere?

The good news for the fans is that just one month after season 1 premiere, on September 26, 2019, Showtime renewed the show for a second season.

“With such imaginative storytelling and an absolutely inspired lead performance, On Becoming A God In Central Florida has been a revelation,” said Jana Winograde, President of Entertainment, Showtime Networks. “Kirsten, Esta, Robert, Matt and Charlie have crafted a wondrous blend of satirical light within the economic and emotional melancholy that confronts so many Americans. We couldn’t be happier that On Becoming A God is on Showtime, nor more eager to see what wild events await our ensemble in the downline of season two.”

While no release date was revealed in the announcement, ‘On Becoming a God in Central Florida’ season 2 is expected to come out sometime in August, 2020.

On Becoming a God in Central Florida Trailer:

While we wait for season 2, here’s the official trailer for the first season of ‘On Becoming a God in Central Florida’.